In the War on Opioids 525-nm LEDs Offer Hope

When it comes to managing chronic pain, a simple solution may be the best solution
01 October 2019
By Ford Burkhart
Technology
Credit: Bob Deemers/UANews

At age 15, Cindy Chillock was already battling chronic pain that would last a lifetime. Finally, at age 69, she has discovered a new weapon to use against that old enemy. It is simple, surprisingly effective, and almost free. Essentially, it's green LED light.

"It has improved my whole life," she says.

Now, keeping her string of green lights nearby has become her way to cope with crippling pain from interstitial cystitis. She plans to light them up on a cruise to Cabo San Lucas in Mexico.

Her personal success was part of the pioneering work by Dr. Mohab Ibrahim, director of the Chronic Pain Management Clinic at Banner-University Medical Center in Tucson, Arizona. His team, he says, was the first to fully characterize the effects of green light on pain in animals. And his work has shown solid benefits to humans with three top pain challenges—fibromyalgia, migraines, and interstitial cystitis.

Ibrahim convinced Chillock that his technology offered real hope when she thought she was out of options. She had to learn a new word for our body's opioid-like natural particles: enkephalins, derived from the Greek word "kephale" for "head." These painkilling proteins are found in everything from our earthworm cousins to us. Because the green light therapy triggers enkephalins without the harmful effects of opioids like morphine, oxycodone, or fentanyl, exposure to green lights, he told her, would release the body's own endogenous opioids.

"It was noninvasive, not your typical Western medicine," she recalls. "It was worth a try."

Chillock joined a ten-week-long pilot test, with daily periods of exposure to ambient green light at the 525-nm wavelength, the middle of the green band. The light was at a low intensity, just enough to let her read in an otherwise darkened room. The study recorded pain scores, medication use, and quality of life, and she showed improvement in all three areas.

Ibrahim says some of his early study participants began with migraines causing baseline pain scores of about 8/10, a score reflecting pain so severe it almost precludes any activity, even talking. Their scores fell to about 3/10—signifying mild, annoying pain—after green LED light treatment. "That's a reduction of more than 50 percent," Ibrahim notes.

Like the other participants, Chillock switched on her LED lights, rather like those on a Christmas tree, for about two hours a day. From the first week, she says her pain intensity was reduced enough that she could cut back on opioid painkillers usage by about 50 percent and fall asleep more quickly.

She says, "I felt a sense of hopefulness coming back into my life."

The NIH has reported that chronic pain affects more than 100 million Americans and takes a toll of upwards of $630 billion a year. Thus, some form of green LED therapy could mean huge savings in treating those with chronic pain, and it would be a lot safer.

Managing pain with a green LED light has no reported negative side effects, unlike sedatives—which can be fatal if respiratory arrest occurs—or a gradual buildup of tolerance to opioids, which leads to a need for a steadily higher dose to get the same effect.

And helping reduce use of pain killers, says Ibrahim, is the strongest factor motivating his work on green light as a complementary approach to prescription opioids.

For Ibrahim, who is also UA associate professor of anesthesiology and pharmacology, a family encounter got him thinking about phototherapy for the first time.

His brother suffered from headaches, and instead of taking pain medications, he simply went out to his backyard garden for a short time.

"Basically he gets better," says Ibrahim. "This was just his story until I got a headache one day, and I had no analgesics at home. While driving to the pharmacy, I remembered my brother. So I stopped at a park and sat among the trees there for 20 minutes, and my headache also started getting better. I thought of possible factors. The quiet environment. No stress. I was meditating in a way. Honestly, my headaches never get better during such a quiet time in my office."

That large park has acres of grass and trees. "Maybe the trees were giving off something," Ibrahim guessed. "Or maybe it was just the green light reflected from leaves."

Green light, he thought, was the common element between his brother's garden and the city park. He decided to investigate.

Starting with animal models, he found that rats exposed to only green LED light—at about 4 lux, a very faint light from just one LED mounted on their cages—experienced less pain from, for example, contact with heat. The diminished pain was measured by how quickly they withdrew their paw from an irritant. Remarkably, the lab found that the lowest intensity light was sufficient to delay paw withdrawal, whereas the highest brightness was less effective.

In some of the rat experiments, the team employed special optical filters in the form of contact lenses—a step that resulted in researchers being bitten several times, Ibrahim recalls with a laugh—to allow the desired wavelength to pass through to the rats' eyes when they were exposed to white light. "This may be a future direction we will explore in human studies," Ibrahim said.

As a control group, rats equipped with tiny opaque contact lenses did not display any benefit. Thus, Ibrahim and his colleagues concluded that the analgesic effect of phototherapy took place through the visual system and not from being exposed through the skin.

The rats exposed to green light showed reduced pain in a day or two. Ibrahim says he was so stunned at the early rat results that he repeated those experiments five times. Yet while the results were impressive, the question remained why the green light caused such a drastic reduction in the pain response.

"From the eyes to the spinal cord, we don't know yet exactly the path taken by these signals," Ibrahim says. "We believe there is involvement of the endogenous opioid system, but this may not be the only mechanism of action. There may be a synergy with the inflammatory system and other pain mediators in the body. We are just scratching the surface."

One theory is that photons of green light reach the back of the patient's eye where they generate signals in the form of electrochemical telegrams. The signals travel in a neuronal network in the brain, through the optical nerve and other pain centers, until they eventually reach the spinal cord. At that point, the signals result in increased transcription of messenger RNA (mRNA) molecules. mRNA is necessary to create protein or peptide products such as enkephalins, which are pentapeptides that regulate the sensation of pain and act on opioid receptors to result in pain relief.

The research team was able to trace this path in rats, and they measured the resulting enkephalins from spinal cord tissue samples after the therapy. They also measured the increase in mRNA produced in blood samples.

Building on this encouraging data from the rat research, Ibrahim began human studies, in which 35 participants spanning three major categories of pain were exposed to LED light at levels as low as 4 lux and as high as 100 lux. The humans were asked to observe LED light for one or two hours a day. It was a big request, he admits, but he started at a level he knew really worked in the animal studies in order to establish a proof of concept with humans.

"Do they really need two hours?" he asked. "It could be less, and I would hope that we will need less time. The next step will be to test with 15 minutes and 30 minutes and more. But first, we needed the proof with one to two hours each night. Later we'll optimize that effect." 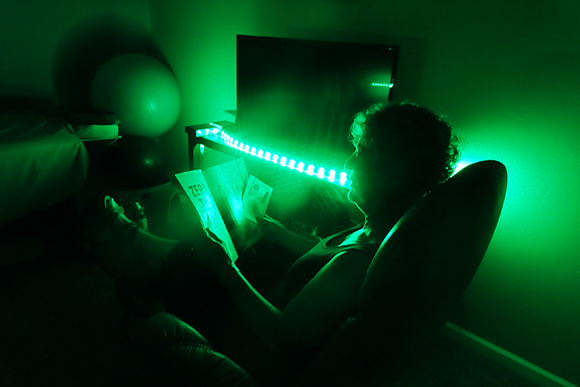 Overall, patients' pain was reduced by an average 60 percent, Ibrahim says. For those with migraines or fibromyalgia, opioid use dropped from a daily average of 280 morphine milligram equivalents, or MMEs, to about 150 MMEs during the pilot testing.

After Ibrahim reported his findings in April to the 2019 meeting of the American Pain Society in Milwaukee, several experts found the study promising.

At Duke University, Padma Gulur, professor of anesthesiology and specialist in pain management, says the Arizona project is an encouraging part of a small number of studies around green light therapy, including her own NIH-funded randomized green light trials. She believes the independent Duke and Arizona projects are on the leading edge of phototherapy with green light. "It's a new and exciting field," she says. "It is low cost and easy for patients to adopt and comply with." In her case, post-operative patients and chronic pain victims are also seeing benefits from being exposed to green light for a few hours a day. "It's still early, but green light holds a lot of promise to reduce the pain medicine requirements of patients," says Gulur.

Ibrahim says his team is still in the early stages of what he predicts will be a long trajectory of research. Not all the patients responded to the green LED therapy, but he says he's proud that he helped "an overwhelming majority" of patients in early testing. Now, he says, "We are investigating how effective this will be in a bigger population."

Ibrahim's team is also expanding their work in several directions. For example, they plan to use phototherapy with HIV patients who have experienced persistent pain, a common side effect of HIV that is often treated with neuropathic pain medications and sometimes with opioids. The ground work for this project is being funded by a $1.7 million grant from the National Center for Complementary and Integrative Health, part of the National Institutes of Health, to advance his study of effects of green light on HIV positive rats before translating the therapy to humans.

Clinical applications, Ibrahim predicts, could include a range of new technologies including special contact lenses or sunglasses, or new LED devices to deliver the precise intensity and wavelength of green light.

"We are discovering something new every day. It is a wholly different way of thinking. What we are doing is somewhat unorthodox, but you can't argue with the data."

-Ford Burkhart has covered science and medicine for The New York Times and writes about photonics for the optics.org newsroom.