Optical engineer William T. Plummer didn’t realize it 50 years ago, but the 1972 debut of the Polaroid SX-70 Land Camera, which he helped invent, would go on to become both an icon of the “Me” generation as well as a reference point in optics design for an approach today known as freeform.

Freeform optics are lenses or mirrors with surfaces that have no rotational symmetry. Experts like Plummer say the concept traces back more than 100 years ago to progressive lenses—spectacles that were manufactured to adjust the eye’s focus by varying degrees of power, all on one lens.

Former Director of Technology and Strategy at custom optics maker Optimax, Jessica DeGroote Nelson, suggests an analogy for understanding freeform. Most people are familiar with PowerPoint software and the ability to move through a slide presentation from beginning to end, she says. “But have you ever heard of Prezi? It’s a really cool platform. You don’t have to go in a linear order, you can move around, zoom in....Freeform is like that. You can go off-axis and make things, and there are more degrees of freedom in your design space. It’s a massive change in how we think about designing optics.”

But in both form and function, the collapsible Polaroid SX-70 camera and its freeform components make a good starting point for understanding the freeform design approach, how it has evolved in recent years, and its promise.

The SX-70 camera and its successors were a decades-long hit for Polaroid that sold by the millions. From a flat, portable 10.5 x 18 x 3 cm-rectangle that could be carried in a purse or briefcase, the camera would snap open to a locked, upright position. The photographer could look through a viewfinder, focus an image as close as about 10.5 inches, and press the shutter button. In less than two seconds, a cartridge at the base of the camera would eject an 8-cm-square, self-developing Polaroid color print. 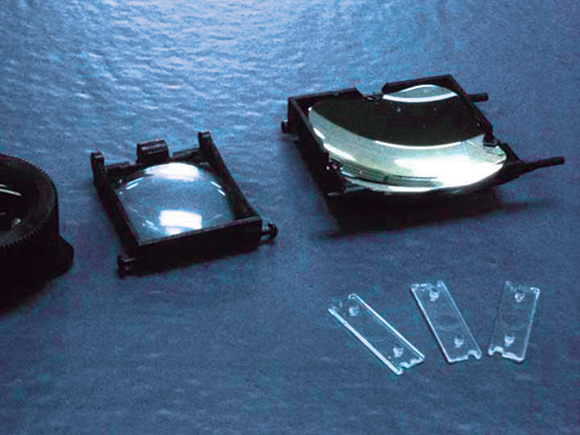 Actors Candice Bergen—herself an accomplished photographer—and Laurence Olivier extolled the camera’s virtues on television commercials. Artist Andy Warhol toted his beloved SX-70 almost everywhere he went in the ’70s, snapping instant photos of New York City celebrity partygoers, and even trash in trash cans. In 2020, long after Warhol’s death, one of his SX-70 cameras with a tan leather finish sold at auction for more than $13,000.

And in 1973, the Polaroid camera even made it aboard NASA’s Skylab, the US’s first space station, where astronauts used it to document scientific experiments.

The innovative SX-70 camera worked because of its purpose-built optical components, including freeform. At the time, Plummer says, he and his coworkers at Polaroid, who included pioneering optics designer James G. Baker, were simply trying to meet the demands of their visionary boss, Edwin H. Land, cofounder of the Polaroid Corp. He carried a mockup of the camera’s basic design to show the portability he wanted but looked to experts like Plummer and Baker to build an optics system for it that would work. And making the SX-70 work—with its tilted and decentered viewing—Plummer says, “was a bit of a challenge.”

For example, the designers found that if they used a spherical shape for a concave mirror that sends light into the viewfinder of the camera, it would cause a distortion that made the image appear smooshed at its upper edge. To correct this, they made the mirror nonspherical, becoming flatter towards the top. For the photographer, it was enough to lift the upper edge of the image seen in the viewfinder, thus resolving the distortion.

But changing the shape of the concave mirror introduced another problem called field tilt. The image would appear closer at the top than the bottom. This was corrected by using a freeform for the eye lens so that its power was progressive from top to bottom, realigning the image.

“I was around 30 years old at the time, and Edwin Land was about 60,” Plummer says. “It took me a while to realize my eye had to refocus going from the top to the bottom of the picture. But Land said to me, ‘I can only see one little sharp region.’”

Plummer realized that Land had presbyopia, the loss of the eye’s ability to focus that happens with age.

The progressive power freeform surface on the eye lens solved that changing focus problem, a big help for older users. But the eye lens freeform and the concave mirror aspheric surface together introduced a new difficulty, a change in focus between the top and the bottom of the eye pupil. This was coma, a problem for all ages. The human eye has no muscles to correct it.

While a freeform contact lens on the photographer’s eye could have fixed the coma, Plummer realized that was not commercially realistic. Instead, Plummer installed a freeform aspheric corrector plate near the aperture stop of the camera’s viewfinder. Because it is imaged onto the pupil of the eye by both the concave mirror and the eye lens acting in concert, it functions as a virtual contact lens.

Asked where the term “freeform optics” comes from, Plummer replies, “I don’t know. I gave a talk once for a meeting. It was a keynote on freeform stuff, and I was kind of surprised by the invitation. Then they told me I was one of the pioneers! So, I had to talk.”

Because they were making a commercial product, Plummer and colleagues also had to devise techniques that included some of the first computer-assisted optics manufacturing. “At the time, I knew there was a whole industry out there making interesting shapes for things like turbine blades. We bought a machine that was like a big milling machine that was controlled by punched tape from a computer. It took a long time on a telephone line to get punched tape that didn’t have errors in it!”

For metrology, Plummer used a laser-guided profilometer to measure critical dimensions of the optical surface. He could then manually check results against established mathematical formulas to ensure accuracy of the molding tools and of the final product within ophthalmic tolerances. 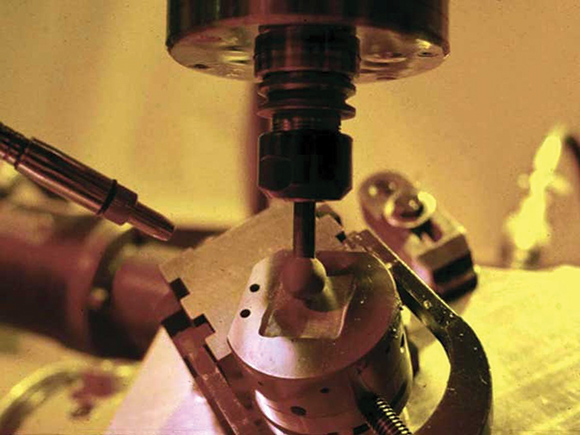 The freeform molding tool for the SX-70 camera eyelens is ground to shape by a CNC machine. Photo credit: William Plummer

In the early 2000s, with the advent of digital cameras and the demise of the original Polaroid Corp., the SX-70 and its freeform optical components faded into photography history. But a renewed interest in freeform has been picking up speed over the past decade or so. It is enabled in no small part by computer numerical control (CNC) technology—that is, preprogrammed computerized control of tooling equipment including drills, lathes, grinders, polishers, torches, and 3D printers. With rotational symmetry eliminated, mathematically precise control of optical surfaces is a must.

“After over 125 years of design, polishing, and testing lens elements with rotationally symmetric, often spherical surfaces placed in round tubes—including single-lens-reflex cameras and microscope objective lenses—computer control has come along to interject advances that are rapidly changing the field,” wrote Jannick Rolland of the University of Rochester, and the late Kevin Thompson of Synopsys Inc., in one seminal paper on the subject.

The expanded possibilities with freeform include using a variety of noncylindrical shapes and surfaces imbued with customized optical properties. Freeform optics can reduce the number of components needed in a lens and quash chromatic aberrations that can plague traditional optics. For example, a freeform optical component used in illumination systems can increase the light energy efficiency by controlling the light intensity distribution. A freeform reflector might be a driver-side mirror for an automobile that provides a large field of view. Lenses and mirrors with complex shapes or freeform surfaces can be a good solution for devices that require easy system integration in terms of weight and size.

While many freeform optics applications are made with glass, other materials include metals and polymers. Even water droplets, their shape controlled by electrical charges, have been investigated as a type of freeform optics for microscopic applications.

“For me, it started when I was working on a head-worn display for augmented and virtual reality,” says Rolland of her interest in freeform that began in the early 2000s. “In doing so, I realized we were going to need more complex surfaces and shapes—we couldn’t just do it with conventional optical designs.”

When Rolland moved to the University of Rochester in 2009, she says, “There was no mathematical theory behind freeform optics, nor dedicated manufacturing equipment or standardized process chains. It was difficult to deliver on the technological promise of freeform on a broader scale.”

So, in 2013, with support of colleagues at the university, she established the Center for Freeform Optics (CeFO) in collaboration with the University of North Carolina (UNC) at Charlotte, with backing from the US National Science Foundation. It is an industry/university cooperative research program that includes industry affiliate members, where Rolland is the director.

The mission of CeFO is to advance the science and applications of freeform optics through industrial partnerships. In addition to producing design, machining, and process chains, the center investigates new materials, manufacturing methods, and metrology.

“One of the reasons we have joined [CeFO] is because they are really striving to not only have a better standardization of the design space and to expand the design space, but they also have the metrology,” says DeGroote Nelson. “With freeform, as with most optics, you’re going to be limited by how you’re able to measure the optic. And so, if you can’t measure it, you can’t make it.”

At UNC Charlotte, CeFO site director Thomas Suleski says freeform materials under investigation include glass, plastics, and metals as well as other materials like germanium, zinc sulfide, and silicon carbide. The material used can depend on whether an application is transmissive or reflective of light as well as on the transmission ranges, from extreme UV light to the infrared.

Suleski says, for him, the excitement about freeform is what it can enable. “By getting rid of the requirement for symmetry, you can start thinking outside the box in terms of what the system looks like, where does the light go, and where it can be used. We can add new types of functional performance or operation: It can make existing systems perform better, and it can be used to make systems smaller and lighter.”

A critical function of CeFO is training students who will further develop freeform optics design in the years ahead. “The center wouldn’t run without them,” Suleski says. “The students that do well in CeFO projects do very well overall. The projects are challenging and fairly aggressive. There’s guidance and supervision from faculty and regular interaction with industrial partners. It’s a little different than some academic research where you might just go off on your own to work on an idea and then write a paper.”

It’s an environment perhaps not so different from Plummer’s experience at Polaroid working on the SX-70. “We were making the general shape [freeforms] pretty early in the game just knowing what could be done with modern machinery,” he says. “But if you look at the work we did to get that into production—what I did, what Jim Baker did…. There were at least 15 people and not one of them could have done somebody else’s job. It was real teamwork.” 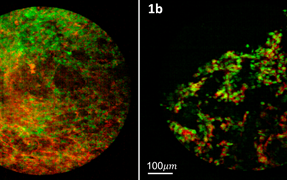 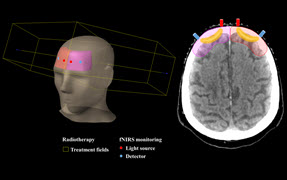