The Gorodetsky Lab explores the properties of structural proteins known as reflectins, which play crucial roles in the functionality of cephalopod skin.

As part of the Bio-Inspired Materials and Systems session at SPIE Optics + Photonics 2017, an invited paper on dynamic materials inspired by cephalopods was presented by Rylan Kautz, highlighting the work of the Gorodetsky Group for Biomolecular Electronics at University of California, Irvine. Led by Alon Gorodetsky, associate professor of chemical engineering and materials science, the group is developing infrared camouflage and conductive materials inspired by cephalopods (squid, octopuses, and cuttlefish).

Over the last century, cephalopods have been essential in neurobiological and neuroscientific studies. In 1952, the Nobel-prize winning work of Alan Hodgkin and Andrew Huxley used the giant squid axon to uncover the ionic mechanism of action potentials. This work provided an overall understanding of neural signaling, neuronal processes, and how they function. As a comparative model organism, Kautz noted, "cephalopods have the most advanced central nervous system of all invertebrates."

Gorodetsky's lab group is exploring the properties of structural proteins known as reflectins, which play crucial roles in the functionality of cephalopod skin. This protein underpins some of the color-changing functionality of cephalopod skin cells like chromatophores and iridophores, which are part of a complex skin structure that allows the animals to camouflage themselves.

The lab is mainly working with one isoform of reflectin, known as reflectin A1, but Kautz pointed out that "every year more isoforms of this unusual protein are being discovered and more is being understood about its function." 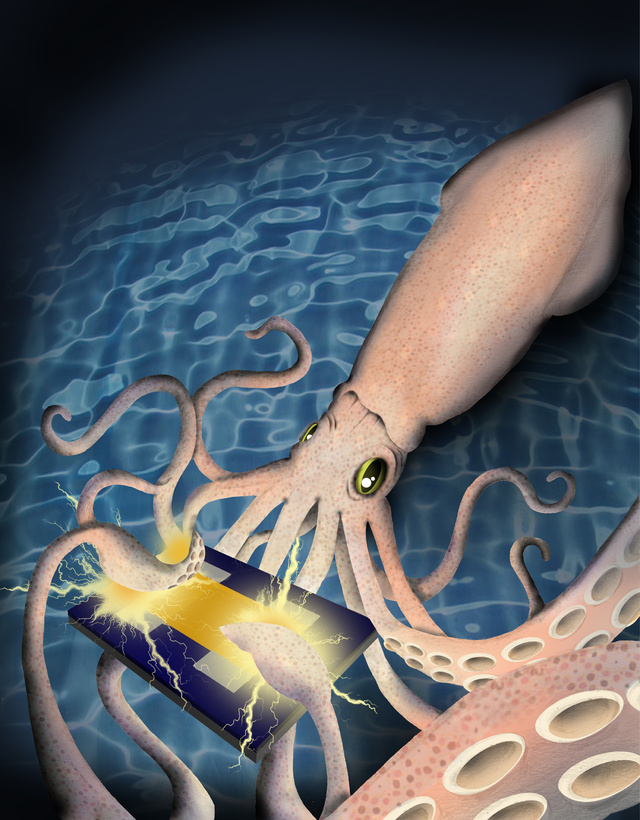 Bioelectronics were noted as a potential "cure-all strategy for disease treatment" in this presentation. Clinicians and molecular biologists identify "targets" of disease or health, neuroscientists identify the neural pathway to manipulate the target, then engineers and computer scientists design a device to modulate the appropriate pathway.

For example, neural interfaces can enable control of external devices such as wheelchairs, the cursor on a computer screen, or prosthetic devices. While neural interfaces can be fabricated from inorganic -- such as tungsten, platinum, or gold -- "biocompatibility is a major issue." Therefore, organic/biological materials, like carbon nanotubes, graphene/poly(N,N-dimethylacrylamide), and polypyrrole/chitosan, have several advantages -- they require simple, convenient, and inexpensive processing and fabrication, are amenable to chemical modification, possess mechanical properties inherently compatible to biological systems, and are well suited for the transduction of biochemical events into electronic signals.

The ultimate goal of this work is to develop a reflectin-based protonic device that may be able to communicate with cells in living tissue through proton channels and pumps that could interface in a brain-machine type interface. These findings hold implications for the development of adaptive camouflage systems, sensitive bioelectronic platforms, and renewable energy technologies.