Metamaterials—nanoengineered structures designed for precise control and manipulation of electromagnetic waves—have enabled such innovations as invisibility cloaks and super-resolution microscopes. Using transformation optics, these novel devices operate by manipulating light propagation in "optical spacetime," which may be different from the actual physical spacetime. According to Igor Smolyaninov of the University of Maryland, "One of the more unusual applications of metamaterials was a theoretical proposal to construct a physical system that would exhibit two-time physics behavior on small scales." That proposal was recently realized experimentally by demonstration of two-time (2T) behavior in ferro-fluid-based hyperbolic metamaterials by Smolyaninov and a team of researchers from Towson University, led by Vera Smolyaninova. The observed 2T behavior has potential for use in ultrafast all-optical hypercomputing.

The familiar three spatial dimensions and one temporal dimension of conventional spacetime find an alternative paradigm in 2T physics, which has two spatial and two temporal dimensions. Pioneered through theoretical investigation and modeling by physicists Paul Dirac and Andrei Sakharov in the 1960s, 2T space-time was more recently explored by Smolyaninov with Evgenii Narimanov of Purdue University. Their theoretical model predicted that light waves might exhibit 2T behavior in hyperbolic metamaterials.

Hyperbolic metamaterials are extremely anisotropic, behaving like a metal in one direction and like a dielectric in the orthogonal direction. Originally introduced to improve optical imaging, hyperbolic metamaterials demonstrate a number of novel phenomena, such as very low reflectivity, extreme thermal conductivity, high temperature superconductivity, and interesting gravity theory analogues.

Smolyaninov explains that the gravity analogues are a coincidental mathematical parallel: the mathematical equations that describe propagation of light in hyperbolic metamaterials also describe particle propagation in the physical, or Minkowski, spacetime in which one of the spatial coordinates behaves as a "time-like variable." Smolyaninov explains further that nonlinear optical effects "bend" this flat Minkowski spacetime, resulting in "effective gravitational force between extraordinary photons." According to Smolyaninov, experimental observation of the effective gravity in such a system should enable observation of the emergence of the gravitational arrow of time along a spatial direction. Together with conventional physical time, the two time-like variables guide evolution of the light field in a hyperbolic metamaterial.

Experimental progress in this exciting field has been relatively slow until recently, due to difficulties associated with the 3D nanofabrication techniques necessary to produce large-volume 3D nonlinear hyperbolic metamaterials. The research team developed an alternative way to fabricate large-volume 3D nonlinear hyperbolic metamaterials using self-assembly of magnetic metallic nanoparticles in a ferrofluid subjected to external magnetic field. Smolyaninov explains, "Due to nonlinear optical Kerr effect in the strong optical field of a CO2 laser, light propagating inside the ferrofluid indeed exhibits pronounced gravity-like effects, leading to emergence of the gravitational arrow of time."

As predicted by the earlier theoretical work, the experimentally observed dynamics of self-focused light filaments may indeed be described mathematically using the 2T physics model. 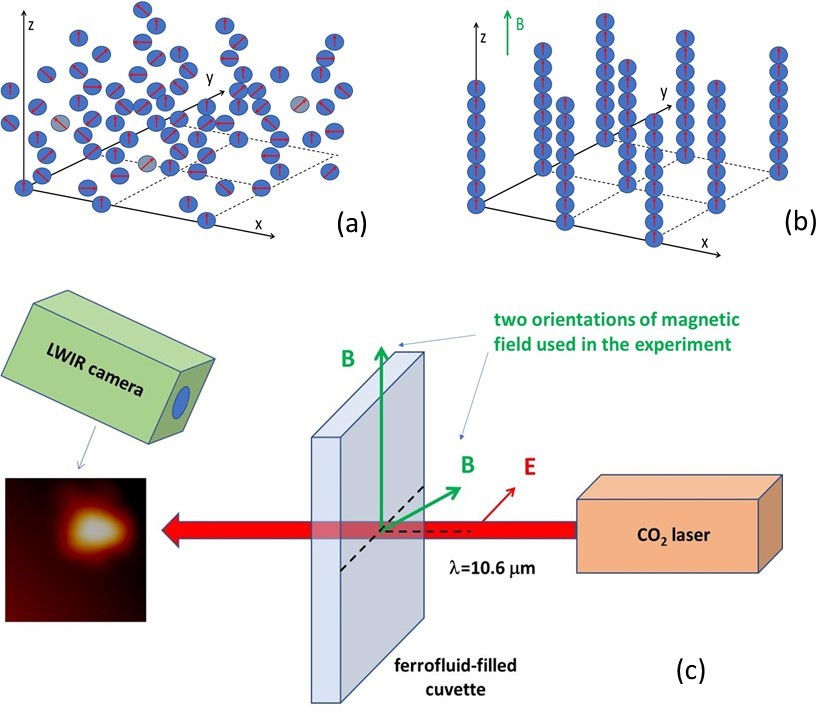 Experimental study of two-time physics in self-assembled hyperbolic metamaterials: (a) In the absence of external magnetic field, cobalt nanoparticles are randomly distributed within the ferrofluid, and their magnetic moments (which are shown by the red arrows) have no preferred spatial orientation. (b) Application of external magnetic field leads to formation of nanocolumns (made of nanoparticles) which are aligned along the field direction. Propagation of light in such a metamaterial is mathematically described by two time-like variables. (c) Schematic diagram of the experimental geometry. A thermal camera is used to study CO2 laser beam propagation through the ferrofluid subjected to external DC magnetic field. The inset shows the measured beam shape in the absence of the ferrofluid sample. Two orientations of the external magnetic field B used in our experiments are shown by green arrows. The red arrow shows laser light polarization.

According to Smolyaninov, ultrafast all-optical hypercomputing involves mapping a computation performed during a given period of time onto a much faster computation performed using a given spatial volume of a hyperbolic metamaterial—a possibility enabled by the observed 2T behavior. Smolyaninov notes that hypercomputing schemes may be useful in time-sensitive applications, such as real-time computing, flight control, or target recognition.