Optical metasurfaces made from all-dielectric building blocks have been established as a versatile way to implement various optical functionalities, including lenses, holograms, and vortex-beam generators. In a recent breakthrough, researchers demonstrated a metasurface enabling three-dimensional imaging with only a single camera.

The researchers use the so-called Huygens' metasurfaces to implement such a phase mask. Huygens' metasurfaces consist of periodically arranged resonant nanoparticles that have equal resonance strength and fundamental electric and magnetic resonances that coincide spectrally. Having a very high transmission, these metasurfaces also allow control of the transmitted light phase by slightly changing the geometry of the nanoparticles. Using metasurfaces consisting of silicon nanocylinders, the researchers realize a phase coverage from 0 to 2π of the transmitted light by changing the radius of the cylinders and the period of the periodic arrangement. The phase mask is implemented by realizing a pixelated metasurface where the structural geometry of the different pixels is chosen to achieve a specific phase shift to realize a rotating point-spread function.

Experimental characterization of the point-spread function of a simple imaging system containing the realized phase mask shows that object distances within a span of 20 cm centered at 65 cm object distance can be discriminated. This is achieved by determining the inclination of the rotating maxima with respect to the horizontal direction. 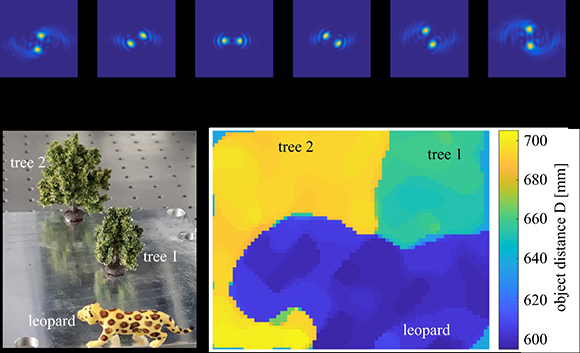 Furthermore, the authors show that 3D imaging can be realized with a single camera using the metasurface phase mask. They image a scene containing several objects within the distance range resolvable by the engineered point-spread function. The captured raw image using such point-spread function contains two copies of each image point, due to the two maxima of the point-spread function. These are shifted relative to each other depending on the distance of the respective object point. Using a numerical reconstruction algorithm that locally analyzes the image cepstrum, the researchers were able to retrieve both the distance of each object point and a 2D intensity map.

Thus, they show that 3D imaging using metasurfaces is possible, which is a significant step toward incorporating increasingly complex functionalities into ultrathin nanostructured surfaces.

For more context and discussion of this exciting research, see the commentary by Lei Xu and Mohsen Rahmani.