The ability of biomedical optics technologies to make an impact in places where resources are limited continues to improve, not least thanks to the research themes highlighted in the sixth Optics and Biophotonics in Low-Resource Settings conference at SPIE Photonics West 2020 in February.

Reduced cost and robust instrumentation are the constant driving forces, along with designs intended to make devices more portable, suitable for use in locations that may be a long way from the nearest hospital.

The availability of cell phones and the relatively sophisticated optics they now contain has been another factor. Research by groups such as the one led by Aydogan Ozcan at UCLA has shown how cell phones can form the core of handheld devices able to examine samples of blood cells and tissue, potentially allowing diagnosis of disease to be made on the spot.

David Levitz, co-chair of the BIOS conference alongside Ozcan, is co-founder of MobileODT, an Israeli developer of hand-held platforms for colposcopy procedures. The company's goal is to allow any health provider to carry out meaningful examinations of a patient's cervix, and help tackle the high levels of cervical cancer found worldwide.

From Levitz's perspective, the deployment of artificial intelligence algorithms able to carry out efficient analysis of the image data is now the route to wider use of such devices.

"MobileODT was founded in 2012 to build small visual diagnostic tools, empowering lesstrained providers and increasing the reach of health systems," said Levitz. "Our product, the Enhanced Visual Assessment (EVA) System, is an FDA-cleared internet-connected mobile colposcope for examination of the cervix." 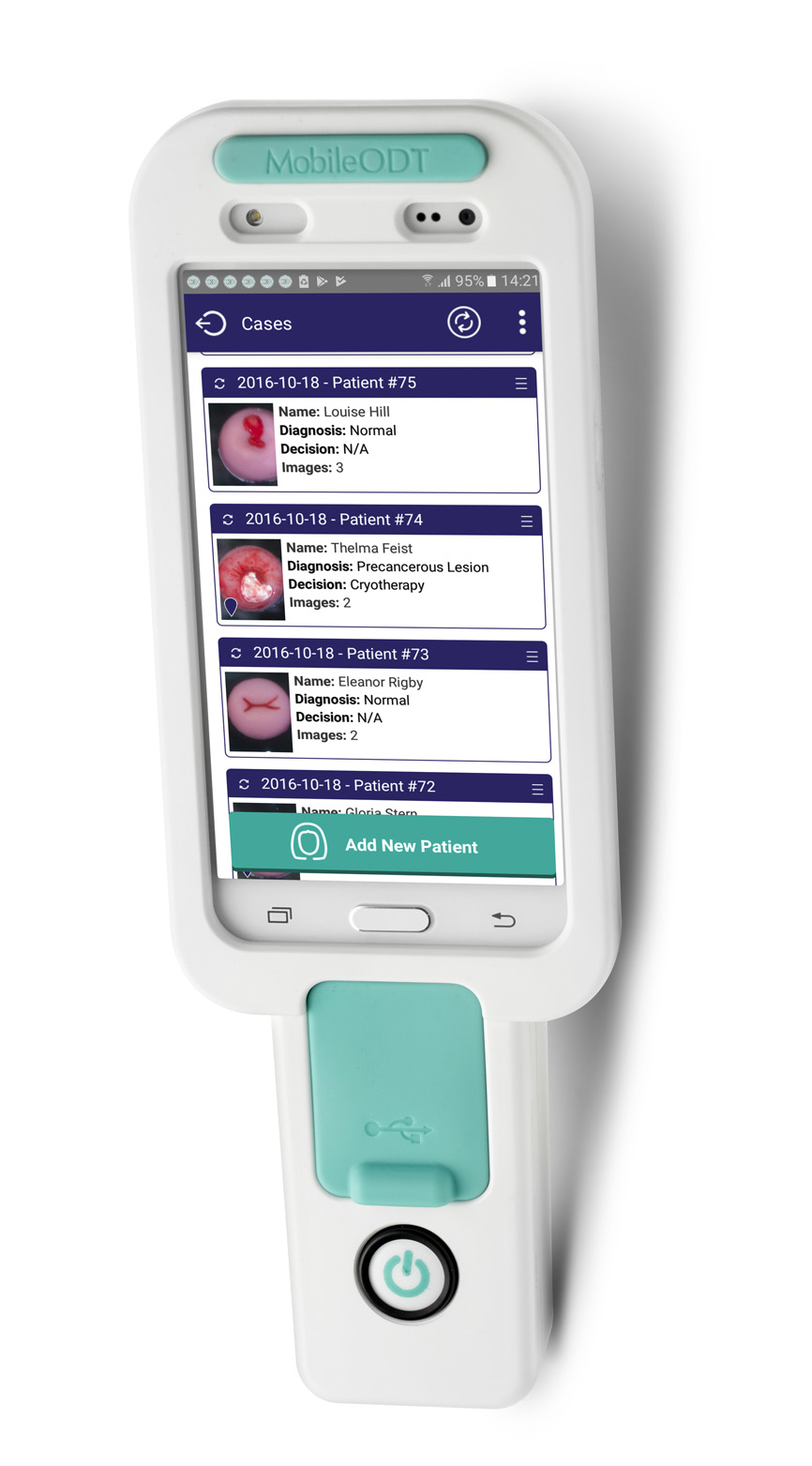 The system includes the EVA 3 Plus colposcope itself, a hand-held module built around a Samsung Galaxy J5 Pro cell phone with its Android operating system, and incorporating an added high-magnification lens to boost the handset's on-board optics. Images of the cervix are viewed directly on the embedded phone's HD-resolution screen, while a bespoke app and web portal from MobileODT allows patient data to be stored or accessed by other healthcare professionals as required.

Now available in several territories, the MobileODT platform indicates the potential impact that can still be made by relatively traditional microscopy and optical hardware in sectors such as healthcare, according to David Levitz, even while it is discussed alongside the more technologically groundbreaking research highlighted at SPIE Photonics West.

"We investigated the use of more optically advanced technologies, such as scattering absorption, to carry out tissue assessments of the cervix, but it proved too difficult to achieve commercially," he commented. "The challenges involved in commercializing a spectral energy device are, of course, immense. But I am very optimistic about ‘old school' optics having an impact, and allowing us to take technologies that work in the developed world and make them available elsewhere at lower cost."

The next leap forward that Levitz foresees is in the incorporation of artificial intelligence capability and dedicated image analysis algorithms, able to receive the images of a cervix from the colposcope and determine whether evidence of cervical cancer is present.

This process is now underway, with MobileODT developing its own AI component, termed an Automated Visual Evaluation (AVE) algorithm, as part of an image analysis platform called Visual Pap. In trials, AVE has proven more reliable than a human in identifying abnormal tissue that might indicate a pre-cancerous condition, according to the company.

In MobileODT's view, its algorithms have the potential to transform cervical diagnosis, especially in low-resource settings. "Visual Pap will reduce the marginal cost of each test, and enable clinicians receiving the screening result on EVA to immediately conduct a colposcopy or refer to a remote gynecologist," Levitz said.

The potential appeal of the AI approach is clear, but as MobileODT brings the technology to more markets it will inevitably meet both commercial and institutional challenges. 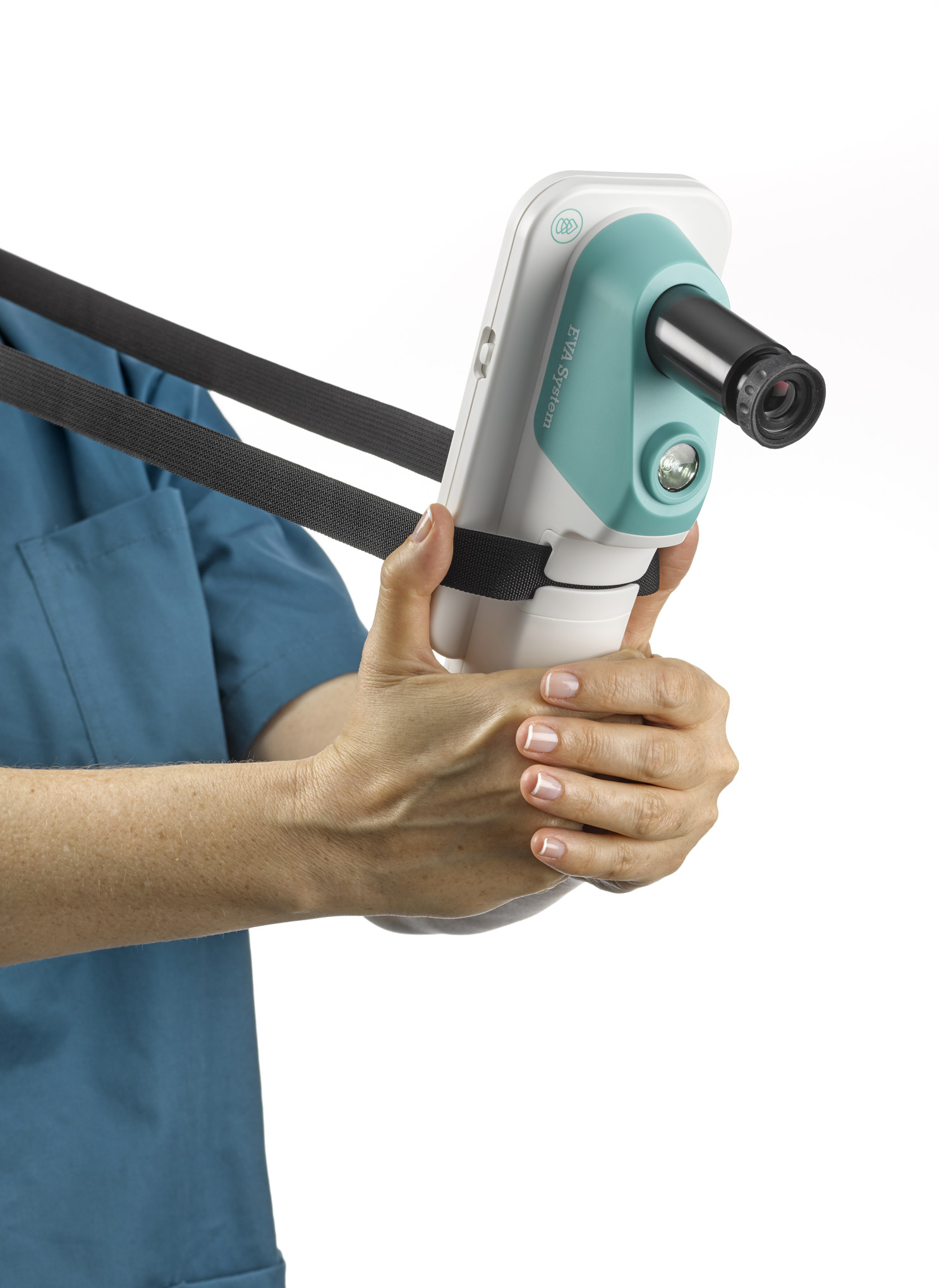 The EVA system is lightweight and portable.

One immediate factor is the regular release of updated or redesigned models from the cell phone companies, often on an annual basis. Each tweak potentially impacts the ability of external optical modules to function properly, as well as presenting fresh regulatory hurdles to be negotiated.

Another is the attitude of the doctors and clinicians in the field, since the way that doctors think about AI and how that thinking evolves will be a major driver behind its adoption, according to Levitz.

"It will take time for clinicians to get used to the idea of pressing a button and receiving a diagnosis, accustomed as they naturally are to Pap smears and biopsies, and to a certain time delay," he commented. "We carried out a six-month clinical trial in Korea involving ten users, some of the first commercial users of AI for this application, and after the trial concluded half of those users carried on using the product-but equally, half did not."

Acceptance by patients and their peace of mind receiving a cervical examination through a new instrument based around a cell phone, and potentially receiving a diagnosis on the spot, is another factor.

Cultural and financial differences between regional healthcare systems will also play a part, as with any new biomedical technology. MobileODT has initially targeted its AI platform at Korea, Poland, and India, with an emphasis on low-resource settings in those territories. But the three regions have distinct healthcare landscapes, according to Levitz, who notes that the India market is particularly price sensitive compared to Korea, with Poland presenting a different picture again.

"Our wish list for the future impact of this technology inevitably revolves around money," Levitz commented. "We are effectively a company moving from hardware to the incorporation of bespoke software, and which could be in clinics very shortly-perhaps not the norm for biophotonics developers or for companies at Photonics West. We are also currently working with our AI platform in markets outside the US, and ultimately few medical advances make their fullest impact without addressing the US market. All of this can put us somewhat outside or investors' comfort zones."

But Levitz is confident that the adoption of AI is the biggest change coming in healthcare over the next few years, a process that will not be stopped once it commences.

"AI is going to become increasingly common in almost every aspect of medicine," said Levitz. "We are going to see a lot more microscopes where the optics are combined with an AI function, and people are going to be developing their own lowcost hardware and adding AI to it."

Tim Hayes is a freelance writer based in the UK. He was previously industry editor of optics.org and Optics & Laser Europe magazine. A version of this article appeared in the 2020 Photonics West Show Daily.

The Future of Medical Imaging Intelligence Isn't All Artificial