Among the various parameters in photography, the sequential imaging of microscopic ultrafast dynamic processes requires high frame rates and high spatial and temporal resolutions. In current imaging systems, these characteristics are in a tradeoff with one another.

However, scientists at Shenzhen University, China, have recently developed an all-optical ultrafast imaging system with high spatial and temporal resolutions, as well as a high frame rate. Because the method is all-optical, it's free from the bottlenecks that arise from scanning with mechanical and electronic components.

Their design focuses on non-collinear optical parametric amplifiers (OPAs). An OPA is a crystal that, when simultaneously irradiated with a desired signal light beam and a higher-frequency pump light beam, amplifies the signal beam and produces another light beam known as an idler. Because the crystal used in this study is non-collinear, the idler is fired in a different direction from that of the signal beam. But how is such a device useful in a high-speed imaging system?

The answer lies in cascading OPAs. The information of the target, contained in the signal beam, is mapped onto the idler beam by the OPA while the pump beam is active. Because the idler moves in a different direction, it can be captured using a conventional charge-coupled device (CCD) camera "set to the side" while the signal beam moves toward the next stage in the OPA cascade.

Just like how water would descend in a waterfall, the signal beam reaches the subsequent OPA, and the pump beam generated from the same laser source activates it; except now, a delay line makes the pump beam arrive later, causing the CCD camera next to the OPA in the second stage to take a picture later. Through a cascade of four OPAs with four associated CCD cameras and four different delay lines for the pump laser, the scientists created a system that can take four pictures in extremely quick succession. 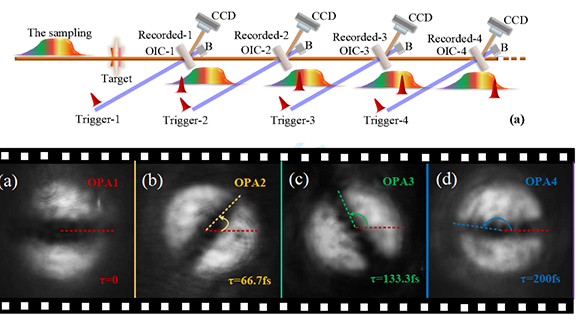 (Top). Basic schematic of the proposed imaging system. The sampling pulse hits the target and goes through four optical image converters (OIC), which are the non-collinear optical parametric amplifiers (OPA). The idler signals (labelled as "Recorded") appear when the pump laser pulses (labelled as "Trigger") hits the OPAs. Introducing a delay between these trigger pulses allows for taking images in quick succession by capturing the idler signals using conventional CCD cameras. (Bottom) Four sequential images of a rotating optical field spinning at 10 trillion radians per second.

The speed of capturing consecutive pictures is limited by how small the difference between two laser delay lines can be. In this regard, this system achieved an effective frame rate of 15 trillion frames per second - a record shutter speed for high-spatial-resolution cameras. Conversely, the temporal resolution depends on the duration of the laser pulses triggering the OPAs and generating the idler signals. In this case, the pulse width was 50 fs (fifty millionths of a nanosecond). Coupled with the incredibly fast frame rate, this method is able to observe ultrafast physical phenomena, such as an air plasma grating and a rotating optical field spinning at 10 trillion radians per second.

According to Anatoly Zayats, Co-Editor-in-Chief of Advanced Photonics, "The team at Shenzhen University has demonstrated ultrafast photographic imaging with the record fastest shutter speed. This research opens up new opportunities for studies of ultrafast processes in various fields."

This imaging method has scope for improvement but could easily become a new microscopy technique. Future research will unlock the potential of this approach to give us a clearer picture of ultrafast transient phenomena. 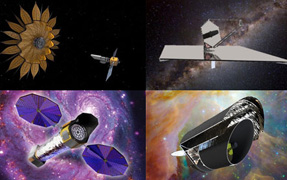