In quantum imaging techniques, entangled photons are used to overcome the limits of classical-light apparatus, in terms of image quality (beating the standard shot-noise limit) and resolution (exceeding the Abbe diffraction limit).1–3 In modern quantum imaging experiments, however, the spatial properties of the entangled photons are recorded by means of complex and slow setups.4 That is, the systems either involve motorized scanning of single-pixel single-photon detectors—such as photomultiplier tubes (PMTs) or silicon photomultipliers (SiPMs)—or the use of low-frame-rate-intensified CCD cameras. To enable further developments of quantum imaging techniques, simpler entangled-photon detection systems (with faster acquistion times) are thus required.

Arrays of single-photon avalanche diodes (SPADs) implemented in standard CMOS technology are a relatively recent development in the field of single-photon detection. This technology provides a timing performance similar to that of PMTs and SiPMs at a high spatial resolution.5 To date, CMOS SPAD technology has found applications in biology (for fluorescence lifetime imaging microscopy6 and Raman spectroscopy7), in medicine (for positron emission tomography8), in the automotive and space industries (for 3D time-of-flight measurements9–11), as well as in cryptography (for quantum random number generation12). In addition, CMOS SPAD consumer products have recently become commercially available as light detection and ranging devices (for smartphone camera autofocusing).13

In our work,14 we are also looking to develop a new generation of optical microscope systems (by exploiting the properties of entangled photons to acquire images at a resolution beyond the classical Rayleigh limit). As part of our All Solid-State Super-Twinning Photon Microscope (SUPERTWIN) project,15 we have thus evaluated the technology for quantum imaging experiments. In the context of our study, the requirements for the single-photon detector include high spatial resolution, high sensitivity in the visible wavelength range (up to the near-IR region), sub-100ps temporal resolution, low dark count rates, negligible crosstalk, and good usability.

So far we have conducted a preliminary study in which we used a SPAD-based imager to acquire second-order correlation patterns in the far field of a flux of entangled photons (see Figure 1). The sensor we chose for the experiment—known as SPADnet-I—is an 8 × 16 time-resolved imager that is specifically designed for positron emission tomography applications.8 Nevertheless, the SPADnet-I detector also exhibits several characteristics that make it suitable for our quantum optics experiments. These properties include a high pixel-fill factor (42.6%), a per-pixel photon time-stamping capability (with 65ps resolution), 265ps jitter, a high frame rate (up to 750kfps), and the capability of turning the SPADs on/off individually (i.e., to calibrate the sensor and increase the signal-to-noise ratio by enabling only low-noise devices). 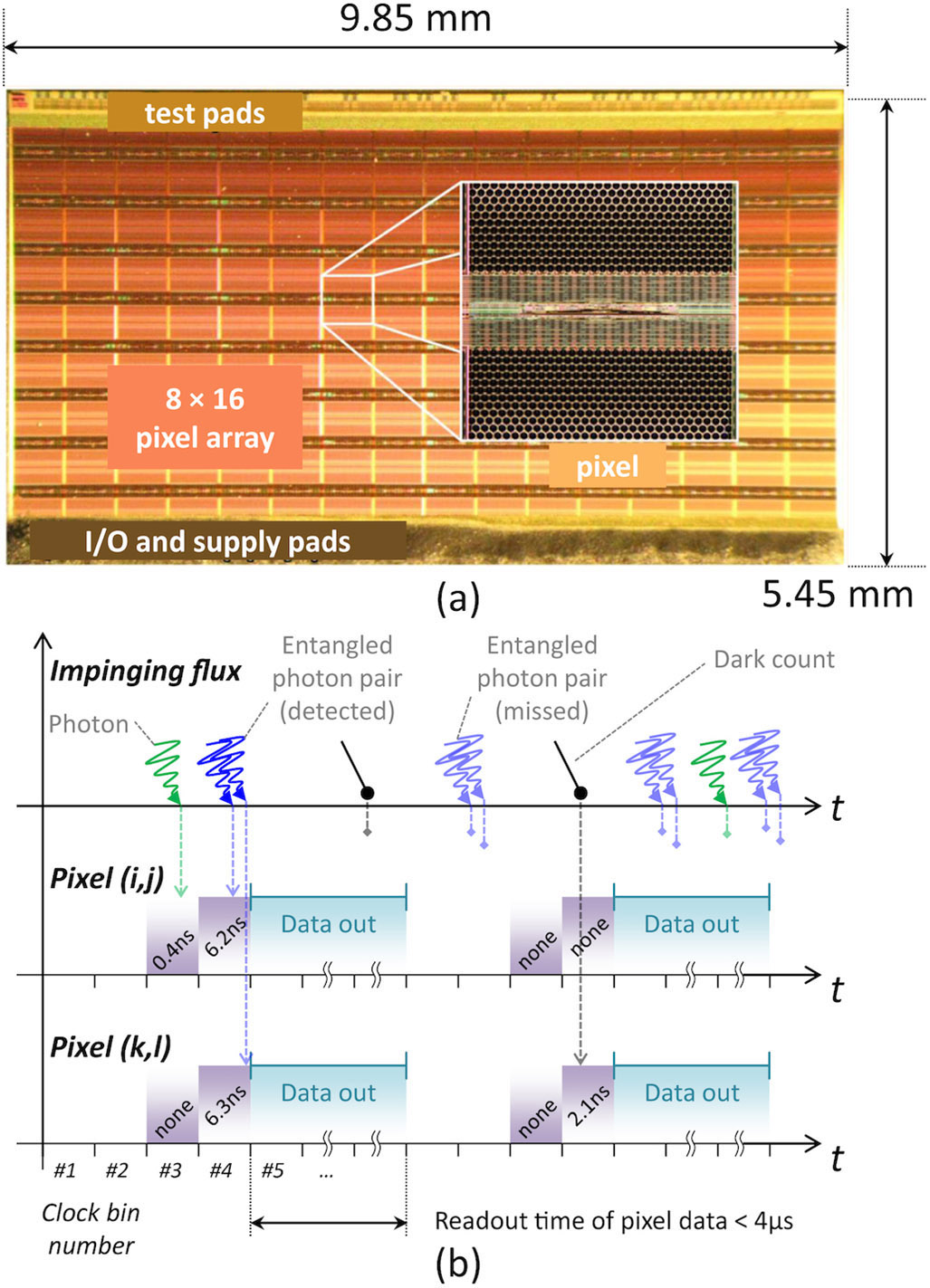 Figure 1. (a) Micrograph of the SPADnet-I chip (SPAD: single-photon avalanche diode). Inset shows a close-up on a single pixel of the chip, which includes 720 SPADs and (in the middle) the electronics required for calibration, SPAD operation, photon counting, and photon time-stampling. I/O: Input/output. (b) Illustration of the SPADnet-I acquisition timing during a quantum physics experiment. The chip records a timestamp per pixel in two consecutive clock bins. The data is then read out in less than 4μs, with the clock running at a frequency of 100MHz. The scheme is shown here for two separate pixels, i.e., (i,j) and (k,l). t: Time.

In the optical setup for our experiments (see Figure 2) we used a non-linear crystal (pumped with a continuous-wave laser) to generate transverse-momentum-entangled photon pairs, by means of spontaneous parametric down-conversion. Under certain conditions, we expect the photons to exit the crystal at a known angle (with respect to the longitudinal axis). The beam was then focused, filtered, and split into two beams that were subsequently fed to the photodection stage. In typical quantum imaging approaches, this process involves the use of two PMTs or SiPMs and a 2D image is generated by way of time-consuming mechanical detector scanning. In contrast, with our technique, the SPADnet-I chip replaces the single-channel single-photon detectors and obviates the need for a scanning mechanism.

There are, however, some outstanding problems with the use of the SPADnet-I chip in a quantum optics testbed. For instance, it has a limited spatial resolution and a high pixel dark count rate. We have therefore recently designed a new imager and submitted it for fabrication in a fully standard 150nm CMOS process. Our new chip includes three different architectures that are specially designed to target the SUPERTWIN specifications. The first of these architectures is based on area-efficient time-to-digital converters (TDCs), i.e., which represent a robust solution for recording photon arrival times. Our second architecture is based on the TDC analog counterpart, known as a time-to-analog converter. Such devices typically lead to more compact and energy-efficient solutions, but at the expense of larger mismatches across the array. For both these architectures we have implemented a data compression scheme to reduce the data rate and increase the frame rate. With our third (timestampless) architecture, we aim to monitor the global photon activity and to freeze the SPAD status if several photons are detected simultaneously. The main benefit of this approach is the smaller amount of data that is thus transmitted. All three of our architectures have a pixel pitch of less than 50μm, which enables the implementation of 256 × 256-pixel-resolution imagers. In addition, according to our design, a >20% full frame is obtained with all the architectures.

In summary, as part of the SUPERTWIN project, we have conducted a preliminary study to demonstrate the use of a SPAD-based imager to measure the first- and second-order correlation functions of entangled photons. Although our results demonstrate the applicability of our approach for improved quantum imaging (i.e., without the need for a scanning mechanism), we have also recently designed a new imager that will enable higher spatial resolution measurements and lower dark count rates. In the next stages of our work, we plan to fully characterize the three architectures of our new detector design (in terms of their electro-optical properties) and to evaluate the detector's performance in a real quantum physics scenario.

We are grateful for the support of the European Commission through the Horizon 2020 SUPERTWIN project (686731).

Leonardo Gasparini obtained his PhD in information and communication technologies from the University of Trento, Italy. As a researcher at FBK, he is involved in the design and characterization of integrated optical sensors that are fabricated through deep-submicrometer CMOS technology and are mostly aimed at single-photon applications. 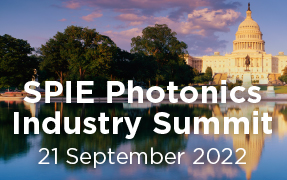