The chemical composition of planets and other solar system bodies provides information about their origins and evolution. Small bodies (e.g., asteroids, comets, and the moons of Mars) preserve a record of the early solar system. Indeed, the two largest bodies in the main asteroid belt—Ceres and Vesta—are thought to be surviving members of a population of planetary ‘embryos,’ from which the planets originally grew.1 These two asteroids are chemically distinct and have followed very different evolutionary paths. Vesta formed under hot conditions and consists of magmatic materials that cooled to form a layered interior (i.e., a core, mantle, and crust). Ceres, however, is a water-rich body that probably formed later—or further away from the Sun—than Vesta. Smaller asteroids may contain a mixture of materials from different parent bodies.2 Since some of these smaller asteroids are relatively easy to access (e.g., the near-Earth asteroids), they may be potential targets for mining and exploration.3 Some are potentially hazardous objects.4 A thorough understanding of their physical and chemical properties, as well as their interior structure, is required for planetary defense.5

Nuclear spectroscopy is commonly used to determine the elemental composition of the surface of planets, asteroids, and comets.6 Gamma rays and neutrons are produced by the interaction of galactic cosmic rays with the surface materials on small airless bodies and planets with thin atmospheres, such as Mars (see Figure 1). Gamma rays produced via interactions with major rock-forming elements (e.g., iron, silicon, magnesium, and aluminum) provide crucial information for geochemical studies. For planets that have thick atmospheres (e.g., Venus) the flux of cosmogenic gamma rays near the surface is relatively low. All natural solar system materials, however, contain long-lived radioelements (e.g., potassium, thorium, and uranium) that are an additional source of characteristic gamma rays. The potassium/thorium ratio of surface materials is a diagnostic measure of a body's bulk composition and can provide information about where and when the planet or asteroid formed. In planetary nuclear spectroscopy experiments, the emitted gamma rays and neutrons are measured by a spectrometer that is deployed either on the surface (i.e., on a rover or lander) or in a close-proximity orbit within about one body radius of its surface. Long accumulation times (months) are normally required to achieve measurements with the precision required to map elemental surface compositions from orbit. A number of missions to the Moon, Mars, Mercury, and the asteroid 4 Vesta have been used to successfully obtain elemental mapping data (see Figure 2).7,8,9,10,11,12,13 In situ surface measurements have also been made for Venus, the asteroid Eros, and Mars.14,15,16 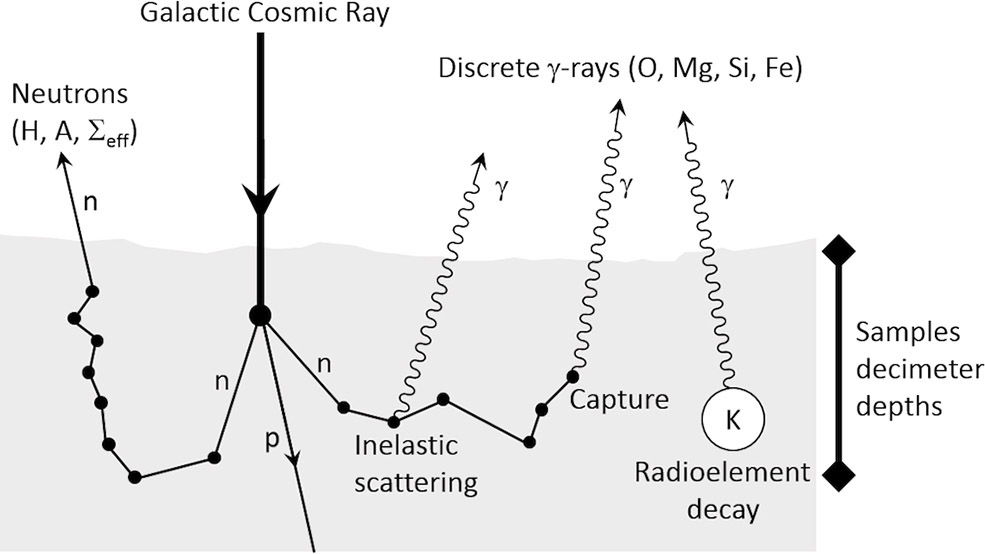 Figure 1. Cartoon of gamma-ray production processes in the surface of planetary bodies. Galactic cosmic rays—mainly high-energy protons (p)—smash apart atoms in the top surface of airless bodies. This produces a shower of secondary particles, which include neutrons (n). These neutrons then undergo successive collisions with atoms in the surface and produce gamma rays (γ) via inelastic scattering and radiative capture. Gamma rays can also be produced by the decay of natural radioelements, such as potassium (K), thorium (Th), and uranium (U). The spectrum of the gamma rays (see Figure 2) can be analyzed to determine the concentration of the detected elements. Important rock-forming elements include oxygen (O), magnesium (Mg), silicon (Si) and iron (Fe). In addition, the escaping neutrons convey information about the hydrogen content (H), average atomic mass (A), and the neutron macroscopic capture cross section (Σe#) of the surface materials. 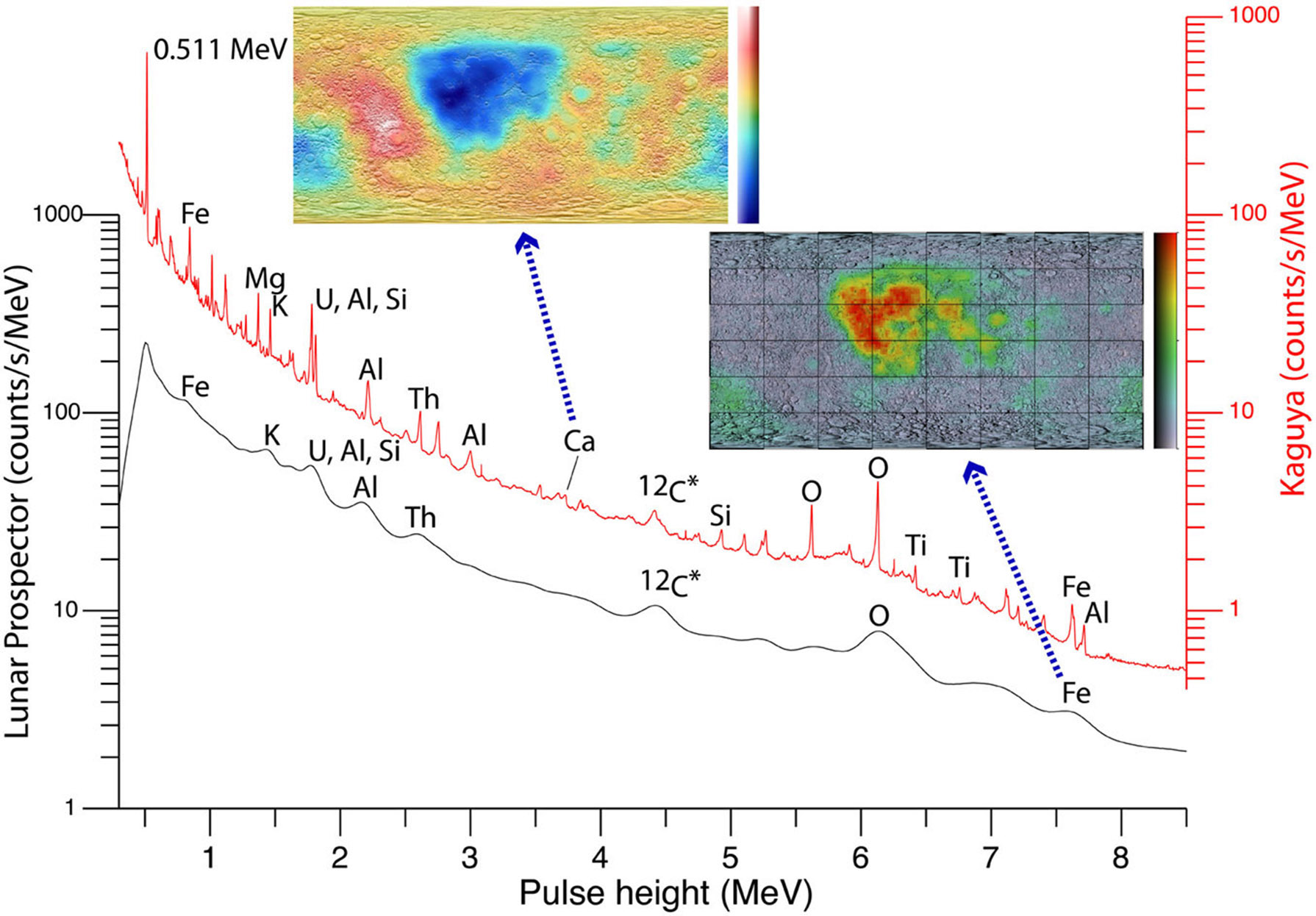 Figure 2. Comparison of the average lunar gamma-ray spectrum, as acquired during the Lunar Prospector (black) and Kaguya (red) missions. Bismuth germanate (BGO) was used for the detector in the Lunar Prospector instrument, whereas high-purity germanium (HPGe) was used for the Kaguya spectrometer. Prominent gamma-ray peaks in the spectra indicate the presence of various elements in the target. These include aluminum (Al), calcium (Ca), and titanium (Ti). The two insets show global maps of iron oxide (right) and calcium oxide (left) created from Lunar Prospector and Kaguya data, respectively.7,8These maps show concentration ranges of 8–20wt% for calcium oxide and 2–25wt% for iron oxide. The peak labeled 12C* is made by neutron reactions with oxygen or carbon.

In this work we examine and review the fundamentals and requirements of planetary nuclear spectroscopy techniques. We evaluate the latest detector technologies available for these applications, as well as their associated challenges. The possibilities for future developments in this field (e.g., as presented by new scintillator materials) are considered.17

Planetary nuclear spectroscopy applications require that instruments have high gamma-ray detection efficiencies, as well as energy resolutions that are sufficient to distinguish contributions from different elements. The requirement for high efficiency emphasizes the need for large-volume detectors, scintillators, and semiconductors that have relatively high atomic numbers and densities. Cosmogenic and radiogenic gamma-ray emissions from planetary surfaces are relatively weak. Therefore, detectors must have low self-activity levels. For example, gamma rays produced from the decay of radio-lanthanum in the scintillator lanthanum bromide (LaBr3) can obscure gamma-ray emissions from the Moon.9 In addition, the harsh radiation conditions of space mean materials that are insensitive to radiation damage, or for which the damage can be mitigated (e.g., via annealing), are preferable. Spaceflight applications also require simple, low-power, compact, and rugged electronics.

Flight-heritage gamma-ray spectrometers have included various low-resolution scintillators for detection, e.g., bismuth germanate that was flown on the Lunar Prospector and Dawn missions.6,7,13 High-purity germanium (HPGe)—a semiconductor—was used in the gamma-ray spectrometers that were flown on the Kaguya, Mars Odyssey, and MESSENGER missions.6,8,12,17 The scintillator materials have the advantage of being relatively inexpensive. They can also be deployed at ambient temperatures, although this is at the cost of reduced sensitivity for some elements. HPGe, however, can be used to achieve very high spectral resolutions and therefore provide high levels of elemental sensitivity. This benefit, however, does come with the expense of added complexity, cost, and bulk, which are associated with the necessary cryogenic cooling. Although HPGe is seen as the ‘gold standard’ for gamma-ray spectroscopy detectors, we highlight that high resolution does not always guarantee optimal instrument performance. Additional performance-limiting factors include the mission concept of operations, design measures to mitigate backgrounds, and the deployment of the instrument on the spacecraft.

We believe it may be possible to overcome the resolution limitations of scintillator materials with the use of recently discovered ultra-bright scintillator materials, such as europium-doped strontium iodide.18,19 Strontium iodide (SrI2) has a high atomic number (48) and density (4.6g/cm3), and is thus an excellent candidate for gamma-ray spectroscopy applications. With SrI2 it is possible to achieve very high spectral resolutions (for a scintillator) of about 3% full width at half-maximum, at 662keV. This is sufficient to resolve key gamma-ray peaks in planetary spectra (see Figure 3). In addition, the relevant growth processes can be scaled up to produce large single crystals of this material. A two-inch diameter right-circular cylinder is suitable for planetary applications, and is within the capabilities of current crystal growth technology. Furthermore, the light output from SrI2 is well-matched to silicon photomultipliers (SPMs). SPMs are compact and do not require high voltages (unlike their bulky vacuum tube counterparts). The low cost, high-energy resolution, solid-state readout, and absence of self-activity characteristics, as well as the size scalability of SrI2, make this material a good choice for planetary gamma-ray instruments, i.e., compared with other bright scintillators (such as cerium bromide and LaBr3). 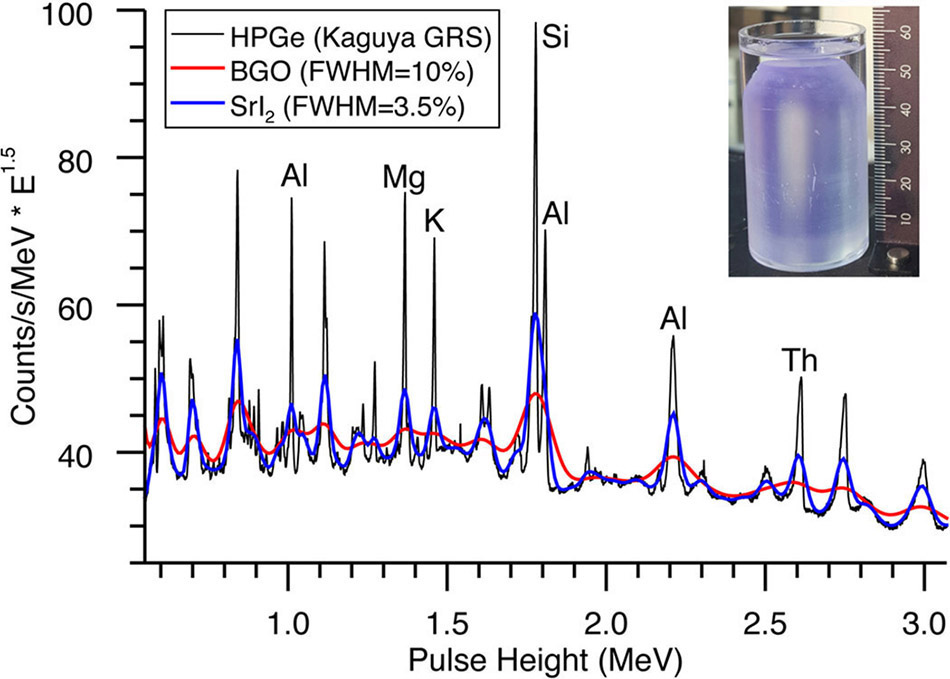 Figure 3. Illustration showing how energy resolution affects the ability to extract chemical information from a lunar gamma-ray spectrum. The whole-Moon spectrum acquired by the Kaguya gamma-ray spectrometer (GRS), which was equipped with a HPGe detector, is shown here. For comparison, it has been degraded to model the performance of BGO and strontium iodide (SrI2) scintillators. The superior resolution of SrI2 enables key gamma-ray peaks to be separated (e.g., for Mg and K). A photograph of a SrI2crystal that is a suitable size for planetary applications is shown in the inset. The measured energy resolution of this crystal was 3.5% full width at half-maximum (FWHM), at 662keV (with a photomultiplier tube). E: Energy.

Nuclear spectroscopy techniques, such as gamma-ray and neutron spectroscopy, are commonly used to determine the chemical composition of solar system bodies. We have examined the requirements for planetary gamma-ray detectors and propose that recently discovered europium-doped strontium iodide is a good option for a scintillator-type detector. We still require, however, extensive testing of this material to demonstrate that SrI2-based instruments can withstand the rigors of spaceflight. In addition, assessments of radiation-induced backgrounds in the material, as well as its susceptibility to radiation damage, still need to be conducted. If this technology stands up to these tests, it will provide a powerful new tool for geochemical investigations of planetary surfaces. It will be possible to deploy compact, low-power instruments on CubeSats, orbiters, atmospheric probes, landers, and rovers as part of future missions to planets, asteroids, and comets. SrI2 technology may also find uses on future manned missions, and their robotic precursors, to nearby asteroids.

This evaluation of the SrI2-based instrumentation was funded by the California Institute of Technology Jet Propulsion Laboratory. Mike Groza, Emmanuel Rowe, and Vladimir Buliga, from Fisk University, made significant technical contributions to this work (detector development and crystal growth). We are grateful to Bob Reedy for his insights on the history of planetary gamma-ray spectroscopy.

Tom Prettyman is a senior scientist at the PSI and an adjunct professor at the University of New Mexico's Institute of Meteoritics. He is a nuclear spectroscopist with planetary experience on the Lunar Prospector, Mars Odyssey, and Dawn missions. He is also the lead scientist for Dawn's gamma-ray and neutron spectrometer.

Naoyuki (Yuki) Yamashita is a nuclear spectroscopist who has worked on the Japan Aerospace Exploration Agency's Kaguya and NASA's Dawn missions. He has experience with instrument design, data reduction, analysis, and modeling.

Arnold Burger is the Samuel P. Massie Chair of Excellence, professor of physics, and the vice provost for academic initiatives. He is also a SPIE Fellow. His expertise is in crystal growth and radiation sensor development for national security, space, and medicine applications.

James Lambert is a senior systems engineer in the Analytical Instruments Group. He has 27 years of engineering experience designing optically based instruments for applications in planetary science, astronaut health, and for the private sector. He developed the Compact Integrated Raman Spectrometer and the JPL Venus Testbed.

Carol Raymond is a principal scientist with expertise in planetary geophysics. She manages the Small Bodies Program within the Solar System Exploration Directorate and is the deputy principal investigator of the Dawn mission.

Keivan Stassun is a professor of physics and astronomy. He also directs the Vanderbilt initiative in data-intensive astrophysics, which involves a collaboration with Fisk University for the development of materials and instruments for next-generation astronomy missions.