In spite of the extraordinary progress made in the past decades in the isolation, manipulation, and detection of individual quantum particles, a multi-element quantum computer is still a long-term goal. However, current trends in quantum technology may lead in the next few years to fully controllable quantum devices able to perform specific tasks that are inaccessible to systems operating classically. One task in particular is to reproduce, or simulate, the dynamics of specific quantum phenomena. As first envisaged by Feynman,1 nothing can beat a quantum system in simulating another quantum system. The task would overwhelm a classical system, which would need to store information about every possible combination of states in the target quantum system. A quantum simulator can store this information in a similar set of quantum states, which can be controlled in their preparation, evolution, and measurement.

Photonic technologies have a peculiar advantage over other approaches for realizing an efficient quantum simulator, in that photons behave naturally as flying quantum bits (or qubits) over long distances and are practically immune from decoherence. They can also be easily manipulated and individually addressed with high precision by employing simple optical components that do not require cryogenic operation (unlike atomic systems for quantum simulation, which do).

Integrated photonic technology has given rise to a new generation of integrated waveguide structures consisting of complex quantum circuits with almost perfect intrinsic phase stability.2 Integrated photonics fabrication provides suitable platforms for quantum communication and computation, solving critical problems of scalability and reliability. In particular, complex arrays of interferometers incorporated on a single integrated platform allow arbitrary interconnections between photon paths. Such systems represent the hardware of a quantum optical simulator, as demonstrated recently with single- and two-photon quantum walk (QW) experiments, in which photons can make random steps in quantum superposition between different optical paths.3, 4 Our group at Sapienza University of Rome, Italy, in collaboration with a group at the Institute for Photonics and Nanotechnologies of the National Research Council, Italy, and the Polytechnic of Milan, Italy, has performed several QW experiments with two entangled photons. We vary the state phase of the photons to simulate non-interacting bosons or fermions, which are the two general classes of elementary particles. In this way, we have been able to investigate how the different particle statistics of bosons and fermions affect the evolution of particles travelling along an ordered 1D QW.5

Figure 1. Scheme of the integrated interferometric array implementing an eight-step 1D quantum walk (QW) with static disorder used in the Anderson localization experiment.8The discrete m-axis indicates the different sites (or spatial steps) of the QW, while the discrete n-axis identifies the different time steps. Colored boxes represent phase shifters and different colours indicate different phase shifts. The static disorder corresponds to the phase varying between sites but remaining constant in time along a site. To obtain a totally polarization-independent behaviour, we adopted a 3D geometry for the optical network, which is composed of nearly 60 cascaded beam splitters.

To realize more advanced simulations of other physical effects, we are developing larger size lattices, as well as suitable maps of both phase and transmission within the integrated interferometric network. We use femtosecond laser writing technology, directing focused femtosecond pulses at a glass substrate, which translates at constant velocity with respect to the laser beam.6 Non-linear absorption in the glass induces permanent and localized increases in the refractive index. The penetration of the laser light enables the fabrication of innovative 3D architectures in the bulk of the substrate. Previous experiments with femtosecond laser writing have demonstrated structures supporting the propagation of polarization-entangled states.5, 7 Our groups have recently provided two additional examples of the unique capabilities of femtosecond laser writing. The first one, performed in collaboration with the group of Scuola Normale Superiore at Pisa, Italy, is achieving Anderson localization (i.e., the trapping of scattered fields in a disordered material) with two entangled particles in an integrated 1D QW affected by static disorder.8 The second is the bosonic coalescence of three photons in a tritter (integrated three-port splitter).9 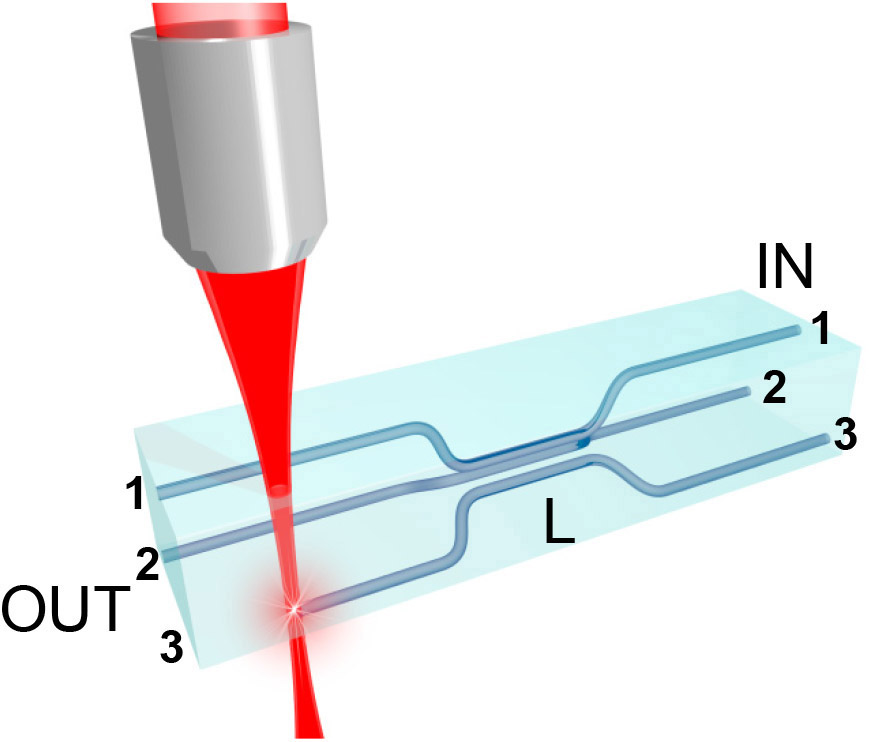 Figure 2. Schematic picture of the integrated three-port splitter (tritter) written within the glass substrate by a femtosecond laser beam. In the ideal case the waveguides lie at the vertex of an equilateral triangle, where key parameters are waveguide spacing and length in the interaction region (L).

For our first experiment, in which we simulated disordered phenomena with polarization-entangled photons, we required a novel setup that combined the following three items: polarization-independent elements, interferometric structures, and the ability to control the phase shift at different points of the QW circuit. We used large integrated waveguide circuits fabricated by femtosecond laser writing (see layout in Figure 1). We injected triplet and singlet polarization-entangled photon states into these circuits to mimic the behaviour of bosons and fermions.8 We chose a phase map distribution that exhibited static disorder (see Figure 1), creating favourable conditions for observing Anderson localization.

In our second experiment, the tritter consisted of three waveguides approaching and interacting in the coupling region (labeled L in Figure 2). Thanks to this configuration, we obtain equal coupling coefficients, such that a single photon entering in any input port has the same probability of exiting from any of the three output ports. We used this novel device to demonstrate experimentally that three indistinguishable photons entering separately through the three input ports have a larger probability of exiting together through the same output port.9 This phenomenon represents the natural extension of the two-photon bosonic coalescence demonstrated by the famous Hong-Ou-Mandel experiment.10 Our 3D approach avoids the use of cascaded beam splitters and phases, which are difficult to control. It also provides a compact device that can work as a modular structure for building up more complex architectures.

Fabio Sciarrino has published more than 90 papers on experimental quantum information in international journals. He has received several awards, including the Medal of the Presidency of the Republic and Le Scienze in Fisica. Recently, he was awarded a European Research Council consolidator grant for the ‘3D-Quantum Integrated Optical Simulation (3D-QUEST)’ project.

Paolo Mataloni teaches quantum optics. His main research interests have been oriented towards nonlinear optics, ultrafast optical phenomena, and spontaneous and stimulated emission in optical microcavities. In recent years he has carried out experiments on quantum information using entangled photons and optical technologies.