Quantum information is a research field with origins in the late 1980s and early 1990s, resulting from the merging of classical information and quantum physics. The main goal of this discipline is to understand the quantum nature of information and learn how to formulate, manipulate, and process it by using physical systems that operate on quantum mechanical principles. The development of such technologies will open up completely new schemes of information transfer and processing, enable new forms of communication, and in general enhance the power of computers.

We have recently developed the technology for handling qubits encoded in the polarization of light (‘polarization-encoded qubits’), which begin to realize some of this potential.5–7 In 2010 our team at Sapienza University of Rome collaborated with the Polytechnic of Milan and the Institute of Photonics and Nanotechnology (IFN-CNR) to produce a directional coupler fabricated by femtosecond laser-waveguide writing. This maskless and single-step technique allows the formation of circular transverse waveguide profiles, able to support the propagation of Gaussian modes with any polarization state, and hence any qubit value. Figure 1 shows how the qubit value is controlled by using our directional coupler as an integrated beam-splitter, exploiting its potential for supporting polarization-encoded qubits.5 Using this device, we first demonstrated quantum interference with polarization-entangled states. We next demonstrated the first integrated photonic controlled-NOT gate for polarization-encoded qubits.6 The logical truth table reconstructed from our measurements of the quantum gate closely matched what we had predicted from theory. In addition to advancing the field of quantum computation, this shows the capability of femtosecond laser microfabrication to produce polarization-sensitive waveguide devices, further enriching the portfolio of applications that can be addressed by this simple and flexible fabrication technique. 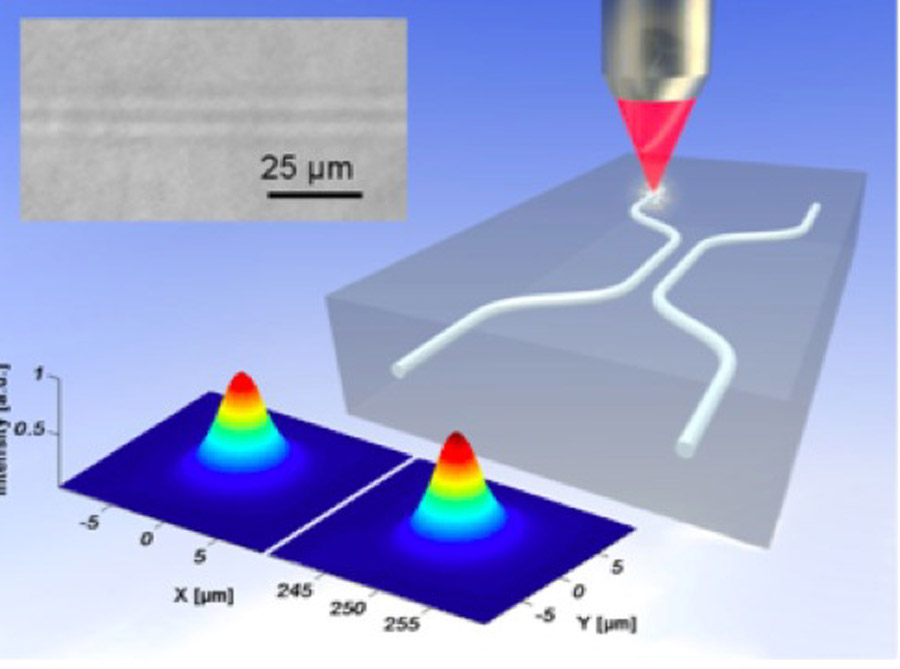 Figure 1. Schematic showing laser-written directional coupler made by femtosecond laser micromachining of bulk glass.5 Femtosecond IR pulses, focused into the substrate by a microscope objective, induce nonlinear absorption based on multiphoton and avalanche ionization. These processes lead to plasma formation and energy absorption in a small region confined around the focus, causing a permanent and localized modification of the bulk material. Using this approach, a smooth refractive index increase can be obtained. Light guiding can be carried out by moving the substrate with respect to the laser beam.

Our ability to manipulate polarization-entangled photons using integrated circuits is also useful for quantum simulations. One of the most promising of these is the quantum walk. Figure 2 shows how a ‘walker’—a quantum particle moving along a line—can turn both left and right at each turning in a superposition of states. At the quantum level, superposition phenomena and entanglement lead to non-classical behavior of the walker, giving rise to interesting and novel effects.7, 8 By adopting two-photon entangled states and polarization-preserving integrated photonic circuits, it is possible to investigate how both bosonic and fermionic particle statistics might influence a two-particle discrete quantum walk.7 The bunching-antibunching features of non-interacting bosons and fermions were simulated by exploiting polarization entanglement. We introduced a novel 3D geometry for our waveguide circuit, allowing accurate polarization-independent behavior. We implemented several balanced integrated interferometers on a chip that work for any polarization state. This allows a high degree control of transmission through the beamsplitter. 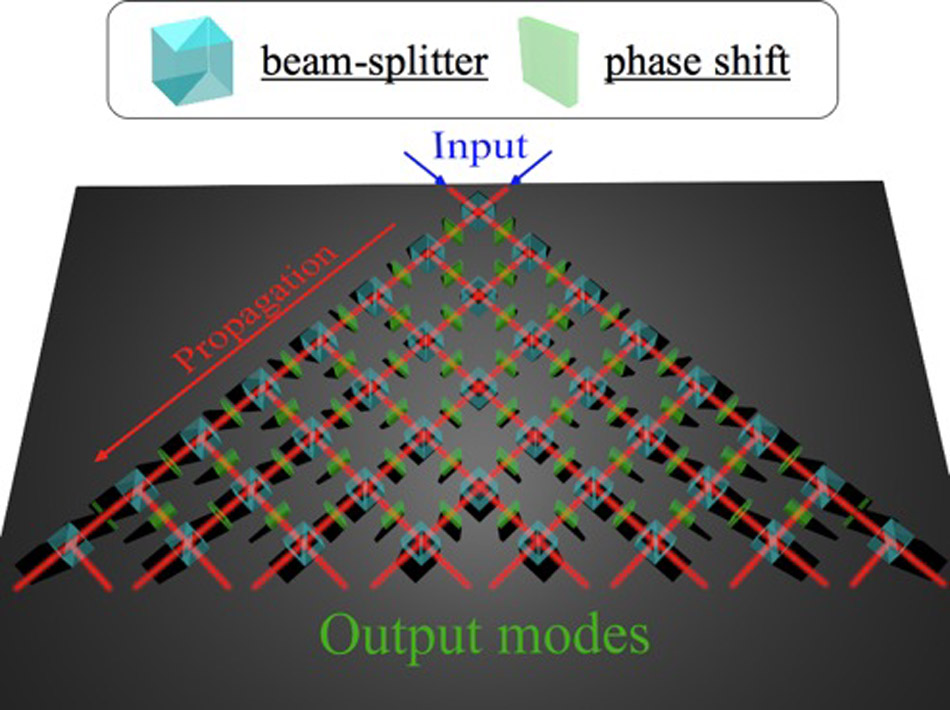 In the long term, we believe that the worldwide research effort devoted to the development of integrated circuits, sources, and detectors for quantum computation will result in computational power far exceeding classical electronic designs. Hard-to-simulate quantum scenarios, such as that shown in Figure 3, will be made more accessible.9 Our present results also suggest that we could integrate handling of hybrid quantum states based on different degrees of freedom of light: not only polarization, but also path and angular momentum. We next plan to implement pre-oriented and tunable waveplates on a chip, and to develop 3D integrated structures that will allow us to build complex multiport quantum gates for quantum computation.

Fabio Sciarrino is a researcher in experimental quantum information. He is the author of more than 90 publications in international journals and has received several awards, including the Medal of the Presidency of the Republic and Le Scienze in Fisica medal.