The mission of a proposed International Center for Zetta- and Exawatt Science and Technology is to develop a laser infrastructure that exceeds the current projected intensity limit of 0.2 exawatts.
03 August 2012
Gérard Mourou and Toshiki Tajima

The European Commission's planned Extreme Light Infrastructure (ELI)1 has built a compelling scientific case2 for the relevance of ultra-intense lasers to fundamental physics and its applications, such as high-energy particle acceleration and bright gamma rays. Based on the original vision of exa- and zettawatt (1018 and 1021W) lasers,3 we developed the intensity-pulse duration conjecture,4 which unifies high laser intensity with high-energy density by way of ultrahigh peak power in the exawatt–zettawatt regime and ultrashort pulses in the yocto–zeptosecond (10−24–10−21s) regime. In other words, if we wish to go beyond the current attosecond (10−18s) science into zeptosecond physics, we will need to increase laser intensity. In this same vein, the International Center for Zetta- and Exawatt Science and Technology (IZEST), a new concept proposed by the French atomic energy commission (CEA) and the École Polytechnique in September 2011, would provide a fresh impulse to large-scale laser infrastructure projects and reaffirm their importance (see Figure 1).5 Moreover, it would support advanced laser applications in a range of fields from materials science to medicine requiring electron energies that are not economically feasible using current accelerator technology. 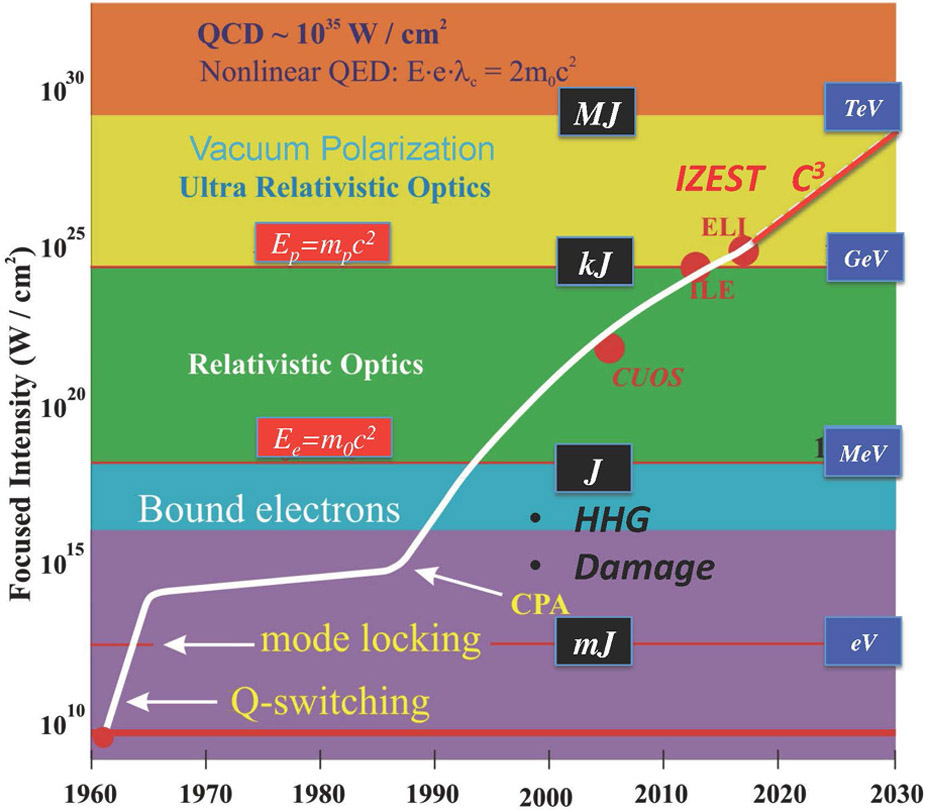 In the time domain, the aim is to produce extremely short pulses with durations in atto- to zeptoseconds associated with large fields to reach the needed intensities. IZEST will gather together the world's top researchers in laser science, plasma physics, nuclear physics, high-energy physics, general relativity, and the like. Such a center represents a plausible opportunity to carry out first attempts at 100GeV (1011eV) laser wakefield acceleration of electrons, the search for novel fields (such as dark matter and dark energy) by copious laser photons, and acceleration of ions over centimeters toward the TeV (1012eV) regime. These advances would be a stepping stone toward the next-generation highest-energy accelerator. Coordinated through IZEST, our objectives will be to form a team that can muster its forces to build the world's highest-intensity lasers. Additionally, we plan to vet the scientific potential of exawatt laser power and provide the scientific community and funding agencies with solid scientific and engineering directions and recommendations.

The current ELI project exploits conventional technology based on chirped pulse amplification (CPA) and optical parametric chirped pulse amplification (OPCPA). Due to large grating size and cost, however, it will be difficult to go beyond the 200 petawatt (2×1017W) level required for the highest-energy frontier. IZEST will explore new low-repetition-rate technologies and architectures that can be further implemented on advanced infrastructures such as XCELS (Exawatt Center for Extreme Light Science), planned in Russia. A new amplification method, called C3 for cascaded conversion compression,6 weaves the three basic compression techniques: CPA, OPCPA, and plasma compression by backward Raman amplification.7 C3 has the ability to efficiently compress kilojoule–megajoule nanosecond laser pulses into femtosecond pulses to produce exawatt-and-beyond peak power. The very small beam size, i.e., a few centimeters, along with the low-repetition-rate laser system will enable the use of inexpensive, disposable, precision optics. The resulting intensity should approach the so-called Schwinger value, at which nonlinear effects occur in a vacuum, thus opening up possibilities for studying the texture of vacuum, for example.

So far, fundamental and high-energy physics have mainly been driven by the high-energy colliding particle beam paradigm. Today, in addition to more compact and cheaper ways to do high-energy physics, the possibility of amplifying lasers to extreme energy and peak power offers a suite of complementary new alternatives underpinned by single-shot, large-field laser pulses in what might be called laser-based particle physics. The main mission of IZEST will be to unite the scientific community behind this new concept. As an example, we plan to use the laser field to probe the nonlinearity of vacuum. We envision that there is a wealth of fundamental physics issues worth pursuing without the large luminosity (high repetition rate) and expense of a collider. Pursuing a non-collider option will substantially shorten our timeline to this end. We could further condense it by adapting the existing large-energy laser or CEA's PETawatt Acquitaine Laser (PETAL) to even shorter pulse lengths.

The advancement of intense short-pulsed laser energy by two to three orders of magnitude offers the potential for important discoveries. These include TeV physics, physics beyond TeV, new light-mass weak-coupling field discovery potential, nonlinear quantum electrodynamic and quantum chromodynamic fields, radiation physics in the vicinity of the Schwinger field, and zeptosecond dynamic vacuum spectroscopy. In addition, we wish to take advantage of ultrashort pulses produced on the femto-, atto-, and zeptosecond timescale to practice a new type of particle/radiation precision metrology for revisiting current field theory. Finally, TeV particles that can be produced on demand would offer a new tool to bridge the observations of TeV and PeV astrophysics.

In summary, IZEST offers the possibility of a paradigm shift in fundamental particle physics, by which lasers could one day replace accelerators, enabling both unprecedented energies and practical applications from industry to medicine. IZEST is supported by the École Polytechnique and the CEA. To date, the center has sponsored events that include a 100GeV Ascent Workshop using the PETAL laser and other workshops on high-average-power fiber lasers. A first experiment using PETAL to explore the texture of vacuum will begin this year.