A chat with Alejandro Rodriguez of Princeton's Nanophotonics Design and Computation Group.

A passion for the intricacies behind video-game visuals was among the inspiring touchstones that drew Alejandro Rodriguez to a career in nanophotonics. "I was interested in computer science in high school," says the theoretical physicist. "One of the things that motivated me was game design, the idea that you can create a game-engine, a physics engine. And I was curious: in a video game, if I wanted to make a light source or to simulate gravity, how would that work? That got me interested in programming, so I learned Visual Basic. I started making programs, and that got me interested in mathematics: if you want to simulate a little string, you have to figure out what's actually happening inside the string, and then you come up with microscopically coupled-oscillator models and you think, ‘How do I learn about oscillators?' Well, physics teaches you about oscillators. And that kind of spiraled back into mathematics because you learn about connections to the Pythagorean theorem and other interesting maths."

Rodriguez had had plenty of science-minded grounding: his mother taught astronomy, while his stepfather held a doctorate in physics. "My parents instilled in me that there was value in science. They did so peripherally, with little comments here and there. For example, I was opening up a coke can one day in 8th grade, and my stepdad asked, ‘So where do you think these bubbles are coming from?' And I didn't know and neither did I have the inclination then to investigate or think about why, but those kinds of questions supported my sense that there was something interesting in the world worth knowing about. Then I found computer science, and I loved the idea of making something, creating something. That was my initiation into physics and science, being excited about making a video game, making something that I could call my own."

Today the assistant professor of electrical engineering at Princeton University truly has something to call his own: he leads Princeton's Nanophotonics Design and Computation Group which pursues wide-ranging areas of photonics stemming from Rodriguez' fascination with the power of light. (A cool comic strip on his personal webpage celebrates that phenomenon). "Everything you see around you is a consequence of light," Rodriguez points out. "The things we interpret visually, the signals that are transcribing information inside of you, they are all related to electromagnetic waves. Many of the most popular technological devices work with light -the internet, LEDs, TVs, smartphones. Electromagnetic forces also underlie everyday phenomena like normal forces and friction, which compete with gravity to allow us to walk. Quantum fluctuations of light are responsible for the stability of certain molecules and solids."

Nanophotonics is a huge discipline, and there are many incarnations and applications. Still, at what Rodriguez calls "the 20,000 foot view," it's basically about controlling light. "So how can you control light?" he says. "You can steer it, you can guide it - that's what a waveguide or fiber-optics system is - you can also confine it inside cavities. You can use it to control particles or to modulate mechanical systems or to enhance different kinds of light-matter interactions. You can convert light from one frequency to another - that relates to the underlying idea behind a laser: coherent emission of light. Lasers are just an incarnation of the idea of converting electromagnetic energy in a readily accessible form into light over some desired or scarce spectral range. And converting light from one form to another is really useful: it's useful in information systems, it's useful for energy transport. There are just so many applications and ways of using light."

Rodriguez' appreciation of light and its myriad uses has weathered a tiny bump or two. He vividly recalls learning about electromagnetism in a physics class: "That was very exciting and interesting. However, the rest of class time was spent on learning about lenses that have the virtue of being simple to describe mathematically - concave and convex lenses - the sub-field of geometrical optics. To a high school student, that was not the most riveting aspect of photonics. When I got to college at MIT, I wanted to learn more about general relativity and quantum mechanics and what I thought were all of these other, more beautiful theories. One summer I worked at LIGO, the Light Interferometer Observatory. I spent a month calculating the vibrational properties of the mirrors they use in the interferometer. For a month." He rolls his eyes. "That was pretty tedious." Back at MIT, a poster by John Joannopoulos' group caught his eye: "He was a very famous guy in photonics, but I had no idea. I just remember seeing pretty colors and images of waves - I didn't know it at the time, but I was looking at light propagating through a waveguide - and I thought, ‘Man, this is cool! This is light!' So I went to John and he said something along the lines of, ‘Unfortunately, you can't work with me yet, you're too young and I don't have a good project for you at this time.' I pestered him for weeks, and finally he emailed me: 'Hey, I have a project for you. Come by.' I met one of his students who had just started a position in the MIT math department, Steven Johnson, who's another really great scientist. And then I started working with them and fell in love with light. Again." 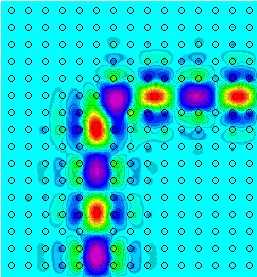 The image that caught Rodriguez' eye at MIT depicts a simulation of light propagating in a scatter-less fashion through a photonic-crystal waveguide bend.

Now he gets to play with light every day, and Rodriguez revels in his work. "What I really like about the photonics problems that I work on is that there's a duality to them: they are motivated by both interesting fundamental questions as well as short and longer-term applications. Part of my work deals with quantum and thermal fluctuation - Casimir interactions or van der Waal interactions or heat exchange - and thermal radiation. These processes have many applications, including thermophotovoltaic energy generation, where you convert radiation in the form of hot photons to electricity."

Another aspect of his work uses inverse design or large-scale optimization: "When you're talking about inverse design, you're talking about computer algorithms that are automating the process of designing photonic systems - it's a design tool in the same way that AutoCAD is a tool for architects. Such a tool has many applications, for instance in photonic neural networks, or solar absorbers, or many problems in nonlinear optics which stand to benefit from gains in efficiency. It's potentially game-changing really, especially if you imagine the design of large-scale nanophotonic networks or optoelectronic computer architectures that rely on specific photonic elements that all have to be designed to operate and couple efficiently to one another. That's a very tedious and hard task to do by hand; this tool could automate that work." 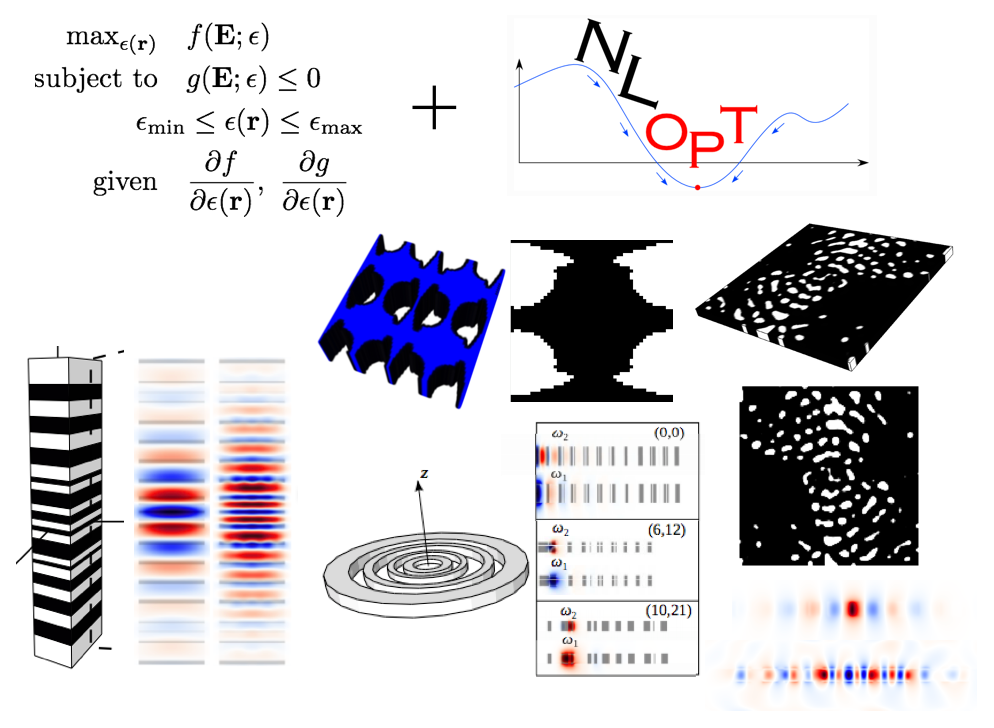 Large-scale photonic optimization algorithms have begun to enable micro-resonators - a selection of which are shown in the collage - capable of confining and enabling light at several wavelengths to interact strongly in ultra-small spatial volumes.

Inverse design is at the heart of a collaborative passion-project for which Rodriguez's team has made theoretical predictions: "We've used inverse design to show that you can confine light of multiple wavelengths for a very long time, and in so doing make the most efficient and smallest on-chip frequency converters, for instance to enable high-efficiency single-photon frequency conversion," Rodriguez explains. His team's predictions are being validated by a team of experimentalists at the University of Washington and Duke University through a National Science Foundation-funded project whose main aim is to develop an efficient, on-chip quantum-transmission node. "This," notes Rodriguez, "would have important - and practical - applications to quantum-information processing."

Today, that experiment is ongoing, a canny descriptive which pretty much sums up the arc of Rodriguez' well-lit career, one also ineluctably marked by mentorship and collaboration. "I would not be where I am today where it not for the constant support and motivation of my two advisors, John Joannopoulos and Steven Johnson," says Rodriguez. "I keep that in mind every day, in every way, as I work with other researchers, other groups, and as I mentor a team of my own."