Optical lattices, onto which ultracold atoms are placed, enable the formation of stable gap-type dark localized modes in both one- and two-dimensional geometries
28 August 2019
Publications, Technology

Bose-Einstein condensate (BEC), a state of matter composed of ideal dilute Bose gases cooled down to an extremely low temperature, is a nonlinear medium whose nonlinearity originates from intrinsic atom-atom collisions. Theories and experiments have confirmed the existence of various emergent nonlinear phenomena in BEC, such as matter-wave four-wave mixing, bright and dark solitons, vortices, and vortex lattices.

The formation of solitons in nonlinear media happens because of a balance between diffraction and nonlinearity. Bright solitons and dark ones, which are supported by self-focusing and self-defocusing nonlinearities, have been created experimentally in atomic condensates. Particularly, dark solitons in cigar-shaped BECs have been observed. Optical lattices help to stabilize various kinds of solitons in BEC—an iconic result is the realization of bright gap solitons. However, the dark gap solitons have remained experimentally unproven, and their properties in more than one dimension, unknown.

Recently, researchers from Xi'an Institute of Optics and Precision Mechanics of the Chinese Academy of Sciences predicted that optical lattices, onto which ultracold atoms are placed, enable the formation of stable gap-type dark localized modes in both one- and two-dimensional geometries. They introduced bright defects to optical lattices to accomplish the mission of stabilizing 2-D dark gap solitons and vortices, which was previously considered to be challenging in a 2-D lattice.

Since this defect-engineering method is widely used in semiconductor technology to design optical devices, and the hollow defects (holes) adhering to optical lattices lead to the formation of 2-D intraband solitons, introducing bright defects to the 2-D lattice is a natural and promising way to stabilize 2-D dark localized modes—dark gap solitons and clusters, and their vortical counterparts. 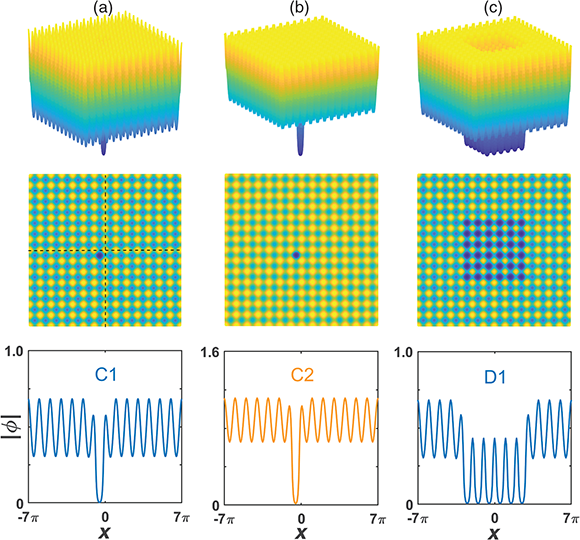 Numerous studies have demonstrated that gap-type dark localized modes (1-D and 2-D gap solitons and soliton clusters) are situated on the ground-state nonlinear Bloch waves of the underlying model, which is a typical feature for the dark modes of that type. Notably, the dark gap soliton clusters (and their vortical counterparts) are a new kind of localized mode that expands the soliton family—bright gap waves were confirmed recently in similar physical contexts with periodic potentials.

The predicted results pave the way toward realizing both gap-type dark solitons and vortical ones in current ultracold atom laboratories, opening a new direction to research various other types of excitations, e.g., ring dark solitons and vortex composites, in similar physical settings and beyond.