Artist’s impression of the Spectrum-Roentgen-Gamma telescope. Credit: The Planetary Society

After delays due to technical difficulties, the joint German-Russian mission Spectrum-Roentgen-Gamma (Spektr-RG) launched successfully on 13 July from the Baikonur Cosmodrome in Kazakhstan. The launch occurred just in time, as its fourth window of opportunity was about to close.

"We have four launch windows per year depending on the chosen trajectory towards L2," says Peter Predehl, an x-ray astronomer at the Max Planck Institute for Extraterrestrial Physics, and the German lead scientist for the mission. L2 refers to one of a series of Lagrange points — equilibrium points in space where the gravitational forces of two large bodies, such as the Sun and the Earth, allow a smaller object to maintain a position relative to the two larger ones. L2 is considered an ideal spot for astronomy, because a spacecraft parked there is still close enough to communicate with Earth, and the location provides a clear view of deep space. 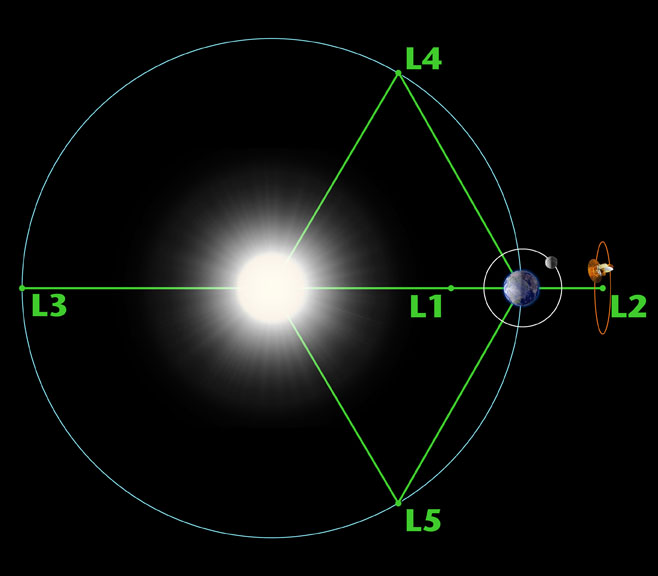 "The cruise to L2 takes about three months and an orbit around L2 lasts about half a year," says Predehl. "Spektr-RG has to be above the ecliptic in summer to be seen from Russian ground antennas which are northern. L2 is exactly opposite to the Sun, therefore in summer, it is as low as the sun in winter."

Spektr-RG will conduct a series of eight whole-sky x-ray surveys, each lasting six months, in the first four years of operation. It will then begin more detailed observations of specific targets of interest at high energies. The entire mission is expected to last at least six and a half years.

Getting off the ground
Spektr-RG was first proposed in the 1980s as part of a series of observatories for the Russian space agency, Roscosmos. Scrapped in the 1990s due to budget cuts, the project was revived and redesigned in 2005 to be smaller, simpler, and less expensive.

Designed as two telescopes in one, the Spektr-RG consists of the German-developed Extended Roentgen Survey with an Imaging Telescope Array (eROSITA) and the Russian-built Astronomical Roentgen Telescope-X-ray Concentrator (ART-XC). 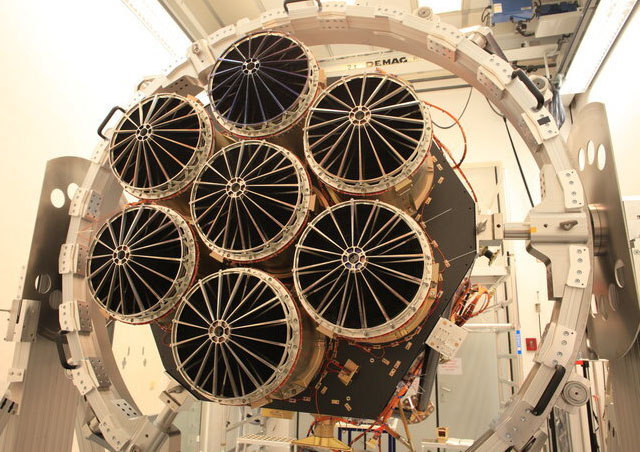 The eRosita x-ray telescope. After the mirrors and cameras had been integrated in the cleanroom of the Max Planck Institute for Extraterrestrial Physics, the x-ray "eyes" were closed by a protective flap. Credit: Peter Friedrich/MPE

eROSITA features seven telescope modules, each with an x-ray mirror system and x-ray-sensitive CCD camera. Designed to map the intergalactic medium and filaments between clusters of galaxies, this instrument will help researchers better understand the development and structure of the cosmos, as well as investigate dark energy.

The ART-XC telescope has a carbon fiber optical bench holding seven mirror modules, which focus incident radiation onto seven detectors at the other end of its structure. ART-XC is designed to study high-energy or "hard" x-rays, while eROSITA will observe lower-energy "soft" x-rays between 0.3 and 11 keV (4.1 to 0.12 nm wavelength). These different energy ranges allow Spektr-RG to cover almost the entire x-ray spectrum. There is also an overlap between 5 and 11 keV, which allows the telescopes to be calibrated against each other and verify each other's observations.

What makes Spektr-RG special
"This is a first for x-ray astronomy!" says Francesca Civano, an astrophysicist at the Harvard Smithsonian Center for Astrophysics. Civano, the deputy lead in the Data Systems Operations group at the Chandra X-ray Center, isn't part of the Spektr-RG team, but has been following the project as have many who are fascinated by the idea of using x-ray telescopes to map the universe.

"What is special about this mission, is that eROSITA and ART-XC will scan the sky at the same time," says Civano. "We do not have any other x-ray telescopes flying with both hard and soft x-ray instruments — and with such good spatial resolution." 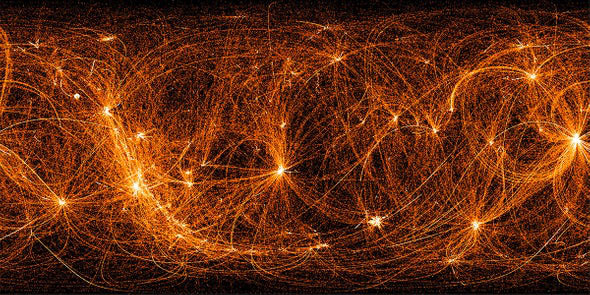 An image of the x-ray sky, as recorded by NASA's Neutron star Interior Composition Explorer (NICER) payload aboard the International Space Station (ISS). The arcs are an artifact of NICER's observations, produced when the instrument slews to track bright x-ray sources as the ISS moves into Earth's shadow. New observations from Spektr-RG will create a more detailed and robust all-sky x-ray map. Credit: NASA and NICER

Civano notes that current missions, such as Chandra's X-ray Observatory and NuSTAR, can see high-energy radiation and tiny details of cosmic structures, but they only observe small parts of the sky. eROSITA will detect hundreds of thousands of active galactic nuclei and rare sources that otherwise wouldn't be seen.

"One excellent application will be to use quasars for cosmology as proposed by Guido Risaliti and Elisabeta Lusso in the past few years," says Civano. "Having access to a lot of sources will allow astronomers to calibrate the Hubble Diagram using quasars to very high redshifts. Variability studies will also be interesting as sources will be observed over and over; and we will find changing-look quasars, going from obscured to unobscured and vice versa, and also transient sources."

Like many other astrophysicist and researchers around the world, Civano is looking forward to the release of the data in a few years. "One of my favorite fields, COSMOS, will be observed comprehensively," says Civano. "It will be exciting to look for transients and variability since we already have a baseline of data with both Chandra and XMM-Newton."

The eROSITA X-ray mirrors: technology and qualification aspects of the production of mandrels, shells and mirror modules

How eROSITA was made