The biggest thing in the future of remote sensing will be the relatively small spacecraft known as a CubeSat
01 July 2019
By Stephen G. Anderson
Technology

It may well be that the biggest thing in the future of remote sensing will be the relatively small spacecraft known as a CubeSat.

"There is no doubt in my mind that, within the next few years, small spacecraft will be a regular and accepted capability for Earth remote-sensing measurements," observed Dr. Charles Norton, special advisor, Small Spacecraft Missions at NASA. "They are going to impact not just the quality of our existing science but also allow us to make new types of improved science measurements that otherwise would not be possible with other platforms," he said.

CubeSats emerged about 20 years ago as an academic engineering project. Conceived at Cal Poly and Stanford University in 1999, the project was intended to enable university students to gain design, manufacture, and test experience with small satellites intended for low Earth orbit (LEO) within the time and financial constraints of a graduate degree program. The first six CubeSats entered orbit in June 2003 from Russia's Plesetsk launch site.

Since then, more than 1,000 CubeSats have been launched into LEO, and small spacecraft have evolved into a significant global enterprise involving national space agencies as well as many commercial entities. Recently, CubeSats even ventured into deep space when two were launched in May 2018 to support the InSight mission to Mars.

While satellites of all types are big business, with global industry revenues exceeding $260 billion in 2017, the small satellites segment is the one driving significant growth, according to the Satellite Industry Association (SIA).

There were 1,738 satellites operated by entities from 62 countries orbiting the Earth at the close of 2017. Of those, almost one third were involved in Earth observation and meteorology. In terms of small and very small satellites (i.e., with mass of less than 1,200 kg), the SIA reports that small craft account for about half of the total 3,000 metric tons currently in orbit. Furthermore, the number of satellites in orbit increased 49% over five years (from 1,167 in 2013) mostly due to newly launched small systems into LEO.

The rapid growth of the small satellite segment is a direct result of the significant benefits they offer in terms of cost, flexibility, speed, and access to space. From the beginning, CubeSats were assembled with commercial off-the-shelf (COTS) parts, and most still are. That reduces costs while also allowing a high degree of design flexibly for both the platform and its instrument payload. Using COTS parts also means that assembly of the craft takes less time as compared to more traditional satellites.

Norton explains that there have been sustained ongoing efforts to miniaturize instrumentation—in terms of reducing size, weight, and power—for large strategic space missions, while maintaining accuracy in resolution and measurement quality. The miniaturization efforts have only intensified by the desire to utilize them on small satellites as well.

The relatively lower weight and complexity of these small craft, combined with the standardized small footprint, mean they can be launched with a much shorter lead time than traditional satellites. They can go into space via a ridesharing program with an already planned launch, with a supply mission to the International Space Station, which hosts a CubeSat launch system, or through dedicated launch capabilities. In addition, many of them can be launched simultaneously to operate together in space as a constellation.

Norton characterizes CubeSats as a disruptive technology likely to have a long-term impact, not unlike the cellphone camera. Initially, the capabilities were not great, but development over time has pushed the performance of CubeSats to the point where they can now deliver targeted high-quality remote sensing measurements, while CubeSat constellations will provide new types of observations and data products.

The Cyclone Global Navigation Satellite System (CYGNSS), for instance, is operated by NASA and uses eight CubeSats launched together in a single launch vehicle to make accurate measurements of ocean surface winds in and near the eye of the storm throughout the lifecycle of tropical cyclones, typhoons, and hurricanes.

The private sector holds the record for the most satellites launched at once from one rocket. The Dove satellite constellation has been deployed from both the International Space Station and conventional rockets to low earth orbit to take daily images of Earth. The constellation makes up history's largest fleet of Earth-imaging satellites and can image up to 250 million km2 per day. Operated by Planet Labs Inc., the satellite constellation currently consists of more than 120 nanosatellites called Doves weighing only 11 pounds each, and providing 3-meter multispectral image resolution for a variety of mapping applications, ranging from monitoring deforestation and urbanization, to improving natural disaster relief and agricultural yields around the world. The constellation is capable of imaging the entire surface of the Earth each day with revisit rates that are more frequent than existing government or commercial satellites. 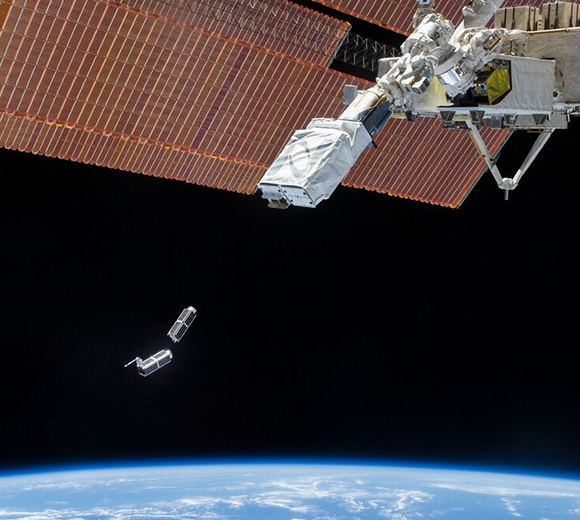 A set of NanoRacks CubeSats are deployed from the International Space Station.

In fact, the small satellite private sector is one area where NASA has been very interested and is making investments, says Norton. NASA is looking at the quality of remote sensing data collected by industry and exploring how or if that data can be used scientifically (see below).

Impromptu in-space experiments is another area enabled by the design and operation of small spacecraft, according to NASA. Their flexibility and responsiveness provide mission operators the ability to take advantage of opportunities to perform additional maneuvers and procedures not previously envisioned for a particular mission. In this context, NASA recently demonstrated that an optical crosslink between two orbiting CubeSats is feasible with proper pointing and alignment of the emitting and receiving spacecraft. This is an important stepping stone in terms of satellite-to-satellite communications, since most satellites currently rely on ground stations for their coordination.

Looking forward, Norton stresses that the large satellite missions are not going away. "They still have their role," he said.

"In fact instrument scientists in remote sensing are looking at ways in which they could combine and support large strategic missions with small spacecraft observations as well," he said. "Those types of combined measurements with data from multiple satellites and use of data analytics and fusion techniques will likely generate new insights into all types of remote sensing measurements."

-Stephen G. Anderson is the SPIE Director of Industry Development.

Creating and selling high-res Earth images is the bread and butter of commercial CubeSat companies. Their images fill a missing spatial gap not available with MODIS or LANDSAT that gets down to the scale of a few meters. That range is close enough to visualize individual tree stands, an issue of importance to Dr. Brian Johnson from the Earth Lab at University of Colorado, Boulder. In 2018, he published a study that investigated whether Planet Lab's Dove satellite imagery could be harnessed to collect accurate scientific data and monitor forest health. His conclusions weren't encouraging.

He noted that the imagery from commercial CubeSats is not calibrated on a standard radiance or reflectance scale, so comparing the resulting images with MODIS or LANDSAT imaging is a challenge. And, a constellation of Dove satellites has as many sensors as it does satellites, and not all of them are calibrated to each other. They each have their own characteristics, gains, and offsets. Johnson said, "You'd see differences in images, but you're not sure if it's the sensor characteristics or if it's a real difference in what you're seeing on the ground."

That distinction is obviously important to scientists conducting climate research. Sandra Cauffman is the acting director of NASA's Earth Science Division, and she's overseeing NASA's Earth science data-buy program, which has contracted with commercial satellite companies Planet, Digital Globe, and SPIRE. She agrees that preliminary reports are showing some problems, primarily with calibration, discrepancies between spectral reflectance of vegetation, and discontinuities with atmospheric correction.

Planet appears to be interested in understanding-and correcting-these problems. They recently calibrated a subset of their CubeSat flock by looking at invariant ground targets, like deserts, and comparing against other calibrated imagery. "If the same satellites-MODIS, LANDSAT, and Planet-are all looking at the same patch of ground, they ought to be looking at the same reflectance. If they don't, corrections can be made so that they all agree," explained Johnson.

If the company chooses to continue this calibration practice, then they will eventually get a normalizing factor across the flock of satellites. But, these small and inexpensive units only have a lifetime of one to two years, so there's a constant turnover of the sensors. They would have to do this calibration routinely.

While CubeSats designed and calibrated for gathering scientific data-like JPL's RainCube and TEMPEST-D-are delivering game-changing results for earth science research, there's still work to be done by optical engineers and imaging experts before commercial CubeSats will be reliable for scientific data.