The SPIE Early Career Achievement Awards recognize young professionals' significant and innovative technical contributions in the engineering or scientific fields of relevance to SPIE, honoring excellence in academia and industry/government. Receiving the 2019 awards are three of SPIE's most promising stars.

For her pioneering work on optical imaging and spectroscopy, enhanced by her use of x-rays, magnetic resonance, and photoacoustics, and for making significant advances in molecular imaging
for cancer research.

As a graduate student at University College London, SPIE Member Sarah Elizabeth Bohndiek studied radiation physics, assessing and exploiting the capabilities of the then newly emerging CMOS image sensors for x-ray imaging. She developed new testing methodologies for these nonlinear devices and first presented her findings at SPIE Photonics West 2007. As a postdoctoral fellow at the University of Cambridge and Stanford University, she made major contributions to the field of molecular imaging using nonionizing radiation, including magnetic resonance and optical imaging methods. Today, as a group leader appointed jointly between the Department of Physics and Cancer Research UK Institute in Cambridge, Bohndiek is developing biomedical imaging techniques to improve cancer patient management. She is an SPIE Student Chapter Advisor for the University of Cambridge, actively champions the chapter within the physics department and to local industry, and sponsors lab members to participate in SPIE meetings. For SPIE Photonics Europe 2016, she organized and delivered a Women in Optics event, as well as gave a plenary talk. Her unique perspective, built through training in physics, biochemistry, and radiology, has burnished a reputation as an emerging multidisciplinary research leader in her field.

In recognition of his original contributions to integrated optics and photonics through innovative material and device engineering.

Juejun Hu became an independent investigator in 2010 and has been pioneering novel optical materials and their applications in integrated photonics ever since. His research, which focuses on photonic materials and devices for sensing, photovoltaics, and communications, has already impacted industry: his work on a solution processing of high-index glass optical adhesives method enabled University of Illinois and Semprius Inc. to fabricate stacked solar cells with the then-record efficiency of 44%. Currently at MIT, Hu leads the Photonic Materials Group in their work on novel photonic materials such as chalcogenide glasses and phase change materials, while exploring their applications in integrated photonics. Lauded as a scientist who "[thrives] in a problem-rich environment," Hu's more than 80 papers and eight US patents have solved major technology roadblocks in communication and sensing. An active SPIE Member, he has also served as a conference session co-organizer at SPIE Photonics West and Defense + Commercial Sensing. 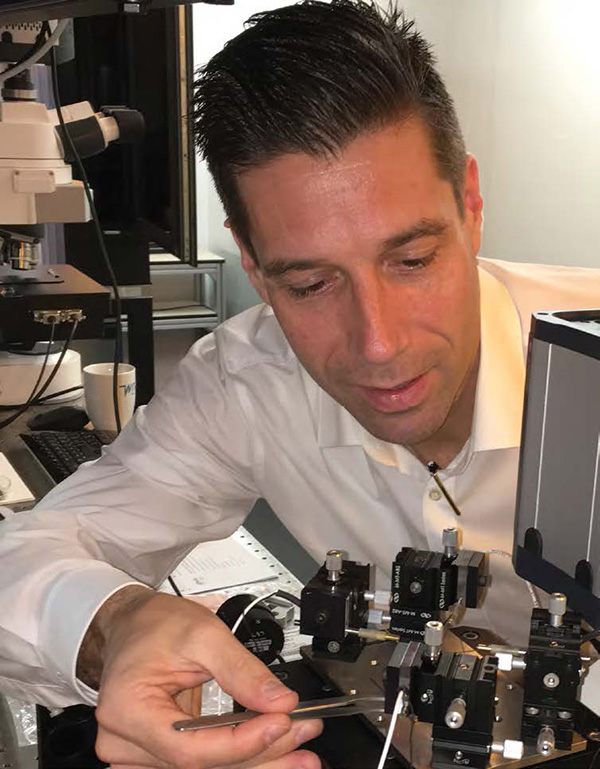 In recognition for his pioneering and influential contributions to industrial and applied optics, especially the nanometer-scale optical characterization and photonic application of one- and two-dimensional materials.

SPIE Member Mathias Steiner's success started with his diploma thesis: the development of a Fourier transform imaging spectrometer for remote sensing applications, an industry collaboration for the European Space Agency. His doctoral thesis then combined conceptions from quantum optics, photonics, and molecular spectroscopy to develop an optical cavity that allows for spatially immobilizing molecules within a photonic structure and studying optical coupling on the level of individual emitters and single photons. During a postdoctoral fellowship at the IBM T. J. Watson Research Center, Steiner developed experimental techniques for studying optical properties of one- and two-dimensional nanostructures-including carbon nanotubes and graphene-embedded as functional components in optoelectronic and photonic devices. At Brazil's IBM Research Lab in 2013, Steiner established an interdisciplinary effort to study the interactions of liquids and solids at the nanometer scale, research with future applications in the recovery of natural resources. Today, Steiner's team at IBM conducts experimental and computational R&D for industrial-scale applications. As part of his ongoing efforts to strengthen optical science and engineering in Latin America, he has also initiated a collaboration between IBM Research and Brazil's Federal University of Minas Gerais, focusing on optical nanospectroscopy for industrial applications.