The field of medical imaging is commonly thought of as one where the human body is volumetrically imaged by x-ray, computed tomography (CT), MRI, ultrasound, and nuclear medicine while optical imaging is virtually ignored. Indeed, most market research, instruction, or field analysis of medical imaging focuses on the radiologic perspective of imaging tools, where optics is a footnote related to detector technologies.

However, rather than a small role, optics has the dominant role in medical imaging. Commercially, it has the largest valuation of any sector of the field, it has the most diverse products, and its future growth potential is huge.

Perspectives on the molecular and cellular sensitivity of optical imaging instruments suggest that optics will be the main conduit toward more personalized medicine and point-of-care technologies, which can only be achieved with simultaneous low cost of production and high sensitivity and specificity of signal detection.

This discussion is divided into an analysis of the practice of medicine, the medical imaging market sectors, strategic analysis of strengths and weaknesses for optics relative to other imaging technologies, and some future perspectives.

Most physicians use optics
The practice of medicine is vast, and the number of practicing physicians in the United States, according to the American Medical Association (AMA) database, is approximately 800,000. The breakdown of what each physician does is based upon their specialty, and the list of specialties is shown at right, with color coding according to whether the physicians primarily utilize optical instruments, radiologic instruments, or both. From this cursory inspection, the vast majority of physicians use optical instruments primarily, and a small fraction primarily use radiological devices.

Separating things this way suggests that there are 489,000 physicians using primarily optical devices, while 62,000 use primarily radiologic imaging instruments, and 139,000 use both to some degree. While many specialties such as surgery utilize radiology scans, they are most often ordered through the radiology department.

The type of optical devices used by physicians varies widely, with scopes being the most obvious for inspection of surfaces and cavities. Gastroenterology and surgery have some of the most specialized optical devices, with unique needs for laparoscopy, colonoscopy, endoscopy, etc.

There are easily thousands of types of these scoping devices, made by dozens of large companies and operated by nearly 120,000 users. The other major high-tech optical imaging sectors are for microscopes in pathology, microscopic surgical subspecialties, and ophthalmologic eye-testing/treatment systems. The information gained in most of these optical systems is unique to the optical nature of the images, with appropriate spatial resolution, tissue access, and match to the physician's own eyes.

However, perhaps the most underestimated users of optical devices are the practicing family physicians, pediatricians, and general internal medicine doctors who use basic, low-cost scopes for almost every patient, including the plastic otoscope for ear and ophthalmoscope for the eye. These are the forgotten basic tools of everyday medicine, but form the front line of detection of all diseases.

Second-check exams, for visual diagnosis and treatment at the point of care, are done in gynecologic colposcopy and urologic cystoscopy. These clinical tools are very likely the largest number of medical imaging devices used worldwide, outpacing radiological imaging by several orders of magnitude in low-resource settings.

The diversity of scope devices is enormous and is likely not considered in the medical imaging world. Yet they clearly do form the single largest number of imaging devices used in medicine. 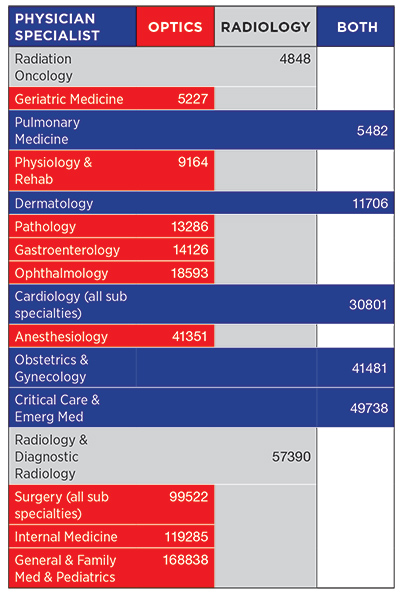 Physician specialties in the US, color coded according to their predominant use of optical devices (red), radiological devices (black text), or both (blue).

Medical imaging sectors
Another measure by which the role of optics can be quantified is market analysis. In the highlights of its market research reports, BCC Research estimated the global market for all medical devices at US$458 billion in 2015, and a 2012 report pegged the global medical-imaging market valuation at $34 billion by 2017. Highlights from BCC Research reports characterized the market into four main segments, including x-ray/CT (expected to reach $16.3 billion in 2017), ultrasound ($7.1 billion by 2017), MRI ($7.5 billion), and positron emission tomography (PET) ($3.2 billion by 2017).

A related sector that adopts radiological imaging into devices is radiotherapy, valued by BCC Research at $6.4 billion for 2016. There are many other related reports for individual technologies and related products and reagents, but this captures a reasonable estimate of the radiological systems global market, within the margin of error expected.

Again, most market analyses on medical imaging implicitly ignore the optical sector. However, BCC has separate market analyses for endoscopy, most recently listed at $32.5 billion in 2015; microscopy, listed at $4.6 billion in 2015; and ophthalmology, estimated to reach $20.2 billion in 2017. A BCC report highlight suggests that the surgical equipment market was valued at $6.1 billion for 2015, and the medical robotics market is also a rapidly emerging segment, listed in BCC report highlights at $4 billion in 2016. The medical laser market is also robust, listed at nearly $5 billion in 2016. A chart summarizing these market valuations is shown above right, with the optical systems markets comprising roughly 2/3 of the whole.

Not included in any of this, but an enormous market sector, is home healthcare, with mobile health, listed at $13.2 billion in 2016, and the wearable devices market (the active optical component of this home healthcare market), with a valuation of $5.5 billion in 2016. Although the mobile health and wearables markets are considered separate, their growth rate far exceeds the medical devices' growth rate and so should be considered. However, since this is a home products marketplace, it is excluded from the medical imaging analysis proposed here. 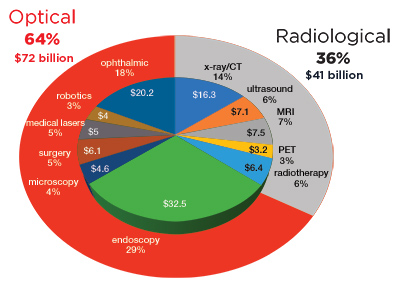 Global market valuation, 2015-2017, in US$ billions for most major segments related to medical imaging, including optical systems.

Optical components' role
The role of optics in basic detector technology is one that is more obviously known and characterized. Virtually all detectors are based upon solid-state technology in modern devices, with a few rare exceptions. Additionally, display technologies are now largely based upon LED and solid-state optical laser innovations.

So, while these two major technology sectors are not considered medical imaging, these components are necessary for medical imaging to function at the high fidelity that it does.

The strengths of optical imaging are demonstrated by the large global market for these, including the core use of optical detectors within radiologic devices and displays. Optical imaging also has always had the strength of providing real-time display to the physician, especially from remote sites not easily accessible, and it will likely remain the tool of choice. This will be tested further as augmented vision is needed to replace the physician's eye and the ability to see naturally within the body in real time.

The drive toward low-cost optics has significantly benefitted medicine, with massive impact in countries where primary care is the only form of specialty that exists, and that covers most of the world's population.

The weaknesses and threats are linked in that they limit what is possible today and threaten to reduce the impact of optics in some cases. A good example of this is the high cost to produce any well engineered device and get it cleared through the US Food & Drug Administration. Given that most components of each optical system are custom designed and sourced for the device, there is inherent overhead. This can be offset by modularity of design and the growth in lower-cost but high-performance components.

One area that will not likely change is the limited role that optics has in deep tissue imaging. The amount of research in this area is enormous, mainly because it is a hard problem that seeks computational or high-technology solutions.

While inroads are being made in the millimeter- and centimeter-scale penetration, whole-body and limb imaging is an area where radiologic devices will always have a distinct advantage. 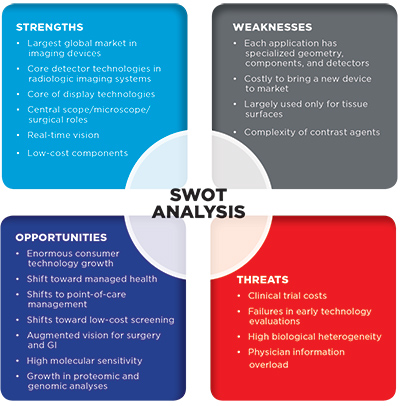 Future growth areas
Opportunities listed in the SWOT analysis will continue to be growth areas for optical imaging technologies. The largest and most unpredictable market shifts will be where consumer technologies impact medical imaging, through creation of lower-cost optical subsystems. These will most importantly impact point-of-care technology, where the use of measurement devices needs to be relocated from specialty care and specialized laboratories to real-time, direct patient care.

Additionally, with the ongoing shifts to managed healthcare instead of acute treatment, tools used will increasingly be diagnostic in nature and less invasive. Or they will be point-of-care based, which inherently favors optical procedures over radiological procedures.

This shift will empower general practitioners and pediatricians more and push toward lower-cost devices that give the needed diagnostic information. This is not so much a revolution as it is part of the constant evolution, and optical imaging will clearly be one of the largest growth sectors in this continual evolution.

High-tech augmented vision for surgeons and gastroenterologists will grow, while the growth for core components and technologies in the low-tech market will likely follow the medical physician numbers. Innovations that improve patient health will likely come in the setting where imaging helps to individualize detection and treatment of disease.

Point-of-care efforts will push translation of molecular pathology tools toward family physicians and internal medicine specialists, while advanced molecular and genomic tools will advance for interventional specialists in surgery and gastroenterology.

More broadly, the largest societal impacts would be in earlier detection via screening technologies. Undoubtedly, optical imaging will continue to grow and maintain its role as the largest technological specialty in medical imaging.

-Brian W. Pogue is professor and director of MS and PhD programs in Engineering Science and Medical Physics at Dartmouth (USA). He works in the Center for Imaging Medicine at the Dartmouth-Hitchcock Medical Center, an interdisciplinary laboratory where biomedical engineering, surgery, radiation oncology, and radiology intersect to address healthcare research. In January 2018, he became editor-in-chief of the Journal of Biomedical Optics, published by SPIE.