Twenty years ago, SPIE Fellow Jin U. Kang was an undergraduate student discovering the theory behind optics and photonics. Although he found the theory interesting, what Kang really loved was building lasers and other optical devices.

Since then, Kang has become a professor and chair of the Electrical and Computer Engineering Department at Johns Hopkins University (JHU) in Baltimore, MD (USA). He conducts research in biophotonics, fiber optics, and optoelectronic devices for applications in medicine and communications. 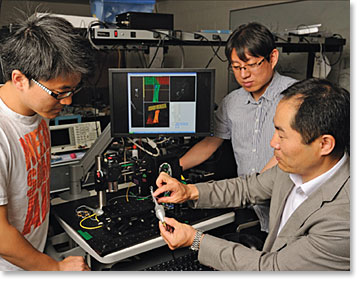 One of his primary focus areas is developing 3D imaging and sensing systems for guided surgical intervention.

Kang describes one of his latest devices — a “smart” tool with sensors to help guide surgery — in an SPIE Newsroom video interview.

“I got into optics because I had two great professors at Western Washington University (USA), Drs. (Rick) Feinberg and (Joseph) Veit,” Kang says. “Under their supervision, I built a pulsed ruby laser for holography and other optical devices, which was an indispensable experience that taught me the fundamentals.”

While he liked the courses and theoretical aspects of optics, it was designing and building devices and seeing them work that inspired him to pursue a career in the field. After receiving a physics degree in 1992, Kang then earned an MS and PhD in optical science and engineering at the University of Central Florida.

“It made me really appreciate the science, and made it more enjoyable,” Kang says. “I highly suggest that students at all levels get involved with independent projects and design and build something they are interested in.”

The smart surgical tool developed in Kang’s lab at JHU consists of a laser probe made of a tiny fiber optic cable. Using optical coherence tomography (OCT), the laser emits light that bounces off surrounding tissue — for example, the retina, in the case of eye surgery. The tool processes information about the length of the bounce to create a digital image and to measure the distance between the tip of the fiber and the surface of the tissue.

A motor that controls the movement of the tool tip automatically adjusts the distance of the tip from the tissue to allow surgeons to perform procedures more safely and accurately, compensating for the surgeon’s hand tremor and lack of depth perception in microsurgeries.

Going forward, he sees the technology being used to enhance the responsiveness and accuracy of surgical robotics as well.

Kang has published over 130 journal articles and 180 conference proceedings papers, including more than 40 with SPIE, and serves on the program committee of the Optical Fibers and Sensors for Medical Diagnostics and Treatment Applications conference at SPIE Photonics West in San Francisco. He is serving on the scientific committee for the first annual International Biophotonics Meeting in Israel in December 2012 where he also is presenting a paper on his ultrafast 3D OCT imaging system.