Women working in the field of optics and photonics are passionate about their profession. They have learned the importance of building and maintaining professional relationships and of moving past obstacles and negative criticism in order to grow in their careers.

SPIE Women in Optics works to promote personal and professional growth for such women through community-building networking opportunities and by encouraging young women and girls to consider optics as a career. The group produces the SPIE Women in Optics monthly planner to showcase the work of women in optics and photonics.

The 30 women featured in this year’s calendar talk about their job responsibilities, early inspirations, advice they wish they’d received in their early years, and what advice they have for those considering a career in science, technology, engineering, and mathematics (STEM). They represent a wide variety of science and technology occupations, from university professors in the classroom and research laboratory to scientists working on telescopes in the Atacama Desert in Chile. 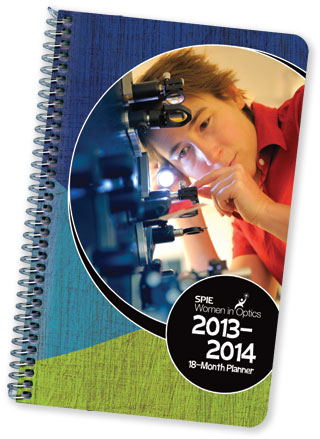 On the cover of the calendar is Sylvia Roke in her former lab at Max-Planck für Intelligente Systeme. For a copy of the SPIE Women in Optics calendar, email Pascale@spie.org.
STEM: The background music

An important focus of STEM education programs around the world is getting students, especially girls, actively engaged in science at an early age. Because of lingering misconceptions about the abilities of women to be successful in science and math, girls are often overlooked in such courses.

“Girls don’t have to wait until college to start a career” in optics or in another science field, says SPIE member Rose Soskind, an undergraduate at Rutgers University (USA). “They should start research when they are comfortable and should not be afraid to try new things. Becoming an SPIE student member during high school allowed me to gain valuable research skills, as well as meet and become friends with SPIE members and staff.”

Ivy Krystal Jones, a graduate student at Hampton University (USA) who was inspired by the Star Trek: The Next Generation television series, advises students to “ultimately embrace the STEM fields as the interdisciplinary background music of scientific discovery.”

Many of the women in the planner note that finding good advisers and mentors is important when starting out.

“As an undergrad, I was told that women who like physics should be high school teachers,” says Alison Peck, deputy project scientist at the Atacama Large Millimeter/submillimeter Array (Chile). “But I knew that I wanted a PhD and a career in research. The right mentors are out there. You just need to be willing to trust your instincts for a while until you find them.”

SPIE member Sarah Kendrew, an engineer at the Max-Planck-Institut für Astronomie (Germany), advises girls interested in STEM studies to forge ahead despite obstacles and not to expect special treatment.

“If this is what you want to do — just do it,” Kendrew says. “When you become aware of any gender disparity, resist the temptation to think of yourself as a minority or different in any way from your peers.

“Every person has strengths and weaknesses; learn what yours are and don’t let yourself be reduced to a stereotype.”

Most people deal with obstacles when starting out in their careers. A recurring theme among the stories in the SPIE Women in Optics calendar is the additional hindrance of gender stereotyping. Since these women have stood their ground and moved forward despite such obstacles, more doors have been opened for women in science.

The stories they share show that while the gender gap has narrowed, it has by no means closed.

When Helen Hall, associate director for program management at the Universities Space Research Association (USA), began her career as an engineer in 1984, there were very few women in the field of thermo-mechanical engineering and she was told that women were bad luck to workers underground.

“I had to work harder to earn their respect,” Hall says of her male co-workers. And she did. “I still get phone calls today from the underground miners finding out how I am doing,” she says.

SPIE Senior Member Clementina Timus, now retired, was a physicist at the National Institute for Lasers, Plasma and Radiation Physics (Romania). She spent much of her career in an environment that declared equality, but “I can’t say that during my career I never felt discrimination,” Timus says. “Sometimes I hid my tears.”

Women never have to feel inferior, Timus says. “They have to be themselves and be proud to be women. In my opinion, man or woman, we have to keep our identity and never try to be different.”

When Gillian Wright started at university, it was still considered unusual for girls to study math and physics. She doesn’t point to a specific event but felt the weight of “the cumulative effect of many small things.” Despite the social attitudes of the time, she maintained her determination to be a scientist and is now director of the U.K. Astronomy Technology Centre and European principal investigator for the James Webb Space Telescope MIRI instrument.

“The situation is different now,” Wright says. “There have been great improvements particularly in the last decade.”

Despite changes in attitude, one of the arguments still heard against women pursuing certain careers is the difficulty of handling that career along with the responsibilities of caring for a family.

“Avoid people who try to defeat you with the story that you cannot do a good job because you have a family, husband, kids, etc.,” says Anna Grazia Mignani, senior scientist at CNR – Istituto di Fisica Applicata “Nello Carrara” (Italy). “It is a deceitful story and simply not true.”

Network and then start breaking stuff

Another common thread in these stories is the importance of networking. Much of the advice found in the planner touches on learning from others – particularly those who have chosen a similar path.

In her advice to girls considering careers in science, SPIE member Anne-Sophie Poulin-Girard, a PhD student and lecturer at the Université Laval, Center for Optics, Photonics and Lasers (Canada), quotes Eleanor Roosevelt who said, “The future belongs to those who believe in the beauty of their dreams.”

Salay Stannard, sales manager and engineer with Joining Technologies (USA) is inspired by the words of Gayle Hagler, environmental engineer with the EPA. After winning a Presidential Early Career Award for Scientists and Engineers, Hagler was asked for her advice to girls interested in science.

“Go ahead and start breaking stuff!” was the answer, because that’s how Hagler got her start.

And while the women featured in the 2013-14 planner find inspiration in their mentors, colleagues, and students, most are inspired by science itself.

“I was first inspired by the magic of space exploration,” says Adela Ben-Yakar, a professor at the University of Texas at Austin, (USA). “I consider space to hold the secrets of our past and future and who we are and what we are made of.”

SPIE Senior Member Fatima Maria Mitsue Yasuoka, a researcher for Opto Eletrônica and the Physics Institute of São Carlos (Brazil) says, “I’m inspired by the fact that we can change the world with science.”

Fourteen of the 30 women featured in the SPIE Women in Optics 2013-14 planner are SPIE members.

SPIE member Michelle Xu of University of California, Berkeley (USA) will serve as moderator for the panel discussion, “What Works for You: A Mentoring Panel for Women in Science and Technology” at SPIE Photonics West 2013.

Open to all conference attendees, the roundtable discussion on 4 February in San Francisco will feature women pursuing diverse paths to balance career and family.

Roundtable sessions with one panelist per table leading the discussion will follow. This event seeks to build mentoring relationships for female graduate students and recent graduates in science, technology, engineering, and mathematics through interaction with those already establishing their careers.

Contact June@spie.org to reserve a seat at the roundtable discussion.

Have a question or comment about this article? Write to us at spieprofessional@spie.org.

To receive a print copy of SPIE Professional, the SPIE member magazine, become an SPIE member.