Bell at the master console of the da Vinci robot, which is used to perform teleoperative surgeries through incisions as small as a keyhole. Bell’s PULSE Lab was the first to integrate photoacoustic imaging with the da Vinci robot to demonstrate the benefits of photoacoustic image guidance in this minimally invasive surgical environment. Credit: Maryland Science Center.

Muyinatu Bell wants to make surgery safer. An assistant professor in the Department of Electrical and Computer Engineering at Johns Hopkins University and director of the Photoacoustic and Ultrasonic Systems Engineering (PULSE) Lab, Bell utilizes her cross-disciplinary training to maximum effect. Her work's potent combination of computer engineering, biomedical optics, and computer science is innovating photoacoustic imaging for better surgical tools which have a wealth of applications across surgery, cancer detection, and women's health. These efforts have also won her a slew of recognitions including an MIT Technology Review Top 35 Innovators under 35 honor, and, in 2019, an Outstanding Young Engineer Award from the Maryland Academy of Sciences and the Maryland Science Center. Earlier this year, she was an invited Hot Topics speaker at the BiOS conference during SPIE Photonics West.

"I had a particular interest in integrating photoacoustic and ultrasound imaging systems with robotics," says Bell who will be discussing her current research during the free SPIE.online webinar on 17 August, hosted by the Journal of Biomedical Optics. "I want to improve robotic surgery and to use robotics in new ways to enhance the type of imaging technology that we can provide. At the moment, we are developing novel signal-processing and beamforming techniques for both ultrasound and photoacoustic imaging, and we take those techniques and design novel prototypes — a specialized light-delivery system that attaches to surgical tools, for example — and we use these prototypes to improve image quality. We then integrate our innovations with commercially available ultrasound, laser, or robotic systems, creating a new system that's the first of its kind to address a clinical challenge. We are always developing our work with the end goal of impacting patient care."

Bell likens photoacoustic imaging to the interplay between lightning and thunder. "That concept of light and sound happens on a much smaller scale inside the human body where you transmit light to a structure of interest like a blood vessel: the blood vessel has a higher optical absorption than its surroundings so it absorbs that light, undergoes thermal expansion, and generates a sound wave that can be detected with conventional ultrasound technology. We can use that sound to make images of a range of different tissues or structures that have higher optical absorption than their surroundings."

Applications have already included optical-enhancing devices and guidance systems for use during spinal fusion surgery, hysterectomies, and the removal of pituitary tumors, as well as liver-related imaging. In the case of liver imaging, Bell notes, the technique highlights the blood vessels that you want to avoid: "Excessive bleeding in this area could lead to patient death." Another innovation encompasses optical guidance systems for catheters and biopsy needles, a novel approach that Bell believes may ultimately replace fluoroscopy which can be harmful due both to its ionizing radiation and lack of depth information. 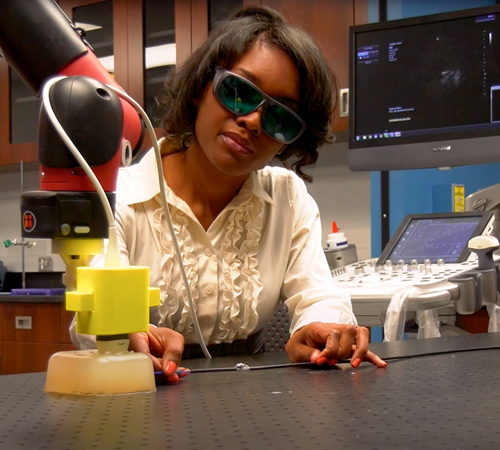 Bell in the PULSE Lab using their robotic visual servoing system that automatically finds and stays centered on a catheter, needle, or fiber tip. This system has the potential to rival fluoroscopy during cardiac catheterization procedures. Credit: Maryland Science Center.

Pituitary tumors are just one example of an anatomical case where the tumor is extremely close to major arteries, so close, in fact, that the likelihood of causing injury, especially for the novice surgeon or surgical residents, is quite concerning. Bell's team wants to avoid such cases by giving the surgeon the ability to see — and avoid — these anatomical features during surgery. "We've developed an adaptation to a surgical drill that's typically used when drilling sphenoid bone to remove a pituitary tumor through the endonasal transsphenoidal approach," says Bell. "It's minimally invasive, goes through the nose to remove the bone to access the tumor, and is surrounded by optical fibers. The goal is to enable the surgeon to see both the tool tip and critical anatomical structures that may be hidden by bone or other tissues in the same photoacoustic image. So the surgeon can see not only what's already available to him or her with this tool, but also see if the blood vessels may have shifted relative to the preoperative CT or MRI image, detect that shift, and update their knowledge of where the drilling of this bone might be made."

Bell's team can make their specialized light-delivery systems compatible with almost any surgical tool. In these cases, they're not making new surgical instruments, but enhancing those instruments with new imaging devices and imaging technologies such as the optical fibers surrounding a surgical drill or tool. "In order to avoid damage to whatever tissue might be in the path of the laser light, we need a nice, uniform light profile," Bell explains. "To achieve this, we use simulations to ensure that a continuous circular light pattern surrounds the tool, and to get this pattern we need to strike the right balance with the number of optical fibers used: not too few, not too many." That, she notes, is just one aspect of necessary optical engineering design considerations when attaching her light delivery systems to surgical tools.

Another recent innovation in Bell's PULSE Lab entails mapping what a surgeon might see to a sound, an actual request that came from Bell's surgeon collaborator. "What if the technology could be like the backup camera on my car," she asked Bell, "where if I'm getting close to a structure as I'm backing up I hear the sound beeping and I know something's wrong and off and I need to re-adjust?" Bell is currently exploring ways to map the signals indicating proximity to a major structure to an auditory input. "The surgeon can look at the surgical field and hear when he or she gets closer to that major structure that they want to avoid."

Bell will be sharing these and new insights — including her lab's latest reports on the eye as an acceptable acoustic window for transcranial photoacoustic imaging — during the JBO webinar on 17 August: register here to keep you finger on the biomedical optics pulse. 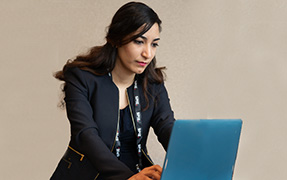 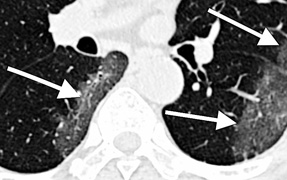