With a penchant for applied optics and for developing groundbreaking technologies, Elizabeth Hillman is determined to see things that nobody has seen before
15 October 2019
by Daneet Steffens
Events, Technology
SCAPE 2.0 imaging of a cleared mouse brain (Thy1-GFP, mCUBIC). The whole 8.5 x 9.5 x 0.4 mm volume was imaged in only 230 seconds. Colors in the image denote depth into the sample. The inset on the right shows a zoomed in view of the region indicated on the left. Credit: Kripa Patel, Venkatakaushik Voleti and Hillman Lab. Sample provided by Arun Narasimhan and Pavel Osten.

Elizabeth Hillman is perpetually in exploratory mode. The SPIE Fellow, chair of the SPIE Neurophotonics progam track, and recipient of the 2018 SPIE Biophotonics Technology Innovator Award had originally thought about becoming a doctor - until she saw an MRI scan of her own back and fell in love with biomedical imaging. Her latest innovation, Swept, Confocally-Aligned Planar Excitation (SCAPE) microscopy, can capture the complex 3D movements and activity of living things at record-breaking speeds.

"I'd always liked art, drawing, and making things - and I was really interested in medicine growing up," says the principal investigator at Columbia University's Zuckerman Institute. "But when I went to do medical work experience by shadowing a doctor, I walked into a room, saw blood, and I was like, ‘Oh, okay, no.' I didn't pass out, but I realized that I'm not the person who you want to have come in and sew your arm back on."

Around that time, Hillman injured her back doing gymnastics and went for an MRI scan. "They put this incredible image up on the wall, and I almost did pass out because it was amazing - it was beautiful but also revolting: inside me there was this disc bulging out in my back, poking onto my nerve, and the doctor said, ‘Oh, that's why your leg is numb.' I was blown away. I said, ‘Who? Who gets to build these machines?' and he said, ‘I think it's called Medical Physics.' I already loved physics and math, so I realized I could do physics and build things, but I could also contribute to medicine."

Mentorship from David Delpy, then a University College London professor, cemented her decision, and she completed her PhD in his department, working on a diffuse optics technique for imaging the brains of premature babies: "I took on that PhD because I passionately wanted to help prevent brain damage from asphyxia and poor brain oxygenation. It was also a wildly technical project involving big lasers, fiber optics, crazy electronics from high energy particle physics, and lots of math and computer science. Who couldn't love that?"

Role of the DyCE

As a researcher within a university, though, Hillman couldn't see a clear path toward translating her work into a product. When she was offered a job at a Boston startup company that was developing a non-invasive glucose monitor for diabetics using fluorescence and spectroscopy, she decided to move to the US and explore what it was like in industry. "It was really interesting," she says. "I learned about commercialization and the FDA and the startup culture, but I did miss the opportunities for teaching, mentoring, and more open-ended research."

Another mentor, David Boas, then at Massachusetts General Hospital (MGH), was successfully combining academic research with commercialization, and invited Hillman to join his lab as a post-doctoral fellow. "We began developing microscopes to try to study the brain in rodents and understand the relationship between neural activity and blood flow," Hillman explains. "I found it very attractive as a scientific question because I'd already studied many aspects of blood flow and metabolism, and it's really all about physics: energy, pipes, flow, dynamics and diffusion of oxygen. It's also an infrastructure kind of question that fits very well with an engineering approach."

While at MGH, in addition to developing Laminar Optical Tomography for high-speed 3D mapping of hemodynamics in the rat brain, Hillman filed a patent which became Dynamic Contrast Enhancement (DyCE). This technique for classifying tissues based on the way their signals change over time was licensed to PerkinElmer and incorporated into a wide range of commercial small animal molecular imaging systems. Thanks to Hillman's startup experience, she was also able to actively involve herself in its commercial development. 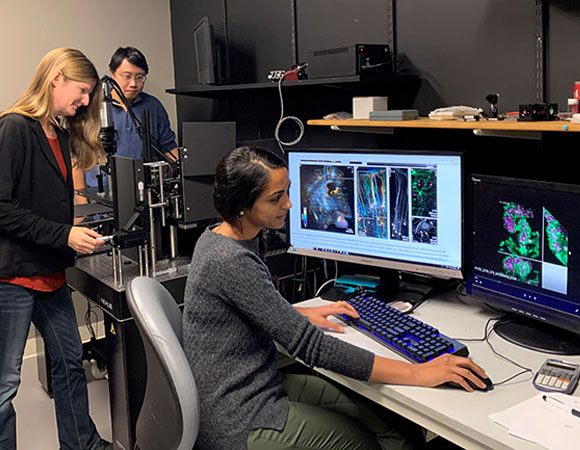 In 2006, Hillman moved to Columbia University, founding the Laboratory for Functional Optical Imaging. She is a professor of biomedical engineering at Columbia Engineering and a professor of radiology at Columbia's Vagelos College of Physicians and Surgeons. On arrival, she was immediately tasked with teaching a class focused on designing biomedical products: "I would sit with the students and have them identify a biomedical problem, and then research the heck out of it. We came up with a process to generate a wide range of innovative solutions, all the while thinking about who would use it, who would buy it, what would make the solution as disruptive and creative as possible. Drawing on my industry experiences was incredibly valuable."

Hillman committed, from the start, to creating a diverse research lab. Everyone, she believes, brings a different approach to problem-solving based on their various backgrounds and experiences. "Even me, for example, tinkering around as a kid: I used to make things all the time, little animals out of modeling clay, carving stuff out of wood, making miniscule sculptures out of solder. Sometimes, I'll be in the lab and somebody will be struggling with making something intricate, and I'll say, ‘Can I help?' And they'll ask, ‘How did you learn how to do this?' And I'll be like, ‘Oh, I used to make tiny hedgehogs out of wire.'"

She believes that diverse backgrounds and interdisciplinary training are key to solving today's most challenging problems: "We need to integrate ideas and draw people together," says Hillman. "That's where important and exciting discoveries come from."

The scope of SCAPE

In the group's latest paper, recently published in Nature Methods, Hillman and her team present what they term SCAPE 2.0, a more advanced version of their original SCAPE microscope with major improvements in terms of speed and resolution. Swept, Confocally-Aligned Planar Excitation microscopy is an approach to high-speed 3D imaging that can capture the complex 3D movements of living things, and thanks to calcium-sensitive fluorophores, analyze the activity of 1,000's of cells in real-time. SCAPE uses light-sheet illumination, making it gentle on living samples, but uses a single objective lens for both illumination and detection, making it capable of imaging a wider range of samples than conventional light-sheet systems. SCAPE's speed comes from the way it uses a scanning mirror to sweep the light sheet across the sample, and to de-scan the returning light to maintain a focused image on a stationary camera. Combining image planes, the system can image entire 3D volumes at video rates, capturing neuronal activity in cells throughout moving organisms.

In the Nature Methods paper, the team demonstrated that SCAPE 2.0 can image particularly challenging living samples that cannot be imaged with existing methods, including freely moving C. elegans worms. "Scientists study these worms because they are simple, they only have 302 neurons, yet they move, eat, and reproduce. The hope is that if we can understand how their nervous system works, we can extrapolate that up to much more complex brains," says Hillman. Despite their simplicity, until now, it has been a challenge to image these worms while they moved, with fine enough detail to track every neuron and analyze its firing patterns in the context of the animal's behavior. SCAPE 2.0 surpassed this speed limit, while also minimizing photodamage, capturing wild movies of the C. elegans dancing around in 3D. In addition, Hillman's team used SCAPE 2.0 to image the beating heart of baby zebrafish, an animal model that scientists use to understand development of the heart and the effects of genetic defects on heart function: "With the help of a new, intensified, high-speed camera, we were able to track single red blood cells as they flowed through the beating heart at over 300 volumes per second. We also explored the heart's conduction system by analyzing calcium signaling in the cells in the wall of the heart."

The team also demonstrated SCAPE 2.0's ability to image large-tissue samples in order to do structural imaging at high speeds, achieving new high-throughput imaging capabilities. "This was something that wasn't intended to be a primary driver application of SCAPE," notes Hillman. "But when we started to use it for imaging cleared tissues, fixed stained tissues, and expanded samples, we found that it was a really easy, convenient, quick way to image them in just a few minutes, compared to the hours needed to scan them using standard microscopes." 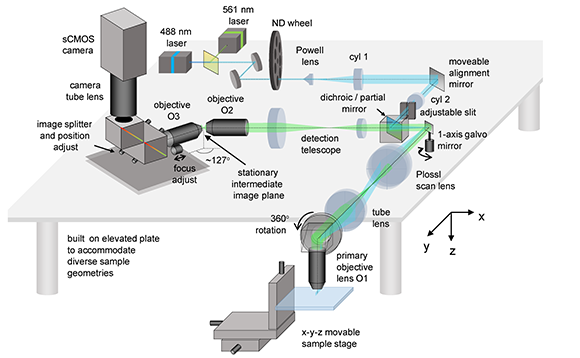 Schematic showing the layout of the SCAPE 2.0 microscope.

Early in the development of SCAPE, Hillman recognized its commercial potential and began reaching out to companies, ultimately licensing SCAPE's patents to Leica Microsystems. Hillman's team is continuing to develop new versions of SCAPE that extend its capabilities, while also working to help scientists build their own SCAPE systems and use the technique for their research. In one recent study, they worked with collaborators to image the responses of tens of thousands of sensory cells within the nose to different mixtures of odors. Their results showed that some odors can inhibit or enhance a cell's response to another odor, challenging long-held assumptions about how the brain decodes what we smell. "We think this process allows the brain to untangle more signals," says Hillman, "and might explain why some air fresheners are particularly good at masking other smells."

In another recent paper in Current Biology, Hillman worked with collaborator Professor Wesley Grueber at Columbia's Zuckerman Institute to apply SCAPE to studying crawling fruit fly larvae. Their work generated stunning videos that revealed how neurons along the tiny maggot's body wall sense its position as it inches around.

Hillman's team is also working on a version of SCAPE for medical use since they discovered that it could show the cellular structures of living organs within the body as an alternative to taking a biopsy. "It all began when I imaged my finger," says Hillman. "Imaging my tongue was a challenge, so we moved on to testing fresh tissue samples from mice and now humans, in collaboration with pathologists at Columbia. Clinicians are really excited about being able to use our system to get real-time, in vivo histology to guide surgery and to help preserve precious tissues such as nerves and brain."

Hillman's team has many other projects using light to study the brain and the way in which the brain regulates blood flow. Her videos encoding real-time brain activity as music have offered new insights into how the brain's ongoing activity relates to behavior and represent an exciting new way to think about big data visualization. Hillman acknowledges Douglas Adams' Dirk Gently's Holistic Detective Agency, a book that she read as a teenager, with that particular concept: "Yet another example of the way in which our own diverse experiences give us those crazy ideas that surprise people!"