The two inventions that bear his name, the Shack-Hartmann sensor and the Shack Cube interferometer, bear witness to his love of simple solutions
24 October 2019
Technology, Community

Professor Emeritus of Optical Sciences at University of Arizona's (UA) Optical Sciences Center (OSC), Shack's multiple talents and contributions to the field of optics are legendary. His name can be found many scientific publications, and his Shack-Hartmann Sensor and the Shack Cube Interferometer are "household words." But, for many, Shack's dedication to his students and the learning process is considered one of his greatest influences on the optics community.

Shack began his teaching career at OSC in the fall of 1965 — the center's academic program began operation that year with five faculty members, four graduate students, and a curriculum of seven courses. After an engineering career at Perkin-Elmer, Schack discovered his "real calling" at OSC — teaching. He encouraged students to be curious, to understand what was happening before their eyes, and not take anything for granted.

"Professor Shack was dedicated to teaching and to the success of his students, many of whom became leaders in the field," says Thomas L. Koch, dean of the James C. Wyant College of Optical Sciences at UA. "As one of the very first faculty members hired by Aden Meinel, he was instrumental in laying the foundations of what is now the Wyant College of Optical Sciences." 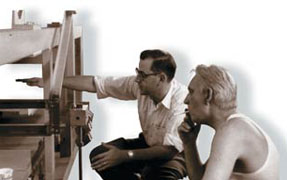 Roland Shack (left) and Kurt Opperman at Perkin-Elmer, working on the Baker-Nunn Satellite Tracking Telescope in the fall of 1957 when Sputnik became the first satellite in orbit.

An SPIE Fellow since 1984, Shack was awarded the SPIE Gold Medal in 2004. In honor of that award, Shack was interviewed by oemagazine, where he noted that “My enthusiasm has always been for simplicity in everything I do."

Tammy Orr of University of Arizona noted this pholisophy in her 2016 article Reflections: Roland V. Shack, "Throughout his career, Roland strived for one thing above all else — simplicity [in his actions] as a way of making a difference in the lives of others. [His inventions] bear witness to his love of simple solutions." Her article covers Shack’s early life growing up in Virginia, his early engineering career, which included at stint in the US Army Signal Corps during WWII, and his many adventures in academia at UA.

“Roland was my teacher, my mentor, and my friend — I miss him dearly,” says John Greivenkamp, professor of optical sciences at UA and President Elect of SPIE.  “He established an outstanding standard of excellence here at OSC, and we are all honored to be advancing the culture that he helped create."

Per request of the Shack family, memorial contributions may be made to the Roland V. Shack Graduate Student Scholarship in Optical Sciences.

A Telescope of Her Own
Technology
New Research Uses Physiological Cues to Distinguish Computer-Generated Faces from Human Ones
Press Releases, Publications