Jennifer Barton in the lab at BIO5, University of Arizona. Credit: Deanna Sanchez

To unwind, Jennifer Kehlet Barton likes to visit a small, remote observatory to do some astrophotography near the border with Mexico in the Patagonia Mountains, using a digital deep-space CMOS camera. "This is just fun. We are definitely amateurs," she says, musing on the Orion Nebula, the Pleiades, and such places that may well hatch a few new stars.

As a professional, Barton watches over the 300 or so stars, top faculty scientists, at the BIO5 Institute in central Tucson, AZ. And for her, that too could not be more fun. Since 2015, she has directed BIO5, a University of Arizona center for futuristic bioresearch on disease, hunger, and the environment, connecting five disciplines: agriculture, engineering, medicine, pharmacy, and science.

This year at Photonics West, she again blended work and play, beginning a term as new co-chair of SPIE's BiOS Symposium. Barton, who works on early cancer detection in her own BIO5 lab, says she looks forward to learning at a few PW industry sessions how to turn lab breakthroughs into successful market products. We asked Barton to take us on a conceptual tour of BIO5, pointing out hot topics from Photonics West that are being explored by these labs:

Medical imaging and microfabrication
Barton said the tour could start with Judy Su, more formally Tsu-Te, who does microfabrication of nanostructures. "She makes incredibly sensitive detectors of biomarkers in the body. One of her big areas is looking at Alzheimer's disease." Su's team is putting photonics technology into a biosensor that could become a useful diagnostic. It uses microtoroids with which a light can be directed to travel around a sample and find very small particles — in the attomolar range, at a concentration of ten to the minus eighteen moles per liter — of the protein biomarker being flowed past the sensor.

"She needs to fabricate these devices and then we need to test them, to make sure they are useful as a diagnostic. Su works with the physicians and brain scientists here in the BiO5 Institute to make sure her biophotonic device works for this medical problem." 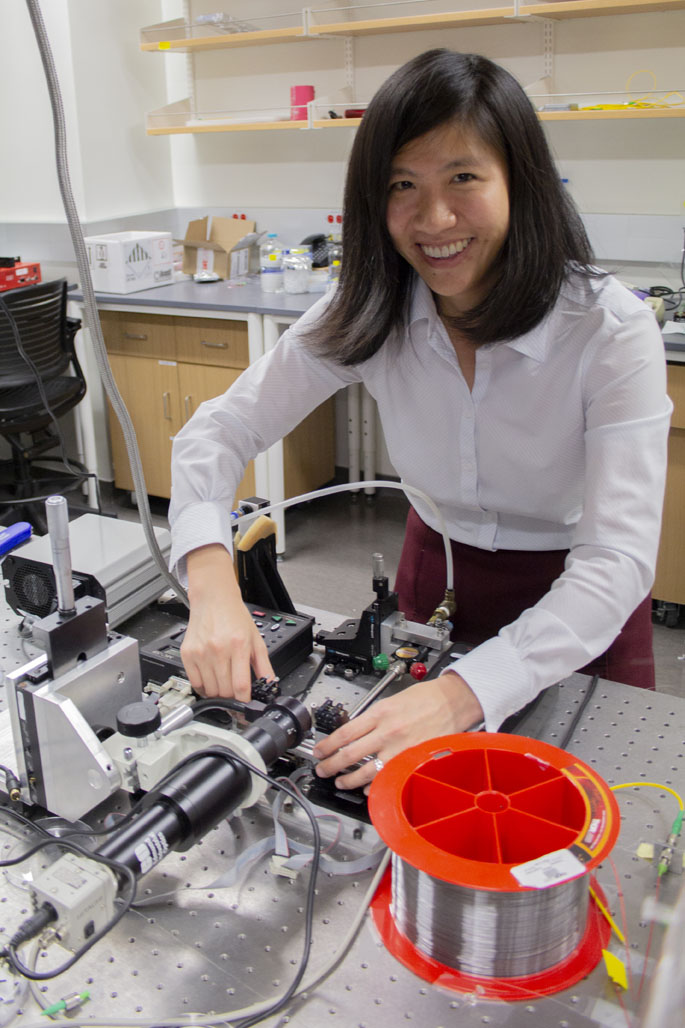 Judy Su of BIO5, whose group is putting photonics technology into a biosensor. Credit: BIO5, University of Arizona

Optomechanics
The work of Dongkyun Kang, known as D.K., is an ideal example of "where optics is going," Barton said. In the past, a visitor might see optical research tables full of lasers and mirrors and fancy tools of optomechanics. "And that's a fine place to start," Barton said, "but that's not going to be useful in the medical community. D.K. is taking, in his case, the confocal microscope and turning it into a portable handheld device that can go into rural areas, including rural Arizona, into developing countries, to diagnose cancers that affect a lot of people." Kang calls it "stopping cancer with a smart phone." The commercial confocal microscope is a large device that can cost upwards of $100,000. "And that's not something that most people can afford," she said. Kang is taking that capability and making sensors that are portable, highly sensitive, and at a cost goal of $5,000.

"This is all because of advances in photonics," Barton said. "You can use a small laser diode and implement it in the imaging and diagnostic devices that we are building. Today you can manufacture small optics at a reasonable price."

Translational imaging
We asked Barton to visit her own lab where work with spotting ovarian tumors is unfolding. She is developing what would be the first effective screening method for ovarian cancer. And that, she says, illustrates BIO5's ability to carry out fabrication and imaging using high-resolution optical techniques.

"If you want to look at cells or tissue microstructure, you can't image very deeply. You end up needing to build endoscopes," Barton said, "And I do that." Her microendoscopes provide nonsurgical techniques for looking into the body's tissues. The body has many natural orifices needing study, Barton said, "and the same advances in photonics and materials allow us to make tiny, flexible endoscopes that can go all kinds of places in a body, in a pretty minimally invasive manner."

Barton's work, funded by a Department of Defense Ovarian Cancer Research Program grant, has involved placing the devices in the fallopian tubes where they can do imaging below the surfaces to a depth of about a millimeter, several times the width of a human hair (up to 250 microns), with noninvasive optical coherence tomography, or OCT. In the past, technology could only take white light images on the surface.

"We are now going to create images as your eye would see if it could get in there," Barton said. In addition to OCT, Barton's wandlike microendoscope uses fluorescence imaging and multiphoton microscopy. Multiphoton microscopy is a "great example" of Barton's future goals. "People started out doing multiphoton microscopy with a titanium-sapphire laser (or Ti:sapphs, in the 200 nm bandwidth, for the wavelength of 700 to 900 nm). They were expensive, and still are. And when they first came out, you had to have a laser tech there always, to keep the laser running."

"Today, the market offers a shoebox size fiber laser that puts out the needed femtosecond pulses that you need for multiphoton microscopy. It's just a little turnkey shoebox with a fiber coming out that you can plug into your endoscopes." Her lab is now manufacturing endoscopes between 0.8 and 3 millimeters in diameter. "Which gets you into just about all the holes in the body," Barton said.

In the years ahead, her goals are to make such procedures simple enough to be done in an office. "My big themes," she says, "are tiny, portable, and inexpensive." Her own technology, which Barton said is still about seven years away from becoming a market product, will add capability to look for cancer below a surface with OCT, and to look at cell functions and metabolism with fluorescence, and to look at cell structure with microscopy. "We are adding a great deal of extra capability to what the medical community has had in the past." 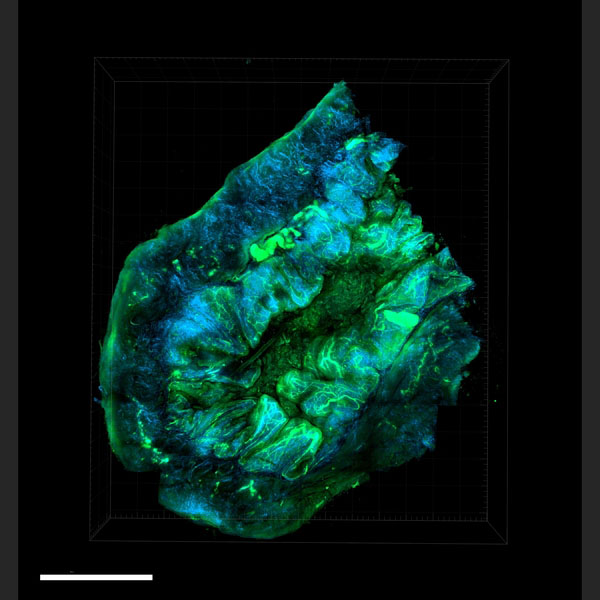 Microscopy
BIO5 is responding to stepped up market demand for improved contrast agents for human cells.

"If you wanted to have a contrast agent that targeted, say, cancerous cells, there's nothing approved right now," Barton said.

"A lot of FDA approved drugs happen to fluoresce and the drugs are highly targeted," Barton said, "and BIO5 is working on using microdoses of an approved drug, ones that have no therapeutic effect, as a contrast agent."

Because skin cancer is a particularly big deal in southern Arizona, BIO5 has a strong skin cancer-imaging program. Its labs are looking at how to use tissue optics to diagnose skin cancer, which often involves taking a biopsy. "How can you diagnose skin cancer without having to take a biopsy?" Barton said. "Melanoma of course is the killer, but how do we figure out the hallmarks of whether tissue is benign vs. a melanoma?" BIO5 also studies how to treat the cancers with photodynamic therapy. Work done by Clara Curiel, a dermatology professor, centers on diagnosis and treatment for squamous cells and basal cells, which represent a huge public health cost burden in Arizona and Australia.

Optogenetics
"If you do optogenetics, you need some way of delivering the light to the optogenetically encoded cells," Barton said. A BIO5 biomedical scientist studies just that. He's Philipp Gutruf, who has invented soft miniature tools, without batteries or wires, which use oxide based stretchable sensors and photonics.

"You often see pictures of experiments with rats or mice with this big thing coming out of their head, tethered to a cable that goes back to the laser," Barton said. "That's not very realistic. You don't get normal behavior. How can we make microelectronics that harvest the body's own motion for power? Or use very low power LEDs?"

"That's another whole area where BIO5 is going," Barton said. Overall, BIO5's 180,000 square foot Keating Bioresearch Building, which opened in 2006, houses some 40 PI's and labs, and its new 150,000 square foot, $107 million Bioscience Research Laboratories, which opened last year, houses about 50 PI's and labs with nearly 400 researchers, including about seven grad students per lab.

Business focus in 2020
This year, Photonics West will have an expanded entrepreneurship track. "They are doing a really good job," Barton said, "of bringing the medical device industry together with investigators like myself who are developing new devices, and talking about how you commercialize, how you define your markets, and get FDA approval."

"What I'm most excited about is that this whole series on industry and entrepreneurship basically goes all day. It's almost a parallel track to the scientific sessions," Barton said. "I need to split myself into thirds, so one third can go to the industry and entrepreneurship track, so I can learn how to take my devices and turn them into a successful product, which is something we don't learn in school.

"Then I need another clone of me to spend all day long in the technical sessions," Barton said. She would start with the new conference called "Biophotonics and Exercise Science: Sports Medicine, Health Monitoring Technologies and Wearables."

Overall, for the decade ahead Barton predicts "an explosion of new technologies coming on the market. I think we are finally there in terms of products that are truly useful, can truly help patients, and are inexpensive enough to have good market penetration. That's the difference between the $100,000 device for confocal microscopy and the $5,000 device."

This article originally appeared in the 2020 Photonics West Show Daily.