A presentation from SPIE Photonics West 2018.

Luo leads a new facility called the HUST-Suzhou Institute for Brainsmatics, which has a 5-year budget of 450 million yuan (US$67 million) and employs some 120 scientists and technicians. Luo, who calls himself a "brainsmatician," also built the institute's high-speed brain-imaging systems, which visualize brain-wide networks using an integrated, systematic approach to measuring, analyzing, managing, and displaying whole brain data.

Luo shows several examples of the high-resolution detail of neural circuits and single neurons that can be obtained using MOST. This system can also be used to image the brain's vascular network, and his group just reported on a whole brain atlas of certain regions of the brain.

"With our approach, we can achieve brain-wide registration of multiple parameters with high spatial resolution," he said. "We have bridged the gap between electron microscopy and MRI for brain imaging and reconstruction." 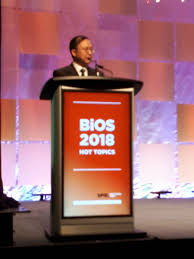 Qingming Luo is director of the Britton Chance Center for Biomedical Photonics at Huazhong University of Science and Technology in Wuhan, China. He is also Executive Deputy Director of the Wuhan National Laboratory for Optoelectronics.

Luo's research interests have focused on Biomedical Photonics and Bioinformatics. He has carried out studies on optical molecular imaging and tissue optical imaging based on tissue structure and function.