A presentation on 3D printing and bioprinting with multiphoton lithography from SPIE Photonics West 2018.

In a Photonics West LASE presentation, Aleksandr Ovsianikov, an associate professor at the Vienna University of Technology (TU Wien) discussed his group's development of materials and additive manufacturing technologies for biomedical applications.

A particular focus their current research is the development high-resolution 3D printing and bioprinting by means of multiphoton lithography (MPL), including biocompatible/biodegradable photopolymers, scaffold-based tissue engineering, and three-dimensional tissue models.

Ovsianikov opened his talk with images of a recent effort to demonstrate the capabilities of MPL. Using this method, they produced a tiny castle (230 µm x 250 µm x 360 µm) directly on a tip of a pencil.

Ovsianikov and his team use ultrafast lasers to build three-dimensional structures for tissue engineering experiments. The laser pulses sculpt the structure, in a way. This is in contrast to conventional 3-D printing, which lays the structure from the ground up, Ovsianikov explained in his presentation, Biomedical applications of multiphoton processing. For example, the laser pulses transform a particular water-soluble material to water-insoluble. They use the laser to carve the structure they want and then wash away the water-soluble frame. 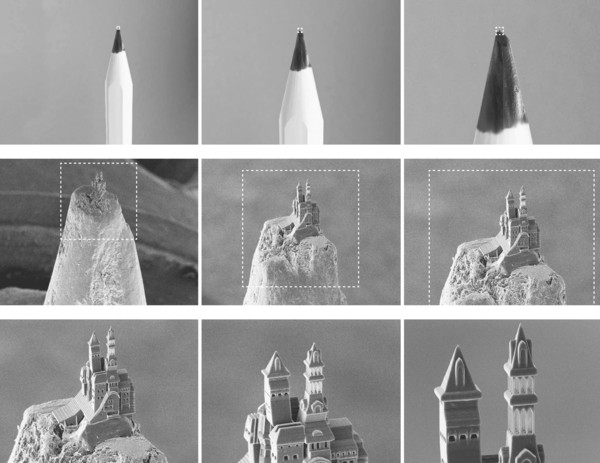 From the cover of Multiphoton Lithography: Techniques, Materials, and Applications_ Wiley-VCH

"We're working on additive manufacturing of different technologies that are based on photopolymerization," said Ovsianikov. These technologies include stereolithography, digital light processing (DLP), and two-photon polymerization (2PP).

Ovsianikov went on to show how his group has been using 2PP to create scaffolds for tissue engineering by building tissues inside these structures. First, they insert cells into the scaffolding. The cells densely cluster together and begin to form a tissue. Then, to make the tissue larger, they can snap the structures together like Legos.

Their design marries two competing strategies for tissue engineering. Existing scaffolds provide a supportive structure for cells to collect, but the tissue can never grow beyond the scaffold. Some researchers eschew scaffolds, but then the cells lack a supportive structure. "We take the best of both worlds," says Ovsianikov. Both groups take advantage of the fast, intense pulses of ultrafast lasers.

"A scaffold is a three-dimensional structure," Ovsianikov explained. "The whole idea is to create the supportive structure scaffold for the cells, which are basically the patient's own cells, they are isolated, multiplied, and put in the scaffold."

Using what he called the "third strategy in tissue engineering," Ovsianikov explained that individual spheroids are formed within microscaffolds using anti-adhesive wells and complete fusion of cell-containing microscaffolds are possible within several hours.

Ovsianikov concluded by stating that multiphoton processing is a versatile technology platform. It offers high spatial resolution due to nonlinear absorption, enabling fabrication of microscaffolds (the synergetic strategy in tissue engineering); transparent cell-structure matrices are automatically compatible with optical analysis tools well established in biology; and there's a rapidly expanding portfolio of processing biomaterials and the possibility to process materials in the presence of cells.

Beyond the medical realm, ultrafast lasers have wide-ranging applications in manufacturing and materials science as evidenced by the numerous and diverse presentations at Photonics West.

Lasers Versus Drones
Technology
The Sky’s the Limit for Autonomy and Artificial Intelligence
Events, Technology