Hands off the wheel

Although DARPA’s 2004 Grand Challenge is widely credited as the first serious foray into autonomous vehicles, the town of Lincoln, Nebraska, remembers the efforts of Leland Hancock to create a driverless system as early as 1957
01 March 2021
By Nancy Hicks
Technology
A 1957 Chevy was part of a test drive of a driverless car on US 77. The car was driven with its windshield blacked out and held a straight course following signals transmitted from a guide wire laid under the pavement, which were interpreted by a radio meter inside the car. Image credit: Lincoln Journal Star

Over sixty years ago, a 1957 chevy moved slowly down US 77 near the Nebraska 2 intersection guided by wire coils buried in the highway.

It was the first real highway demonstration of a system its inventor and promoters believed would allow cars to be guided by signals from electronic wiring buried in the highway, rather than by human drivers. Promoters hoped the experiment would usher in an era of "electronic chauffeurs," which would eliminate accidents caused by driver drowsiness or carelessness.

The experiment took place because of the persistence of one man, a state traffic engineer, Leland Hancock.

This was decades before Google and Tesla began experimenting with driverless cars, and long before Lincoln, Nebraska, started pursuing its own driverless downtown shuttle service. It was the same year the Nebraska Department of Roads and Irrigation dropped "irrigation" from its name.

For four years Hancock wrote letters. He convinced researchers with the Radio Corporation of America to cooperate. He got money and permission to lay coils at the intersection of US 77 and Nebraska 2 as it was built. He located a car.

Hancock had the backing of his boss, State Engineer L. N. Ress. But Hancock, who became the unofficial electronic traffic control engineer for the state, did most of the work, as evidenced by several boxes of letters he donated to the Nebraska History Museum. 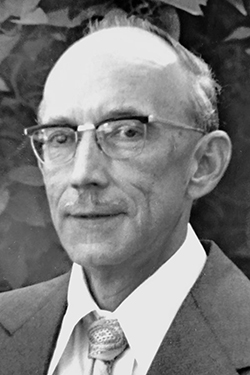 Hancock was inspired by a story in an August 1953 edition of Collier's, a national magazine, about research by Dr. Vladimir K. Zworykin, who is credited with perfecting the first television camera tube.

"I was greatly interested to read your recent article in Collier's concerning electronic automobile control. In connection with my work here, I have often theorized on the subject of automatic drive as it would pertain to traffic operations," Hancock wrote in his first letter to Zworykin. "If we had something tangible to work with, this department might be progressive enough to at least lay a few miles of actual roadway experimentally."

In September 1954, an initial test installation was made in Cass County, on US 73-75, where coils in the highway were hooked up to a traffic counter and proved "more accurate than the present counters," according to a Lincoln Journal Star news story.

Two years later, coils were placed in the pavement as the state constructed the intersection of US 77 and Nebraska 2, which was then on the outskirts of Lincoln.

Eighty-three people, including highway officials from across the nation and from the Bureau of Public Roads, plus reporters and other onlookers, watched the test on 10 October 1957.

RCA engineers had installed a pair of small coils on the bumper and a small meter in the cab of a car. A member of the RCA team drove the car with his windshield blacked out, holding a straight course by means of signals transmitted to his meter from a guide wire laid under the pavement. When he got too close to the car ahead, a bell sounded and a light flashed on. When he dropped back the signals stopped. He held his course by observing the swinging needle of the meter.

The system was described as resembling the block signals and control systems used on railroads. It demonstrated how vehicles might ultimately be controlled by radio signals from an electronic wiring system buried in the highway. A system of flashing lights by the side of the road, which were set off when cars passed over the coils in the road, would also be able to warn drivers of approaching cars, providing safety in fog or poor visibility.

According to newspaper stories, the system cost the state very little, about $500, mostly for the electrical wire and installation.

Hancock and the researchers hoped the test would create interest elsewhere and other states would cooperate in setting up a more comprehensive and widespread autonomous vehicle program. That did not happen. And letters between researchers and Hancock indicate their frustration.

In a letter dated 2 June 1958, RCA researcher L. E. Flory wrote, "... definite action is being prevented by the rapidly expanding tangle of administrative troubles on the national scale that seem to be occurring."

Hancock, described as the "spark plug" for this test project, worked for the state's Department of Roads from January 1946 to December 1981. He died in 2006, but his donated papers-including carbon copies of every typed letter-tell the story of this early attempt to create a driverless car system.

Originally published in 2017 and reprinted with permission of Lincoln Journal Star.