Richard Smalley discovered the genius of Nature in the molecule C60
01 July 2020
By Jeff Hecht
Technology
Richard Smalley (second from left) and Robert Curl (top), along with the rest the Carbon 60 team, posing with two module buckyballs, 1985. Credit: Rice University

Little things can have a complex parentage. Richard Feynman famously proposed the concept of nanotechnology - but not the term - in a 1959 talk to the American Physical Society titled "Plenty of Room at the Bottom," but it was largely forgotten for many years. Norio Taniguchi of Tokyo University of Science coined the word nanotechnology in 1974 to describe semiconductor devices on a scale we now call microelectronics. In the 1980s, Eric Drexler became a visionary prophet of molecular nanotechnology, and outlined how it might work. Richard Smalley became a nanotechnology luminary by zapping carbon with laser pulses to make the remarkable spherical molecule carbon-60, buckminsterfullerene, and thus made nanotechnology real.

Born 6 June 1943, Smalley grew up in Kansas City, Missouri, as the youngest of four children. His father built things with him in their basement shop and his mother taught him about science. His connection with chemistry came from his maternal aunt, Sara Jane Rhoads, one of the first women in the US to become a full professor of chemistry, at the University of Wyoming. Smalley spent four years as an industrial chemist after earning an undergraduate degree, then returned to school to earn a doctorate in chemistry at Princeton. As a postdoc at the University of Chicago in the mid-1970s, he got in on the ground floor of dye-laser spectroscopy and made important contributions.

As a chemistry professor at Rice University, Smalley used supersonic jets to cool large aromatic molecules to extremely cold temperatures, so he could examine their spectra in unprecedented detail with a high-power pulsed laser he had developed. Then he found line narrowing at low temperatures in uranium molecules, which looked promising for uranium isotope enrichment, but later the Three Mile Island reactor accident cooled interest in nuclear power.

His next project was zapping chemical elements with laser pulses to heat them to thousands of degrees, letting them cool to form atomic clusters, and ionizing them with another laser for analysis in a mass spectrometer. Working with Robert F. Curl, another Rice chemist, he was doing solid science on the physics of semiconductors and metals when Harold Kroto came to them with an astrophysical question.

A chemist at the University of Sussex, Kroto thought that zapping carbon with the Rice laser system could help him figure out if long-chain carbon molecules were forming in red giant stars. After some persuasion by Kroto, Smalley and Curl finally agreed to work with him. Kroto arrived at Rice on 1 September 1985, and soon afterwards their experiments produced the long carbon molecules Kroto sought.

They might have stopped there if the students running the tests, James Heath and Sean O'Brien, had not noticed the mass spectrometer was collecting something else-a surprising number of molecules containing 60 carbon atoms. The stuff seemed stable, but what was it? The professors suspected hexagonal sheets of graphite had formed the molecules, but they could not make C60 molecules from hexagons alone.

One day Kroto mentioned he had built a star dome for his children from pentagons as well as hexagons, but he did not remember how. That night, Smalley cut paper hexagons and pentagons and tried taping them together. He assembled 12 pentagons and 20 hexagons into a 60-corner structure that revealed the C60 molecules were the same shape as professional soccer balls. The shape also resembled the geodesic dome invented by Buckminster Fuller, so they named the molecule buckminsterfullerene. No one had expected carbon atoms to assemble themselves into anything so elegant.

The Rice experiments also revealed a second surprise: other atoms could be trapped inside these "buckyballs." The first was the rare earth element lanthanum, and many others followed, in addition to small molecules like water and methane. These "carbon cages" soon found applications in chemical research, materials science, and nanotechnology. 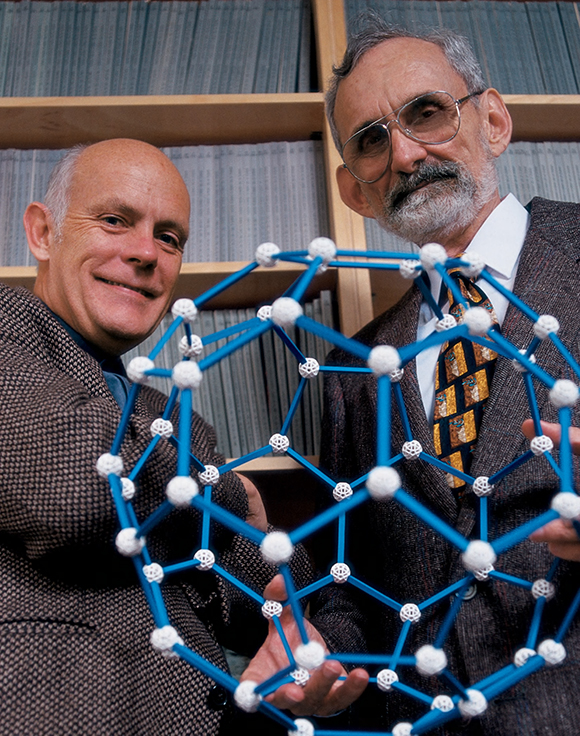 Another big advance came in 1993 when two separate groups discovered that a single layer of carbon atoms could roll into a single-walled nanotube roughly a nanometer wide. Such nanotubes have exceptional optical, electrical, thermal, and mechanical properties that quickly gathered intense interest. Although optical applications remain immature, nanotubes have unusual absorption, fluorescence, and Raman properties that depend strongly on their orientation relative to light. Their ratio of length to diameter can exceed 100 million to one. They also offer exceptionally high thermal conductivity, and electrically can act as metals or semiconductors.

The potentially tremendous mechanical strength of nanotubes along their length excited Smalley. He thought they might someday provide the extreme strength needed for space elevators proposed to haul objects from the ground up to satellites in geosynchronous orbit. Smalley corresponded with futurist and science fiction writer Arthur C. Clarke, whose novel The Fountains of Paradise popularized space elevators. Nanotubes have a low density of about 1.4 grams per cubic centimeter, which today gives them nearly 3,000 times the specific strength of high-carbon steel-an impressive achievement, but not yet strong enough to build a space elevator.

Smalley became widely recognized as a visionary and leader not just in fullerenes, but also in nanotechnology in general. As a chemist, he saw nanotechnology as dependent on chemistry, and doubted the feasibility of the biomolecular machines Drexler had proposed earlier. That launched a lengthy debate between the two.

The scientific establishment in 1996 honored Smalley, Curl, and Kroto with the 1996 Nobel Prize in Chemistry "for their discovery of fullerenes." In Smalley's acceptance speech, he said, "Carbon has wired within it, as part of its birthright ever since the beginning of this universe, the genius for spontaneously assembling into fullerenes." His speech concluded, "While it is fun to think about the wonderful role of serendipity in the story, one should also spend a bit of time comprehending the inevitability of the discovery as well. The only character of true genius in the story is carbon. Fullerenes are made wherever carbon condenses. It just took us a little while to find out."

Much more was yet to come. Electron microscopy had recorded single-layer sheets of graphene in 1962, but Andre Geim and Konstantin Novoselov rediscovered, isolated, and described them in 2004. That earned them the 2010 Nobel Prize in Physics.

Smalley died in 2005, too early to see that award and the continuing interest in both carbon nanostructures and new types of nanotechnology. The cutting edge in silicon integrated circuits has reached the nanometer scale, thanks to shorter wavelength light sources and refinements in chemistry.

Nanotechnology has brought us quantum dots, adhesives, paints, zinc-oxide sunscreens, and other nanomaterials now in industrial use.

People came up with the applications, but as Smalley observed, the true genius in the story is Nature.