If you gaze upward on a clear night, it won't be long before you see the blinking lights of a passing satellite. Such a sight would have been rare a couple decades ago, but today nearly 3,000 active satellites orbit Earth, and many more spacecraft explore the solar system and beyond. In five years, there could be as many as 1,000 satellite launches annually.

Outer space is no longer a lonely frontier. This bustling, futuristic skyscape provides us with a global communications platform, observational data about our planet, and even mysteries deep in space. However, the way we communicate with this ever-growing fleet is far from futuristic. In fact, the increasing amount of data streaming through space is leading to an information traffic jam.

Since the first satellites were launched into space, scientists have used radio frequencies to communicate with their space voyagers. Radio frequencies have the advantage of being impervious to most weather conditions, and their long wavelengths make for a wide beam that's easy to receive. But radio frequencies are limited and increasingly overused, which makes for slow data rates-on the order of early internet dial-up speeds.

Even 40 years ago, scientists realized that there was a better option: lasers. With wavelengths 10,000 times shorter, lasers have the potential to improve data transfer rates by four orders of magnitude while simultaneously using less power. But back then, laser technology didn't have the durability and power capabilities to operate from space, so the technology largely was shelved.

Now, decades on, the technology is coming to fruition—and not a moment too soon. A booming population of spacecraft equipped with increasingly high-resolution instruments is pushing space communications to its bandwidth limit. Interplanetary communications have increased by eight orders of magnitude since the 1960s and deep space communications are expected to increase tenfold each of the next three decades.

"Optical communication is going to be revolutionary," says Scott Hamilton, researcher and leader of the Optical Communications Technology group at MIT Lincoln Lab. "It's going to allow for things to be done that really haven't been done before."

Optical communications may revolutionize the space age, but first it must overcome the final remaining hurdles.

Cloudy, with a chance of laser beams

Any message transmitted from the moon or beyond by laser will reach its biggest hurdle once it reaches Earth's atmosphere. Turbulence in atmospheric layers can distort signals, but researchers have developed techniques to combat this issue. However, they haven't yet been able to overcome the opacity of clouds.

Unlike radio frequencies, which travel freely through clouds, optical communications are entirely cut off as soon as a cloud rolls in. To avoid losing a signal during stormy weather, more ground stations could be built in the hopes that one will have a clear line of sight clear if the others are blanketed. But with limited investment and high costs, it's not yet feasible to create such a widespread network. So instead, researchers are working on developing alternative solutions.

Jean-Pierre Wolf is one of those researchers. Wolf is a physicist at the University of Geneva who is developing a laser system that could clear tiny pathways through clouds. Someday, this could allow for laser communications signals to be sent even during cloudy weather.

At first, Wolf and his team tried creating a shockwave by ionizing the water droplets, but more recently they used a trick that allows the laser beam to rotate the droplets out of the way. This specially designed laser system flashes thousands of times per second and uses ten times less energy than is required for ionizing a pathway. And theoretically, it's feasible over long distances. 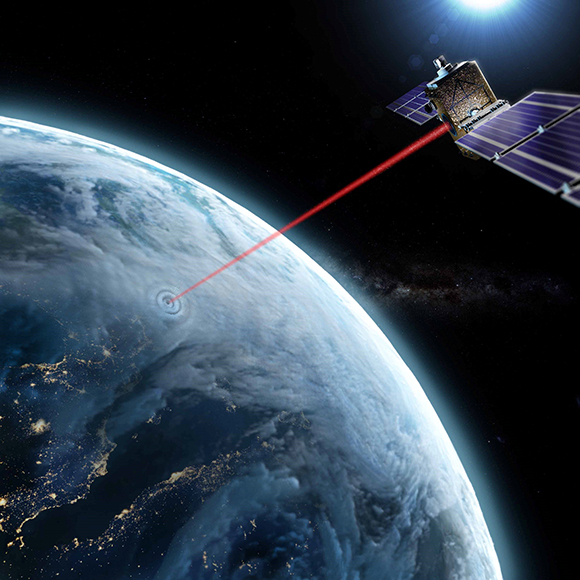 Artist's rendering of the laser "drilling machine" that clears a pathway in the clouds to open a channel for laser communications. Credit: X. Ravinet/University of Geneva

"This method, it's really a drilling machine," Wolf said of the work. "It clears the pathway in the clouds, creating a channel so that you can transmit telecom data."

The laser operates at a frequency of one micrometer, which allows for no disruption to the data transmission that is standardized at 1.5 micrometers. Tests have also shown the heated channel doesn't disrupt the transmission signal. A small no-fly zone will have to be erected over ground stations using this method, but such areas are not unprecedented.

So far, demonstrations of this technique have only been achieved in laboratory settings over a distance of half a meter. While the initial results are promising, the technology is a long way off from being implemented at ground stations, which would require channels hundreds of meters long. While interested parties are tracking the advancements, it's not yet considered a viable option in the near future. For now, laser communications will have to rely on a growing network of ground stations.

The chicken and the egg

Laser communications suffers from one of the same issues electric cars have faced—lack of infrastructure. For radio communications, ground stations have been developed through international collaborations around the world. NASA's Deep Space Network uses multiple facilities that provide continuous worldwide coverage. But since optical beams are narrower, they require many more ground stations to provide ongoing coverage, even in good weather. Since optical is much more weather dependent than radio, new ground stations have been placed in clear sky locations, such as a mountaintop in Hawaii and the deserts of New Mexico. NASA has developed a few of these ground stations across North America, and European Space Agency (ESA) is working to construct more in Europe with industry collaboration, but costs to build and maintain such stations are high.

"There was always a problem, what we call the chicken and egg problem. Nobody wants to fly optical terminals because there's no ground infrastructure," said Klaus-Jüergen Schulz, head of the ground station engineering division at ESA's European Space Operations Center. "So we are trying to break this [cycle], and in a year from now we will have our first network of optical terminals."

Even without a dedicated network, ESA is using lasers in space. In 2014, ESA demonstrated the first gigabit-speed laser communications with the European Data Relay System, or EDRS.

EDRS came on the heels of two NASA missions in 2013. Early in the year, a signature smile, albeit a little fuzzy, made an appearance in an unusual place. NASA sent the Mona Lisa on a 240,000-mile journey to the Moon using a laser. The digital image was the Lisa's first appearance in space, but it was also marked by a more notable first—the first use of laser communications at interplanetary distances. Only months later, another lunar mission used the Lunar Laser Communications Demonstration to showcase much more powerful two-way laser communications, at record-breaking speeds of 622 megabits per second with centimeter-precision ranging to the spacecraft.

Today, EDRS remains the only real operational use of optical communications in space, although its connection to Earth is purely conducted via radio frequencies. EDRS uses two geostationary satellites to provide near real-time communications for ESA's Earth science fleet of low-Earth orbit satellites using optical frequencies. Previously, the low-Earth orbit satellites could only send information down every ninety minutes as they passed over a ground station in Svalbard. Now, the observational satellites can transmit their data to EDRS with optical wavelengths, who then in turn can downlink them to Earth at near-real-time speeds using radio wavelengths. This allows for ongoing monitoring of activity and emergency situations on Earth, like checking transoceanic ships for oil leaks.

The future is optical

While consistent transmission is the largest remaining barrier to optical communications in space, more technology development is necessary for its usage to become widespread. Costs are still high and the scientific community as a whole is not yet won over. But things are changing rapidly.

"As [optical communications] was starting up, it was very expensive," said Betsy Park, a project manager at NASA's Goddard Space Flight Center who is working to develop optical communications for the agency. "When I started with it, there weren't that many vendors that were interested in working on it. And now, more and more of them actually have finished products that they're getting ready to put on the market."

Indeed, an increasing number of businesses from small start-ups to multinational corporations are getting into the game. Both ESA and NASA work with industry partners, and such collaboration is expected to make laser technologies more reliable and reproducible, ultimately driving down prices. Already many companies are seeing the potential in upgrading to optical communications in space.

Perhaps the most notable of upcoming optical communications endeavours is the private company SpaceX's Starlink. This program has been met with concern from astronomers who warn of its threat of light pollution, but it has also garnered significant interest over its goal of providing universal access to low-latency internet with bandwidths surpassing a gigabit. Currently, some 700 satellites in low-Earth orbit have demonstrated 100 megabits per second of bandwidth. Ultimately, they may be succeeded by thousands more, all interconnected by laser links, which would provide unrivalled low latency.

Involvement of industry will ultimately feed back into improving laser communications for deep space use, as well as helping to get the scientific community fully onboard with laser communications. Currently, the technology is seen by some as too new for standard use.

"Right now [scientists] have to compress their data, and they have to manipulate their data, because they can't ever bring it all back," Park said. "When they see how much they can bring back [with laser communications] they're going to want this. And then they're not going to take no for an answer." 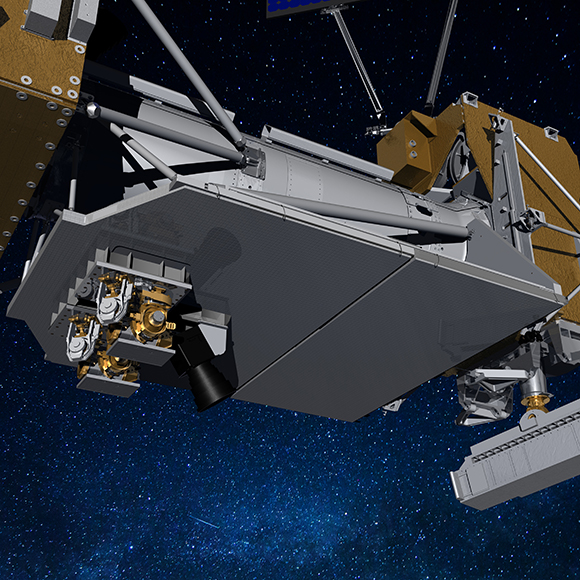 Further down the line, the Orion Artemis II Optical Communications System, which is currently in production, will allow for high-definition video calls on NASA's next crewed mission to the Moon planned for launch in 2023. For deep space communications, NASA's Psyche mission aims to launch in 2022 to test distance communications as the spacecraft travels hundreds of millions of miles to the giant metal asteroid 16 Psyche. While optical communications at these interplanetary distances are possible, truly distant missions will still require further engineering.

"With radio frequencies we've figured out how to build mesh, very lightweight, big antennas that fold out in space," Hamilton said. "Optically we're nowhere near anything like that, so we needed to do some work in that area."

In the long run, laser systems will undoubtedly change space communications for the better. But those nostalgic for the olden days of dial-up speeds, there's no need to worry about radio communications disappearing.

"I think we're going to see more and more optical in the future," Hamilton said. "But I suspect because of the pros and cons of each, that radio frequencies will always have a place in communications architecture."

Mara Johnson-Groh is a freelance science writer and photographer who writes about everything under the Sun, and even things beyond it.