Robert Hall and the Diode Laser

Speculation about the feasibility of semiconductor lasers started even before Theodore Maiman demonstrated the ruby laser in May 1960. Yet, Robert N. Hall doubted it was possible. He had been working on semiconductors at the General Electric Research Laboratory in Schenectady, New York, since shortly after the invention of the transistor, so he was well qualified to list several likely showstoppers. At the top of the list was the pitifully tiny fraction of electrical energy released as light when current carriers recombined in a semiconductor.

However, an unexpected breakthrough at the MIT Lincoln Laboratory in Massachusetts changed his mind. Robert Rediker and Ted Quist were studying why the electrical properties of gallium-arsenide diodes with impurities alloyed into them differed from those with impurities diffused into them. To find out, they compared the emission efficiency of the two types of diodes when cooled to the same temperature as liquid nitrogen (77 K). Spectroscopist Bob Keyes found that more than 85 percent of the current carriers recombining at the junction of a diffused diode emitted light, but only a tiny fraction of the recombinations emitted light in the alloyed diodes.

Rediker reported the dramatic difference on 9 July 1962 at the Solid-State Device Research Conference in Durham, New Hampshire. Hall attended the meeting, and he was impressed by both the Lincoln Lab result and a report by Jacques Pankove of RCA, noting that the emission efficiency also increased with the current density in the semiconductor. Previously electroluminescence from semiconductors had been around 0.01% efficient, but the new results were close to 100%. "That really shook me up," Hall said in a 1985 interview. "That was the lightbulb turning on. If things are really this efficient, what can you do with it?"

The train home to Schenectady gave Hall a few hours to think through the implications of high efficiency and high power density. His rough calculations showed that they might make a laser possible after all. He theorized that passing a strong current through a semiconductor junction inside a Fabry-Perot resonant cavity could produce coherent light oscillating in a single mode-in other words, a laser. Having built his own telescope as an amateur astronomer, he envisioned making the resonator by cutting the semiconductor, then lapping and polishing the opposite faces of the crystal to make mirrors.

Founded in 1900 by Thomas Edison, the GE lab was an industrial powerhouse of innovation with an informal structure that allowed its researchers move between projects. Hall talked around the lab and found several others interested in making a diode laser. Then he told his boss, Roy Apker, that a little group working half time "could probably find out if the idea was good for anything in a few months." Apker gave them the go-ahead.

Light emission in semiconductors was a new direction for GE, but Hall's team had relevant experience. Ted Soltys had made tunnel diodes from gallium arsenide, so he made the gallium arsenide junctions for their experiments. Dick Carlson had experience in preparing materials. Electronics specialist Gunther Fenner set up equipment to deliver high-current pulses to the diodes without destroying them, and set up an infrared viewing system to study the infrared light they hoped to generate. Jack Kingsley had worked with other lasers, so he knew what to watch for in their experiments. 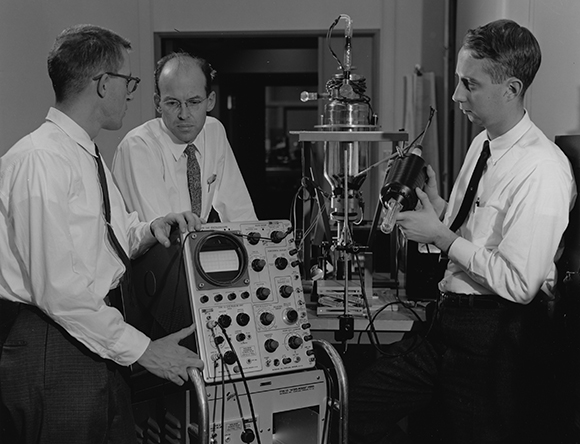 Nonetheless, Hall thought "we would stumble around" for a while before achieving anything. It took them about a month to produce gallium-arsenide diodes for Fenner to test. Some were dead shorts, and others self-destructed when the current hit them. But, others emitted light.

Fenner came into the lab to do more tests on Sunday, 16 September, and when he zapped test diode L-52 with a pulse of more than 12 amperes, he saw its emission increase rapidly in a way that he didn't understand. By Monday they "could clearly see that there were some very interesting patterns...and above a certain threshold the spectrum changed very drastically [so] you could see interference patterns and modes" with diode L-69, Hall recalled. Light emission had crossed the threshold for laser operation.

"It was a big rush from that point on," Hall said. "We found some diodes worked, but most of them didn't. Some of them did very strange things that we couldn't make much sense out of, but a few of them behaved in ways that we could understand and interpret as clear evidence for coherent light emission."

Kingsley's spectrometer showed clear spectral narrowing and multiple modes at the expected frequencies. It added up to a convincing story that they submitted to Physical Review Letters on 24 September, and was published on 1 November.

GE pushed for quick publication because they knew the field was about to explode. Because of the July conference, they were aware of Lincoln Lab and RCA's work on electroluminescence from gallium arsenide. They suspected the large laser group at Bell Labs was working on diode lasers. And they knew that another GE researcher, Nick Holonyak Jr. at the company's Syracuse Lab, who had also attended the Durham meeting, was working on diode lasers because he had asked Hall about them at the end of August. Sure enough, within weeks after Hall's groundbreaking publication, Lincoln Lab and Holonyak reported on their diode lasers in Applied Physics Letters, as did Marshall Nathan of IBM, whose report was a surprise.

The first practical devices to come from that burst of innovation were not diode lasers, but red LEDs made from gallium arsenide-phosphide, a compound Holonyak picked because its light is visible to the eye. It took major design improvements and years of additional work to make practical diode lasers. Herbert Kroemer and Zhores Alferov independently invented heterojunctions to confine current, leading to the first room-temperature diode lasers in 1970. Bell Labs spent years stretching diode lifetimes from minutes to a hundred years. New wavelengths and higher powers followed.

However, it's hard to match the heady excitement of the cascade of breakthroughs during those few weeks in the fall of 1962. While most Americans were worrying about the Cuban Missile Crisis, a new era of laser technology was dawning.

Jeff Hecht is an SPIE Member and freelancer who writes about science and technology. The quotes in this article are from his interview with Bob Hall in 1985. Hall died in 2016, aged 96.