Reconstructing the phase of a field from intensity measurements is a long-standing and ubiquitous challenge, known as the phase retrieval problem. Optical detection devices that rely on converting photons to electrons (electrical current), such as charge coupled devices, cannot measure the phase of a light wave. Coherent diffractive imaging (CDI) provides a solution. It has found wide application in material sciences and biology. CDI reconstruction techniques can be divided into two categories: iterative reconstruction algorithms and single-step methods.

Most reconstruction methods assume that the illumination is perfectly coherent. However, in some cases - for instance, when the source is a free-electron laser or a third-generation synchrotron, or when the experimental environment is unstable (e.g. due to fluctuation of the ambient medium, as with atmospheric turbulence) - the influence of partial spatial coherence cannot be neglected. It may be relevant to consider how the algorithms must be adapted when the illumination is partially spatially coherent. For the iterative algorithms, the solution usually involves mode decomposition; the lower the degree of coherence is, the more modes are required.

Recently, researchers at Soochow University (China) and Delft University of Technology (Netherlands) demonstrated the reconstruction of a phase object under partially spatially coherent illumination using a pinhole array mask (PAM). This PAM is specially designed such that one can retrieve the correlation function of the incident light by inverse Fourier transforming the measured diffraction pattern.

Compared to the traditional diffractive imaging methods that use partially spatially coherent illumination (which are iterative), the newly proposed method is noniterative and robust to the degradation of the spatial coherence. In addition to diffractive imaging, the PAM method can also be applied to spatial coherence property characterization, e.g., free-space optical communication and optical coherence singularity measurement.

This method overcomes several challenges of conventional iterative CDI algorithms and holographic methods. It is particularly beneficial for achieving a large field of view when using a low degree of spatial coherence illumination. The researchers demonstrated that the method can be used to calibrate the mutual coherence function of an arbitrary partially spatially coherent beam, and expect that it can be applied to a wide range of wavelengths, from x-rays to infrared light, due to its wavelength independence. 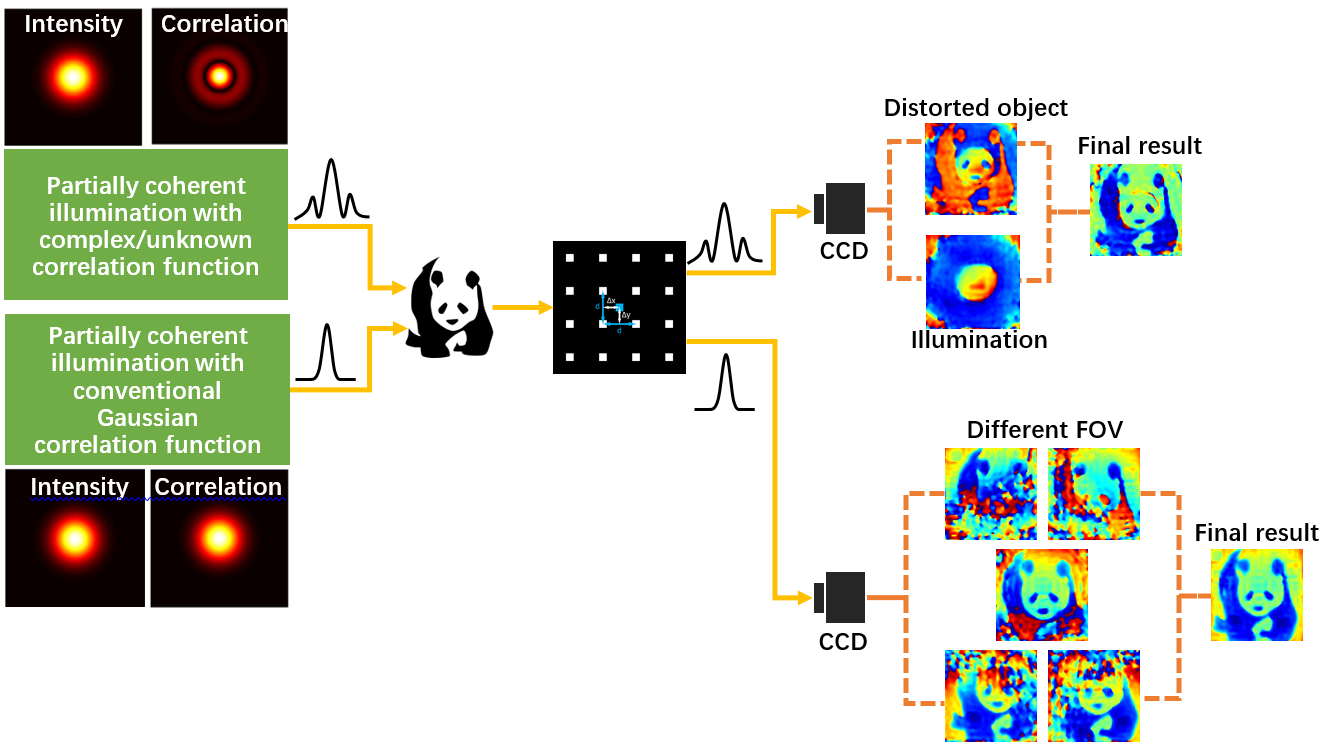 Schematic plot of two different applications of the experimental setup and the concept of the noniterative diffractive imaging method. The top branch illustrates how the method is able to reconstruct the object, even if the illumination has a nontrivial correlation structure. The bottom branch illustrates how the object can be reconstructed with a large field of view, even if the coherence of the illumination is low.