Holography has been widely applied for 3D display, data storage, encryption, and microscopy. Unprecedented demand for information processing has led to the development of high-capacity optical multiplexing holography, which exploits different orthogonal physical dimensions of light, including wavelength, polarization, space, and time. A new direction for optical multiplexing holography has been identified in nonlinear optics because it opens opportunities for exploiting new optical frequencies. However, a fundamental barrier to independent control of the interacting fields for holography is posed by nonlinear wave coupling in nonlinear optical processes, which generally causes the harmonic fields to couple with the input field.

To solve this problem, a high-dimensional multiplexing nonlinear holography technique was recently proposed by a team of scientists at China's National Laboratory of Solid State Microstructures at Nanjing University, and the Center for Artificial Intelligence Nanophononics at University of Shanghai for Science and Technology. As reported in Advanced Photonics, the technique involves dividing the wavefront of the fundamental wave into different orthogonal channels for orbital angular momentum (OAM). This allows multiple holographic images in both the fundamental wave and second-harmonic wave to be reconstructed independently in the spatial frequency domain. 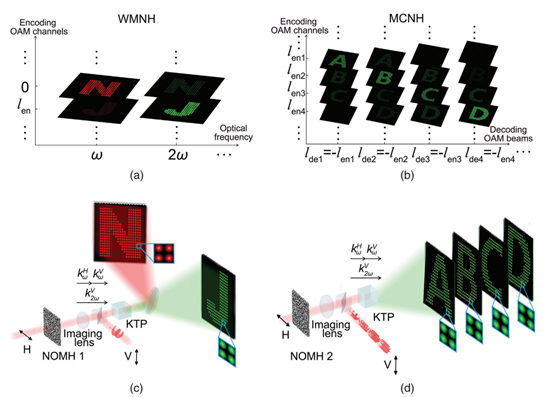 The team's experimental demonstration of the concept utilized a process whereby distinct images in various optical frequency channels are distributed in different OAM spaces. This leads to a nonlinear OAM-multiplexing hologram carried by one fundamental beam. When decoding an OAM beam, an opposite helical phase interacts with the hologram-carrying beam, so that only the targeted image appears in the designated optical frequency channel.

Each optical frequency channel can be further divided into multiple sub-OAM spaces. For example, individual images at 2ω can be reconstructed selectively by using an OAM fundamental beam with proper topological charge. The team notes that this novel method can be easily extended to higher harmonic generations if the phase-matching conditions are met simultaneously. Such extension can readily lead to the exploitation of more wavelength channels.