Historical accounts of epilepsy date back as far as written text. There are references to the disease from ancient Mesopotamia, and it even gets a mention in the Hammurabi code, dated 1780 BC, dictating that people with epilepsy cannot marry or testify in court. In fact, due to stigma and misconceptions surrounding the disease, life for people with epilepsy was pretty dismal for most of human history. They were often accused of demonic possession and segregated from society, and the belief that epilepsy is contagious persisted into the 18th century. In the United States, people with epilepsy were forbidden to marry in 17 states as late as 1956, a particularly dark decade of U.S. history that also provided for sterilization of these people on eugenic principles.

Although epileptology became a field of serious medical study in the 19th century, it wasn't until the invention of the electroencephalogram (EEG) in the 1920s that researchers began to understand the cause for the trademark seizures: an electrical misfiring in the brain.

However, the physical mechanism of monitoring the brain's activity via EEG has evolved little in subsequent decades. Neurosurgeons still use rigid metal electrodes glued onto a substrate which is then glued onto the patient's scalp (EEG) or placed directly on the exposed surface of the brain [intracranial electroencephalography (iEEG)]. These electrodes detect electrical activity in the brain, and can help identify anomalies that may be responsible for epilepsy and other neurological disorders, like Alzheimer's. 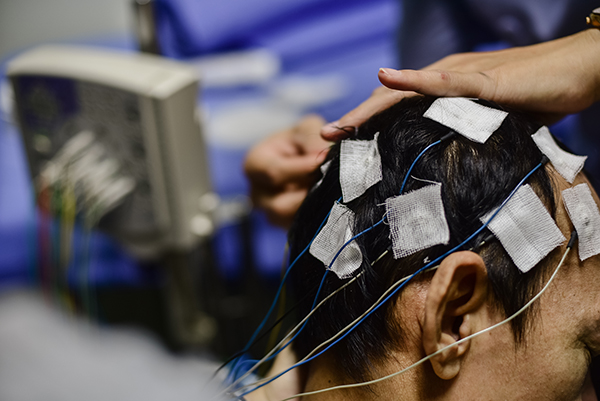 Hardware Gets an Upgrade

After nearly a century of status quo, the hardware for electrophysiology is finally evolving, enabling a new wave of research into epileptic disorders. Dion Khodagholy and Jennifer Gelinas at Columbia University and Medical Center, in collaboration with Gyorgy Buzsaki at NYU Medical Center, are working together to develop biocompatible polymer electrodes-known as NeuroGrids-that may replace the conventional metal electrodes in the near future. The polymer in their device conducts both ions and electrons, which is ideal for brain-machine interaction, because ions are the body's currency for communication, and electronics communicate via electrons. It's the perfect interface between technology and medicine.

Also at the intersection between tech and health are the two lead researchers working on this project: Khodagholy's group from the Department of Electrical Engineering is working on the device and analytical engineering, while Gelinas brings her experience as a neuroscience researcher and pediatric neurologist to apply this technology to solve clinical problems. "This work is not possible without our collaboration," says Gelinas.

One of the problems with the electrode arrays currently used in clinical practice is their large size and rigidity. NeuroGrids, on the other hand, can be microfabricated to be very small, on the same scale as a neuron in the brain. The small size allows the researcher to get a very precise window into neural activity. They can also be fabricated into very thin plastic substrates that are conformable to the surface of the scalp or brain, creating a much closer and more stable mechanical contact. 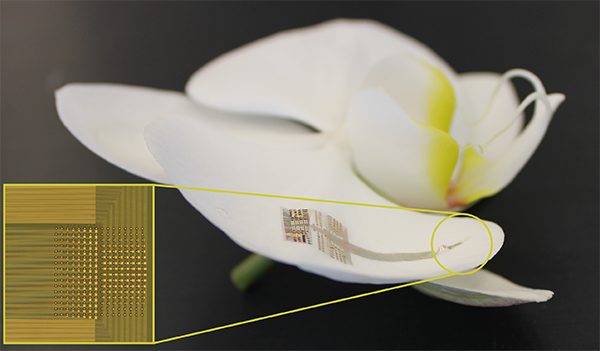 The NeuroGrid conforms to the surface of an orchid petal. Optical micrograph (inset) of a 256 electrode NeuroGrid. Electrodes are 10 x 10 μm2 with 30 μm interelectrode spacing. (Image courtesy of Dion Khodagholy)

In the lab, Gelinas is working on using Khodagholy's conformable arrays of electrodes to record brain activity and natural behaviors in animals. Of greatest interest to Gelinas is the ability to see what's happening in brains with epilepsy mutations.

Patients with refractory epilepsy—which means they have frequent seizures that have not responded to anti-epileptic drugs—may be candidates for a surgery to remove the area of the brain that's causing the seizure, a treatment that often allows patients to live seizure-free afterwards. Of course, the crucial task for the neurosurgeon and epileptologist is identifying the exact area that generates the seizure and removing the smallest piece of tissue possible so as not to harm healthy surrounding tissue.

To determine these epileptic foci, patients are monitored for 7–10 days in the hospital with electrodes placed on the surface of the brain, or even inserted into the brain. Using the recorded brain activity, the physicians will try to identify the specific area of affected tissue.

Gelinas's group believes that their organic electronic devices could allow physicians to get much higher spatiotemporal resolution data during this observational period without needing to penetrate into the brain and risk damage of blood vessels. If they can get better data with these tiny organic polymer electrodes, then physicians can more precisely locate the areas the seizures are coming from and hopefully make a smaller resection, further reducing the risk of tissue damage.

Their NeuroGrid has already been approved for use intraoperatively during the epilepsy surgical workup for short periods of time. They have been able to record for 30 minutes on human patients using the NeuroGrids, and they're getting all of the same data as obtained by conventional electrodes plus extra activity. Importantly, they can also detect individual action potential from individual neurons from the surface of the brain-a huge improvement over the current clinical practice, which requires penetrating into the brain to get that level of information.

Khodagholy, Gelinas, and Buzsaki are now working to make their device fully compatible with that 7–10 day pre-surgical monitoring period, which would allow them to see exactly where in the brain the neuron starts spiking first, and how that spiking activity spreads, allowing them to focus in on the epicenter of the activity.

Although their NeuroGrid has proven to be more sensitive than conventional electrodes for short recording periods, there's still work to do to make sure they're safe and effective for longer periods of time. "The device has to be robust, MRI compatible...there are lots of steps to make sure it's a fully functional device that won't interfere in any way with the clinical procedure," says Gelinas.

However, there's a group of epilepsy patients for whom surgical resection is not an option. Sometimes the foci for the seizure activity is too deep in the brain to operate, generates from multiple points, or originates in a region of the brain that is responsible for critical function-like speech, mobility, or cognition-and cannot be safely removed. For this subset of patients, there's an FDA-approved electrical stimulation device called NeuroPace® that is encased in metal, implanted in the skull, and worn by the patient for years. The device looks for brain rhythms associated with the patient's seizures, and when it detects those rhythms, it delivers a pulse of electrical stimulation to try to stop the seizure.

Gelinas points out that there are a lot of opportunities for materials and engineering improvements with a device like NeuroPace®. "If we're able to bring some of these organic materials into the fray, then in theory we could do all of that complex logical processing that's needed to detect epileptic activity and deliver the stimulation, but we'd be able to do it with a much smaller form factor, and with something a lot softer and better matched to the mechanics of brain tissue."

There's no reason that the NeuroGrid electrodes, which are only clinically used for recording brain activity at present, couldn't be reversed so that the brain could be stimulated through them instead. In fact, Khodagholy's engineering group is working on creating fully biocompatible transistors—known as ion-gated organic electrochemical transistors (IGTs)—that could then work together with the electrode arrays to do computation or stimulation. 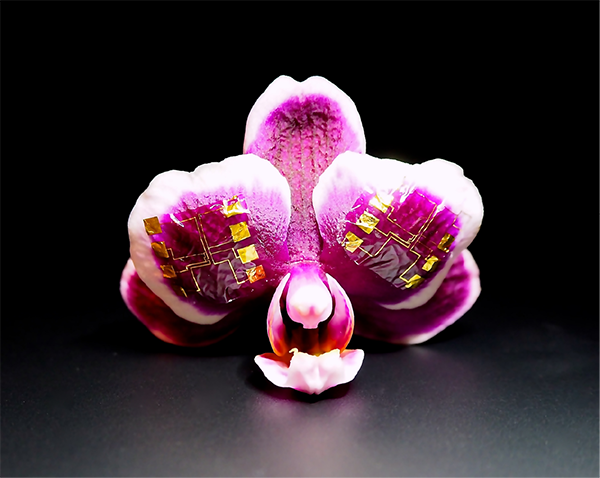 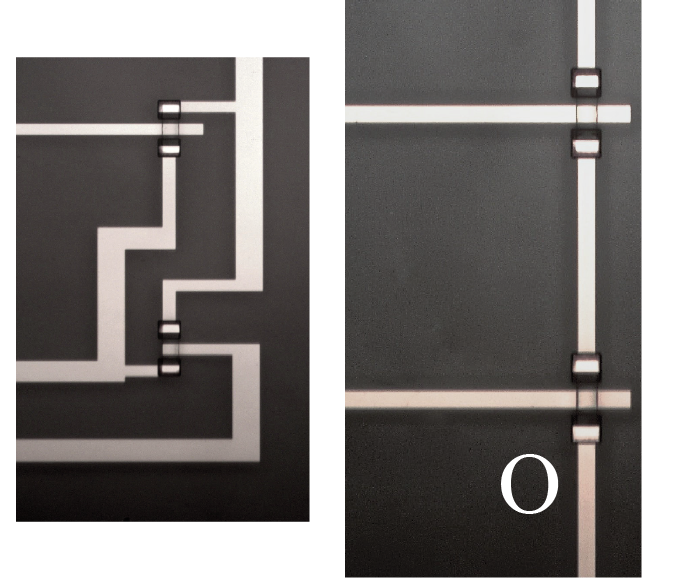 Gelinas is just beginning to incorporate these new transistors into her research work on mice, starting with stimulating peripheral nerves in the paw. Because the transistors are very small and flexible, they can be molded to the tiny paw and get good contact, creating efficient stimulation. She says, "We're hoping we can stimulate right through the skin noninvasively, so you don't have perform an incision. Anytime you can do something without cutting into the tissue, it's really beneficial."

She's starting with the peripheral nervous system because it's so much easier to access, and because peripheral nerves have such specific directionality and function. The brain, on the other hand, is highly complex, and stimulating an area of the brain does not always have the anticipated response. If this technique is promising on the peripheral side, they will then see if the same approach can be used to stimulate the brain.

Although their work on nervous system stimulation using IGT is still in the research stage, the Gelinas and Khodagholy groups, with George Spyropolous (postdoctoral fellow) leading the project, have started performing EEG experiments with these biocompatible transistors, which look like tiny devices on a plastic ribbon so small that it fits between the hairs on the scalp. The device incorporates some sugars into its function, which makes it a little sticky and able to self-adhere-a major improvement over electrodes that must be glued on top of hair on the scalp. 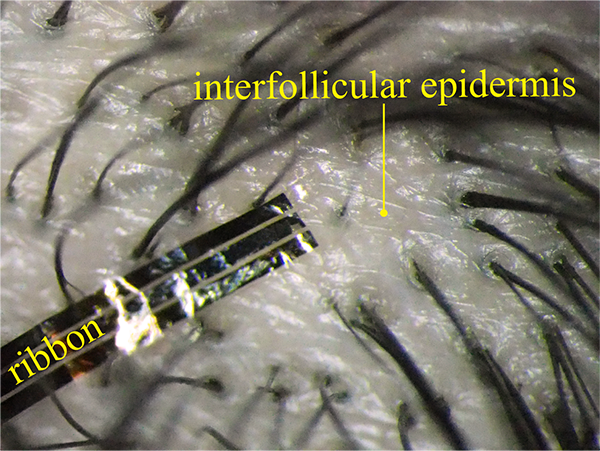 IGT on a small ribbon fit between the hairs on the scalp. (Image courtesy of Dion Khodagholy)

Gelinas hopes that her research program will ultimately help to tailor medical treatment to a patient's specific neural dysfunction without side effects, and believes that development of soft organic devices that can better interface with neural tissue is a first step in this direction. When combined with the decreasing form factor for these devices, epilepsy patients may someday be able to live a symptom-free—and stigma-free—life.