LISA: A Gravitational-Wave Observatory for the 21st Century Space Age

For a long time, it was believed that space-based interferometers would be the first to be able to measure gravitational waves due to the wealth of low frequency sources throughout the Universe, including our own galaxy. But, notes Martin Gehler, study manager of the European Space Agency, funding for space exploration was lacking, and the ground-based Laser Interferometer Gravitational-Wave Observatory (LIGO) beat all others to the punch. Soon, however, it's space-based technology's turn: the Laser Interferometer Space Antenna (LISA), due to be launched in 2034, will peer into space and all the way back to the first objects in the Universe, complementing and adding to the gravitational-wave observations already possible with LIGO.

LISA consists of three spacecraft in a triangular formation that will provide access to the millihertz frequency band of the gravitational wave spectrum, offering an observation of the Universe far beyond that of LIGO — and any other observational platform, for that matter. A powerful combination of telescopes, lasers, and metrology will work with a baseline of pre-generated, simulated wave forms to seek out matching patterns in signals. "We record the change in the distance between freely-floating test masses, and, from simulations, we know what certain events would look like in that time series , so we try to find those," explains Gehler who presented a plenary talk on LISA at SPIE Optics + Photonics earlier this year. "The interesting part is what about the stuff that we don't know? After we've extracted all the things we know from the signal, what's left? We hope to find something surprising in the signal, but we just won't know until we see it." 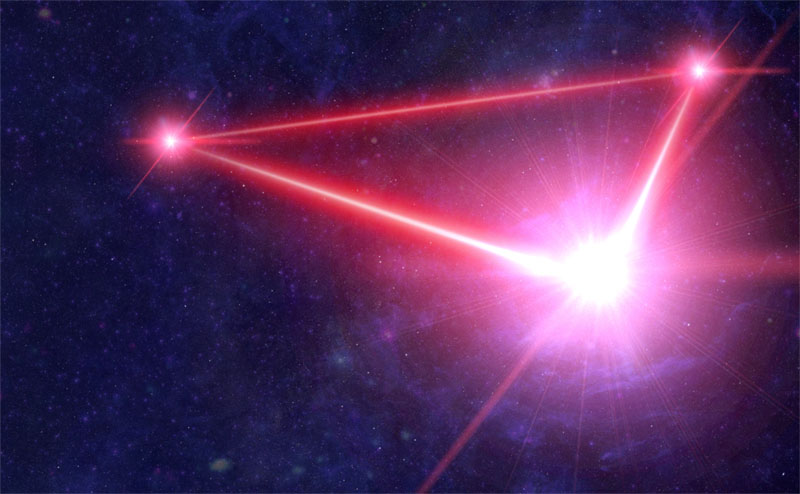 Black holes, some of them the oldest cosmic entities in the universe, are difficult to detect electromagnetically. LISA will be able to find those black holes and provide detailed information about them: How big were they? What's the mass evolution of black holes? How often do they collide? How do they influence the large-scale structure of the universe? In addition, notes Gehler, LISA will look forward into the future, providing a predictive as well as an observational element.

With events such as massive black hole mergers, there's an X-ray emission that may accompany the merger. With LISA, as Gehler explains, we'll be able to watch that merger, and observe the chirp of the gravitational waves as the black holes spiral together; we'll also be able to point X-ray observatories to where LISA has calculated that the signal will appear: "It's basically enabling us to predict when something interesting is going to happen; we'll characterize the masses of black holes and their rotational states with LISA, and also be able to follow that up with observations: we'll be able to see the full spectrum of the electromagnetic signals from before the merger until the event-end."

There are a few interesting challenges facing LISA at this point. Ensuring that there would be high-quality freefall available was mitigated by LISA Pathfinder, a precursor mission, which also tested part of LISA's interferometry measurement system. The new challenge with the metrology system is an engineering one: enlarging its reach from 38 cm on Pathfinder to 2.5 Million kilometers while keeping it lightweight so that it fits in the launcher. Then there's LISA's telescope currently being developed by NASA. "We need to send and receive light at the same time through a telescope and it's not your typical light," says Gehler, "It's laser light and the optical system needs to be of high enough quality that you don't mistake errors in your optical system for a gravitational wave, even if the numbers are quite small. So the telescope is also an engineering challenge, making sure that you get the optical quality right and making sure you have an ultra-stable metering structure that holds the mirrors so you don't get a pico-meter piston effect that would present itself as a gravitational wave signal." 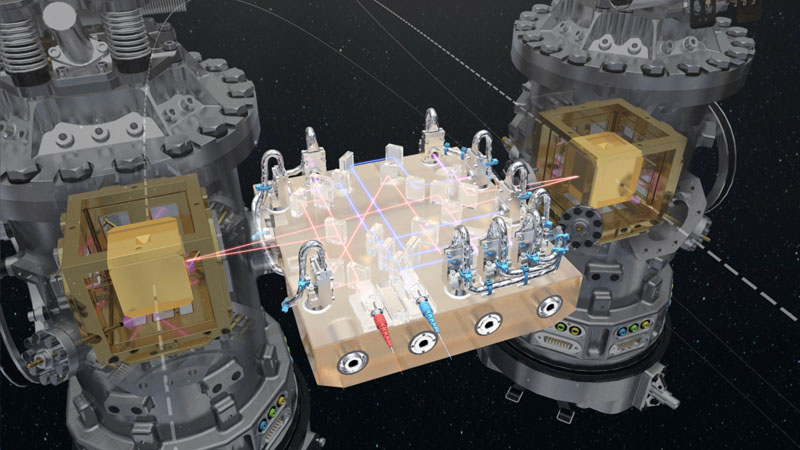 Artist's rendering of the LISA Pathfinder instrument with the two gravitational reference sensors and the optical bench with the interferometers. Credit: ESA/ATG medialab

Another of LISA's challenges is its laser system. "It's the same laser that flew on LISA Pathfinder but with a high output power amplifier after the master oscillator," says Gehler. "And it's the laser that flies on all of the laser communication terminals that we have, so in principle the laser works." The US is investigating a micro-version of the system, trying to miniaturize it a bit and make it lighter. "On the European side, we've tried to focus on different seed technology so as not to be dependent on a single source," adds Gehler. "We've tried to broaden our potential options with the laser system."

Such flagship-class missions, of course, don't come cheap — LISA is a billion-dollar mission — but that just opens exciting opportunities for international collaborations. "it's important to highlight that these missions are only possible because there's so much interest across the world," says Gehler. "It's also important to note that LISA serves the international science community: We build the mission that enables others to use the science that the mission will do. Many of the countries and science entities involved, including the United States, are funding the science exploitation of the mission as well, and the mission will produce information and resources, ultimately through an open-access data policy."

That kind of crowd-sharing is inherent in LISA's technology, says Gehler. "LISA is more analogous to a microphone than a telescope: the data contains all the signals simultaneously from the entire Universe. So if you have access to the data, you can do all the science you want. There are no restrictions."

And that's the beauty of LISA.

Prospects for a space-based gravitational-wave observatory