Laser Weapons: Moving from Movie Theaters to Theaters of War

Once only the realm of science fiction, field testing has begun on laser weaponry
18 June 2019
By Nick Stockton
Technology

Artist impression of two YAL-1As shooting down ballistic missiles. The image is in the public domain.

Fifty-five years ago, the eponymous villain of the movie Goldfinger strapped James Bond to a table, pointed a high-energy industrial laser between his legs, and informed the spy of his fate. Spoiler alert: 007 survived, and so did the trope of laser weaponry. Countless other fictional universes have used high-energy photonics to fuel their imagined conflicts—from stunning Klingons in Star Trek, to atomizing worlds in Star Wars.

But, how far off are these fictions from reality? Defense contractors like Raytheon and Lockheed Martin have, in recent years, developed high-energy lasers capable of blasting drones out of the sky, blowing up floating targets, and burning holes through trucks. These stunts are more than just high-profile PR. The US Department of Defense has already equipped ships, aircraft, and land vehicles with laser weaponry for testing in the field. According to some directed energy experts, laser weapons are on the cusp of combat readiness.

The defense community has been theorizing about photonic weapons for a long time. "At some point in the distant past, Archimedes supposedly talked about using mirrors to burn enemy ships by redirecting the sun's light," says Glen Parram, a professor of physics at the Air Force Institute of Technology and longtime SPIE member. He jests, but points out that military minds have been taking laser weapons seriously longer than you might think. The US Department of Defense convened a classified conference in 1963—just three years after Theodore Maiman lit up the world's first laser—with the purpose of assessing the military use of lasers.

The details of that conference are unknown (it was classified, after all), but it's a safe bet the outcome was an affirmative for high-energy photonics, because the defense community has spent the better part of six decades slogging through some of optical engineering's most difficult challenges.

First and foremost was creating the high-power photons themselves. Early on, that was done by firing electrons through various crystals. However, these early attempts to electrically generate weapons-grade lasers required too much energy, created too much waste heat, and couldn't provide a consistent photonic oomph. These problems all come from the electric laser's inefficient use of energy. A laser might take 500 watts of energy to create a 100-watt beam, with most of the rest going to waste—which is to say, becoming heat. If the laser can't shed heat fast enough, the extreme temperature gradients will futz with the laser's beam quality. This would be akin to a rifle overheating and suddenly firing blanks.

"The inefficiencies of electrical systems forced the government folks to look at creating photons using chemical reactions," says Mark Niece, the executive director of the Directed Energy Professional Society. This led to the evolution of lasers, from CO2 lasers, to hydrogen fluoride lasers that operated in the mid-infrared, and eventually to chemical oxygen iodine, like that which operated aboard the Boeing YAL-1 Airborne Laser Platform—an Air Force-funded program that strapped a chemical laser to the nose of a 747; the project was cancelled in 2011. Along the way, these scaled from watts to kilowatts to megawatts in terms of output. 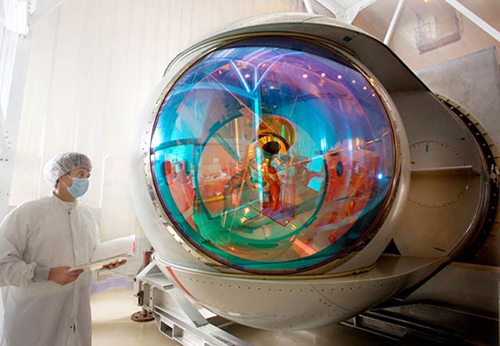 An engineer inspects the Turret Ball Conformal Window of the Flight Turret Assembly for the Airborne Laser mounted on the nose of a Boeing 747. Credit: Lockheed Martin

Chemical lasers, however, presented their own logistical challenges. Any given chemical medium can only produce a limited number of consistent shots before it needs to be replenished. In this way, they mimic the limitations of traditional kinetic weapons: they always need more bullets. So, despite some successful chemical laser weapon platforms—the YAL-1 Airborne Laser is probably the most notable—the military kept open its side bets in electrified lasers.

By the early 1990s, the commercial cutting, welding, and machining industries had developed very powerful electric lasers and brought the costs down significantly; a win for the crossover technology. Electric lasers now came in two distinct flavors: solid state and bundled fiber optic.

Solid-state lasers descend from Theodore Maiman's original ruby-fired prototype. They channel electrons through synthetic crystals that have been doped with a small amount of rare-earth minerals, such as neodymium or ytterbium. In 2009, Northrup Grumman's Joint High Power Solid-State Laser broke the record for a high-energy laser by producing a 105 kilowatt beam.

Since then, laser developers have pushed solid-state lasers in excess of 150 kilowatts and are currently hovering at around 28 percent wall plug efficiency, according to Niece. Which is great, except that increases in solid-state laser power come with commensurate increases in size, making them too big for just about any tactical platform besides warships.

Luckily, the fiber optics industry had its own technological breakthroughs. First, individual fibers could now handle kilowatt levels of power without degrading. Second, engineers at Lawrence Livermore National Laboratory figured out how to combine multiple fiber-optic inputs into single output beams—sort of like a prism in reverse. "That's a bit of a black art right now, and still highly classified," says Niece.

As a result of these key technologies, and a lot of iterative work, bundled fiber optic lasers are capable of pushing out nominal power rates between 60 and 100 kilowatts at roughly 36 percent wall plug efficiency.

"All this leads to a maturity of fiber lasers that can be packaged and integrated into combat vehicles and taken to the field for experimentation," says Niece. Which is exactly what companies like Raytheon, Lockheed Martin, and others have done with those flashy laser weapons advertised on their websites. Sailors, soldiers, and airmen are currently field testing these high-energy lasers—which have to weather sand, storms, bumps, temperature extremes, and operator foibles. "If we have to change the diode every 10 hours because it burns out in the desert, that probably doesn't give the soldier as much confidence as trusting their rifle," says Niece.

Niece's comment illustrates the whole point of laser weapons: they are not intended to replace traditional weapons, but to operate within niches where they might perform as complements to the traditional kinetic armament. Currently, high-energy lasers are best suited for short-range defensive tactical missions, like protecting a ship from fleets of fast attack boats, or an Army truck from a swarm of drones.

However, lasers aren't suited for all short-range tactical situations. For instance, handheld laser weapons, like the phaser from Star Trek, aren't on the foreseeable horizon. "Not to say the military isn't interested in that," says Niece, but as of now, the architecture would be unsuitably bulky. "Think back to Ghostbusters: how can we generate that type of electricity without carrying a particle accelerator on your back?" says Niece.

Suffice to say, neither will the military be building a Death Star anytime soon. Space lasers need to operate in extreme temperatures, be armored against radiation, somehow generate massive volumes of energy, and track minute targets with extreme precision. With the current limitations on launching gear from Earth into space, building a laser big enough to do damage from orbit just isn't feasible. Galactic conquest will have to wait at least another 60 years.

Nick Stockton is a freelance writer based in Pittsburgh, Pennsylvania. He contributes to WIRED and Popular Science.