Spinal cord injuries have unpredictable outcomes. While some recover full movement, others suffer permanent paralysis, ranging from partial to full-body. Along with paralysis often comes loss of bladder control, sexual dysfunction, phantom pain, bed sores, and mental health issues, among other challenges. Despite monumental advances in medicine and technology in the last two decades, a surgical solution does not yet exist, and physical therapy remains the dominant therapy for spinal cord injury.

That could soon change. At the beginning of October, Brown University announced a $6.3 million grant from DARPA to develop and test an intelligent read-write link for the spinal cord. This two-year project will attempt to connect the neurological signals from above and below spinal cord injuries and aims to restore two-way communication in the spine. This project will be led by David Borton, assistant professor of engineering at Brown University School of Engineering and the Carney Institute for Brain Science.

Decades of research leading up to this point has shown that it is possible to reconnect some neural signals between the body and the brain.

For Borton, the work to read brain signals began when he was a doctoral candidate at Brown in 2006, where he was inspired by the work of colleagues who demonstrated the ability to turn neural recordings into computer cursor control. That project, known as BrainGate, uses implanted brain-recording electrodes to capture information from the motor cortex, sends the signal to a computer, and then uses that information to drive a cursor on a computer screen. In that landmark study, paralyzed patients—people who cannot move, but are awake and alert—could type an email or play a virtual piano using their minds. Borton's thesis work focused on the development of next-generation neural recording systems that were fully implanted, using wireless power and data telemetry.

With the assistance of brain-recording electrodes, a paralyzed patient uses his mind to control a cursor and type in a chat window. Credit: BrainGate

The upcoming intelligent spine interface project builds on Borton's 2016 postdoctoral work with Gregoire Courtine at the Center for Neuroprosthetic and Brain Mind Institute at the Swiss Federal Institute of Technology Lausanne, where they developed a brain-spine interface. In that study, they were able to record from the brain and use those signals to stimulate the spinal cord, bypassing a spinal injury.

This groundbreaking system receives data from the leg area of the motor cortex and, similar to the computer-in-the-loop BrainGate system, relays that signal to a computer, which interprets whether the person wants to lift up the leg or put it down, and then relays that information to a Medtronic spinal cord stimulator that stimulates the nonfunctional limb. Their 2016 pre-clinical study demonstrated that the brain–spine interface was able to restore weight-bearing motion of a paralyzed leg as early as six days post-injury.

Tetraplegia is defined as complete paralysis of all four limbs and torso. However, even in tetraplegic complete patients, there is often still a tissue connection at the lesion site, and previous research has demonstrated that it's possible to retrain neural pathways to use those remaining connections and regain some lost function.

The intelligent spinal interface will sit above and below the spinal cord lesion and stimulate across that gap, utilizing an AI-trained computer chip to decode signals recorded from the spinal cord, retrain the remaining networks, and initiate the correct intended behaviors. By leveraging knowledge of the spinal cord circuitry, they hope to train the artificial neural network so that it continues to learn over time. 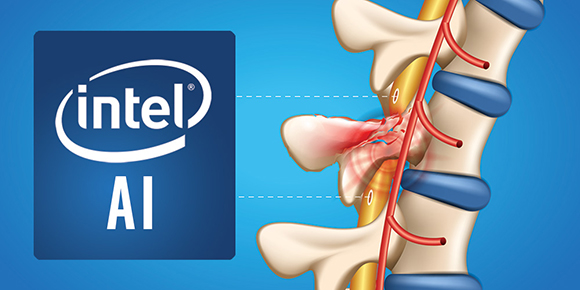 Diagram illustrating the spine-to-spine interface: Data comes in from one spinal cord array and is transferred out to an external compute unit, which makes a decision about what should be stimulated, then sends back in stimulation commands. In the other direction, a command from the brain comes down to wiggle the toe, gets sent to a compute unit to be interpreted, and then back out to stimulate the toe wiggle. Credit: Intel Corp.

The chips are created by Intel, one of the project's commercial partners, which has a division that focuses entirely on advanced neural compute architectures. The team is also using Intel's open-source compilation library called nGraph, which allows neural network models to be compiled to different hardware targets. This means that the same network code can be run on a server with a lot of power or compiled down to run on something with much less processing power, like a phone or, perhaps one day, an implanted device.

"nGraph gives us a unique pathway to pilot possible future therapeutic models across a wide range of hardware targets. The hope is we can compile our algorithms down to an implantable system in the future, without significant redesign," says Borton.

In the upcoming project, the initial research will focus on exploring what signals remain to be recorded in the spinal cord post-injury, and how those signals could be used to control the legs for walking, standing, and signals related to bladder control, which is a primary concern reported by people with spinal cord injuries.

The project is designed to demonstrate that the spine-to-spine device can properly target the neural circuits that influence these activities. During the initial phase, an external computer will connect the upper and lower spine and decode the signals, similar to the computer-in-the-loop systems utilized in Borton's earlier neural device work. But they hope this study will lay the groundwork for a future fully implantable device.

In spring 2020, the researchers expect to begin the first human studies. The first trial will include two patients who have chronic spinal cord injuries in the C7-T10 range and are at least five years post-injury. They'll have a surgery done to implant electrode arrays and stay in the hospital for less than 29 days. The participants will have a percutaneous connection coming out of their body, which is connected to an external stimulator that allows the doctor to try different stimulations for a few hours every day.

If this sounds like an exciting and life-changing experiment for a person living with paralysis, it could be. But even if the researchers are successful in creating a functional neural bypass in the spine, the patients won't keep the implanted devices in this program. When the study is over, the electrode arrays will be explanted, and the patients will go home. "They're coming in because they want to help further our understanding of their injury, and help develop future therapies," says Borton.

Although a series of successful enabling technologies have led up to this point, and although the research team has been modeling the study for months, Borton is uncertain what they will ultimately be able to record, or what will happen as a result. It's information that the models can't predict.

"The project is a big step from a scientific perspective. We simply don't know everything about what the spinal cord does, particularly post-injury," says Borton. He compares the limited knowledge of the spinal cord to the state of our knowledge of the brain 20 years ago. Thanks to increased funding and interest in brain research, that knowledge has grown substantially in recent years.

"It's going to be a scientific leap," he says. "I'm not sure what we're going to find. It's exciting."

Find some of Borton's work leading up to the intelligent spinal interface on the SPIE Digital Library.