Once again, the US faces an uncertain appropriations year, as mandated cuts in government spending loom, and a deal to prevent those reductions from going into effect yet to materialize.

Passed into US law back in 2011, the Budget Control Act (BCA) mandates cuts in both defense and nondefense spending totaling $1.3 trillion from FY2012-2021. In 2018, congress agreed to a two-year budget that raised those mandatory caps in spending for FY2018 and FY2019. Without another budget agreement, the US will be looking at about a 13% cut to defense spending and 11% cut to nondefense spending in FY2020. Should this happen, it would mean significant cuts for research and development funding across the federal government, and no hope for the increases sought after in many critical, growing areas of science and technology.

This also comes at a time of increased international competition. According to a recently released benchmark report by the Task Force for American Innovation, the US share of global R&D had declined from 38.3% in 1995 to 28.5% as of 2016. This is largely due to the significant increased investment by Taiwan, South Korea, and China. According to the report, China is likely to catch up to the US in terms of "R&D expenditures within the next few years." 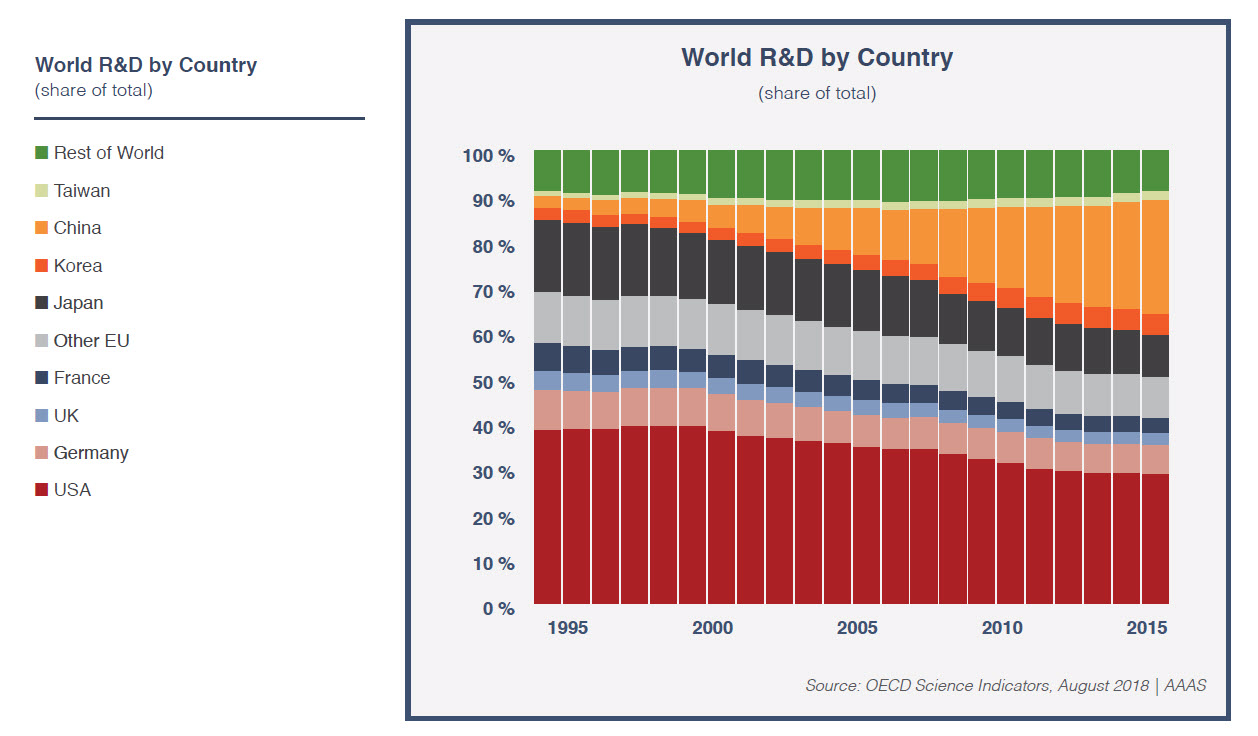 While other countries are increasing their investments, the US is among only a handful of countries who have seen a decrease of over 15% relative to gross domestic product (GDP) since 1995. Another country cited to have declining investment relative to GDP during this time period is the United Kingdom (UK). However the UK government has announced intentions to raise the UK investment in research and development (R&D) to 2.4% of GDP over the next ten years.

Additionally, in the US there is an evident shift from engineering and physical sciences to medical and life science. This can be seen in terms of publications and in federal financial investment. "In engineering alone, the US share of article production decreased from 23% to 12% during the 2003-2016 period," states the report. During that same time, China far surpassed in the US in terms of publications. 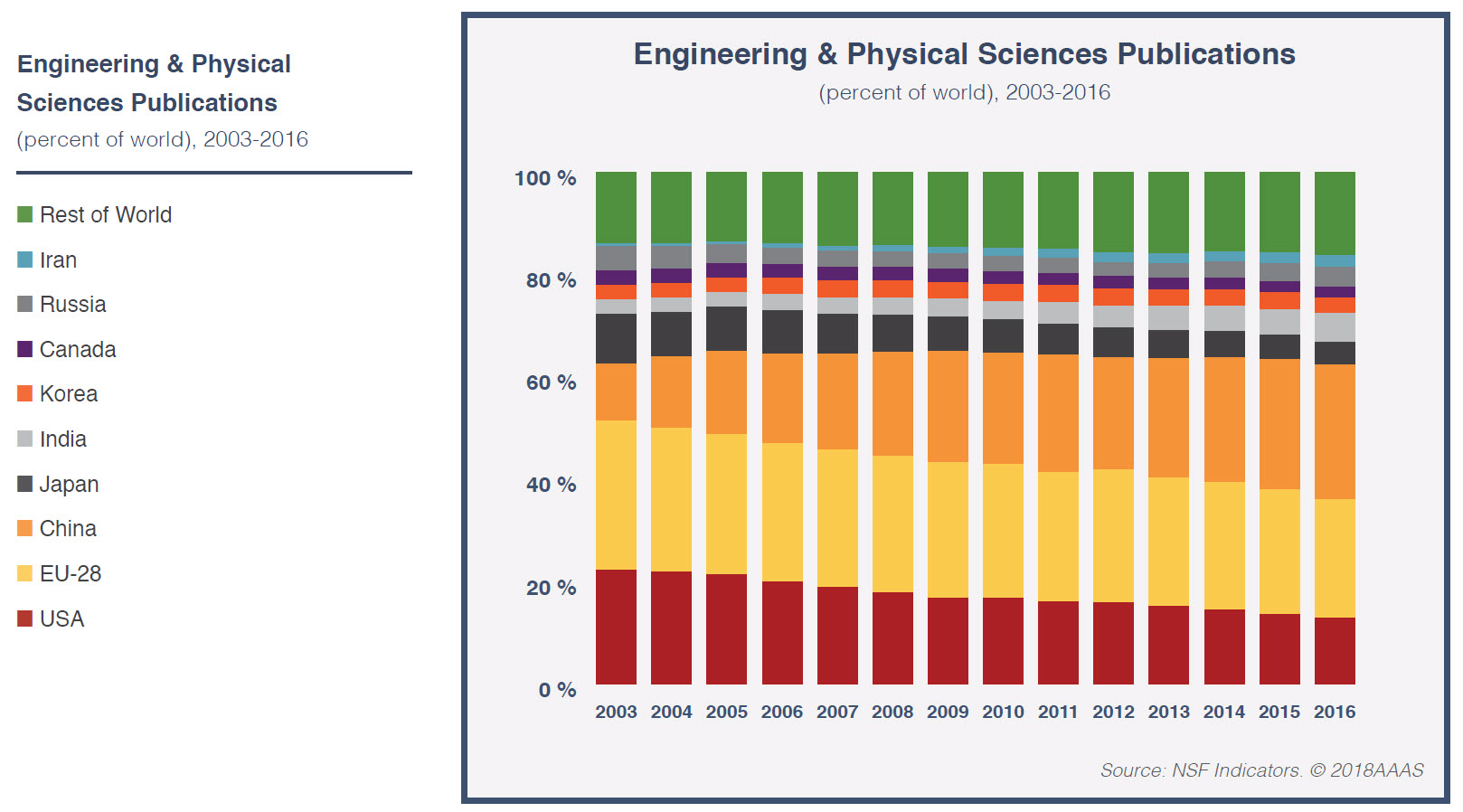 Though the US called for the doubling of the budgets of NSF, NIST, and DOE via legislation titled America COMPETES Act, this authorization bill was unable to obtain the support necessary to reach the funding goals called for in the bill. Alternatively, the 21st Century CURES bill, which called for a large increase in investment at the National Institutes of Health (NIH), has received broad support, resulting in the NIH budget increasing 30% since 2015.

A white paper published by the Center for Innovation Policy at Duke Law cited that physical sciences and engineering research "represented 41% of the [US] federal science budget. Thirty-five years later its share had fallen to 28%. The life sciences had picked up the entire difference." However, as the paper highlights, the solution is not to simply shift funding back to the physical sciences, but to treat all science as a national priority and increase these budgets.

The final indicator highlighted in the report is triadic patents, which is a patent filled at "European Patent Office, Japan Patent Office, and the United States Patent and Trademark Office that share one or more priorities" according to the Organisation for Economic Co-operation and Development (OECD). Triadic patents are generally seen as representing higher quality. The largest economies to file triadic patents are in East Asia, which includes Japan (the largest), South Korea, Taiwan, China, Hong Kong, and Singapore. Though the US has increased its triadic patents between 1990 and 2019 by 21.7%, this does not compare to the increases seen by East Asia. 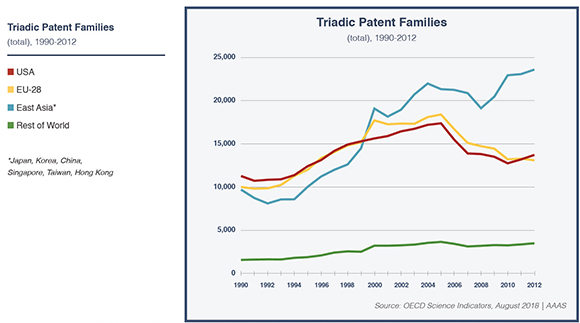 Put this in the context of the FY2020 debate on research and development spending, and it is very clear that a deal to raise the mandated budgetary caps on spending is coming at a critical time for the United States. In order to maintain its leadership standing in research and technology, increased investments in the US cannot be delayed over political battles.

We will likely not know how the budget debate will end until sometime in the fall of 2019, when the necessity of increasing the debt ceiling puts pressure on congress and the White House to negotiate. If spending is allowed to increase, it will then be up to appropriators in congress to prioritize R&D investment.