The US Trade Representative has announced a process for US companies to request permission to continue importing targeted items on a duty-free basis.

The US administration officially made good on the threat to impose tariffs on Chinese goods on 6 July 2018 as a 25% tariff on a first round of products totaling $34 billion in value came into effect. This constituted the boldest move yet in a growing trade war between the US and China, largely spurred by what is seen by the US as unfair practices. China immediately retaliated with their own list of tariffs on $34 billion of US goods.

Anticipating additional of US tariffs in the near future, on 3 August China released a list of around $60 billion in US goods that could be subject to retaliatory tariffs should the US continue with additional tariffs. The US did continue, and on 23 August, a second list of tariffs was imposed by the US on $16 billion worth of Chinese products at a 25% tariff. Once again, China immediately retaliated with tariffs on $16 billion of US products, leaving approximately $44 billion in US goods that China could subject to retaliatory tariffs in the future.

A third list targeting $200 billion worth of Chinese goods has also been proposed by the US. It is expected that this list will be finalized soon, but it is unclear if the tariff imposed will be 10% or 25%. China will once again retaliate. However, with less goods left to target, retaliation to match the $200 billion US number could result in other forms of retribution targeted at the US, such as visa policy changes or on US businesses with locations in China.

The US Trade Representative announced a process for US companies to request permission to continue importing targeted items on a duty-free basis. As part of the announcement in the Federal Register, the justification for obtaining an exemption includes whether the product in question is available from a source outside of China, whether the duties imposed would cause "severe economic harm" to the petitioning company, or whether the product proposed for exclusion is important to Made in China 2025.

Those who wish to request an exemption for a product listed in the 6 July announcement have until 9 October 2018 to submit their request. For the product list announced on 23 August, the process for requesting exclusions will be made available soon in the Federal Register. There will be a public posting of exclusion requests, allowing the public to object to any of the requests. Once an exclusion is approved, it will be valid for one year upon publication of the exclusion determination and will apply retroactively to the date the tariff was imposed.

Effect on Optics and Photonics Companies

Many of the items listed on all three of the US products lists of Chinese goods contain optics and photonics technologies. Some examples include mirrors, lenses, germanium, certain lasers, optical fibers, and optical instruments, to name a few. How the inclusion of these technologies and materials affects US optics and photonics companies will depend on the how the company manufactures the items it produces. For Chinese companies producing products listed for US tariffs, the impact is obvious, but will of course vary based on how dependent an individual company is on the US market.

For US companies that have established a wholly owned subsidiary in China, the imposed US tariff can have huge financial consequences. For companies with this manufacturing structure, it is often the case that a particular component is manufactured in China that is then shipped to the US to be assembled or packaged before the ultimate end-item is sold. Without an exclusion, companies in this situation would be forced to make hard choices to ensure that exorbitant increases to their end-item are not incurred. One of the potential options to avoid the increased duties would be to offshore the entire manufacturing and packaging process for the item.

Another example of how this could affect US companies is if one of the products listed is a component or material being sourced by a US company from a Chinese company to manufacture their product in the US. If there is not a competitively priced alternative being produced outside of China, this would put the US company at a competitive disadvantage globally.

Finally, though the response from China initially focused on agricultural products, the released list of $60 billion of US goods that China threatened to use in retaliation to US tariffs on 3 August includes many optic and photonic products. For example, optical instruments and appliances, lasers (other than laser diodes), and optical elements of glass for optical instruments, just to name a few. China's $16 billion in tariffs, released on 23 August, largely steered clear of many of the optic and photonic products on this proposed list. However, it is likely that the remaining items will be used to retaliate to the next expected round of US tariffs.

There is growing frustration among members of the US Congress, particularly within the Republican Party. Senator Orin Hatch, Senate Finance Chairman and a Republican representing the state of Utah, said the recently announced $200 billion in tariffs on China "appears reckless and is not a targeted approach." House Ways and Means Committee Chairman Kevin Brady, a Republican from Texas, stated, "I strongly urge President Trump and President Xi to meet soon face-to-face to craft a solution to establish fair and lasting trade between our two countries."

Trade Talks Resume
On 23 August, the same day as the second round of US and Chinese tariffs went into place, US Treasury Undersecretary David Malpass and Chinese Commerce Vice Minister Wang Shouwen met in Washington, DC, the first meeting between the two countries since negotiations fell apart in June. This meeting was meant to restart negotiations and set the stage for higher-level talks after the midterm elections in the US. However, reportedly, the meeting did not result in any clear sign of progress.

It is unclear at this time if the increased pressures from the business community and Congress will led to a negotiated end to the trade war between China and the United States. 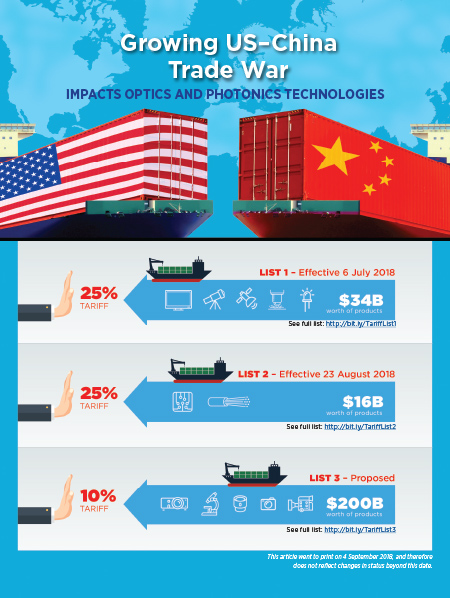 Jennifer Douris O'Bryan is the Government Affairs Director for SPIE and the Vice Chair of the Sensor and Instrumentation Technical Advisory Committee (SITAC) at the Department of Commerce.