The development of cost-efficient, portable microscopy units would greatly expand their use in remote field locations and in places with fewer resources, potentially leading to easier on-site analysis of contaminants such as E. coli in water sources as well as other practical applications.

Current microscopy systems, like those used to image micro-organisms, are expensive because they are optimized for maximum resolution and minimal deformation of the images the systems produce. But some situations do not require such optimization—for instance, simply detecting the presence of pathogens in water. One potential approach to developing a low-cost portable microscopy system is to use transparent microspheres in combination with affordable low-magnification objective lenses to increase image resolution and sensitivity.

A group of researchers from Ecole Polytechnique Federale de Lausanne (EPFL) in Switzerland published a study on such an assembly composed of barium titanate spheres that are partially embedded in thin polymeric membranes. The result of their work, appearing in SPIE's new Journal of Optical Microsystems, is a proposed method to fabricate microfluidic chips using the assembly for enhanced detection of bacteria. Such customized chips with fluidic and optical components already integrated have many benefits when combined with portable low-end imagers for analyses at remote sites or in resource-limited regions.

"Cost reduction and portability are of benefit to the proliferation of analytical devices, especially in limited-resource contexts, and the integration of affordable micro-optical elements directly onto microfluidic chips can highly contribute to this," said Martin Gijs, a professor at EPFL and an author of the published work.

The assembly's ability to enhance bacteria detection paves the way for other applications friendly to use at remote sites. Additionally, the researchers revealed an opportunity to customize specific functional microfluidic elements. Such integrations could bring to fruition applications such as on-site antibiotic testing.

Given falling costs of the components and fabrication methods, the researchers' proposed fabrication protocol could be adapted easily for a wide variety of microfluidic chips with integrated optical elements. Considered along with the lower cost of low-end imaging systems, the approach could sharply increase the use of such microscopy systems in low-resource locations for on-site analyses. 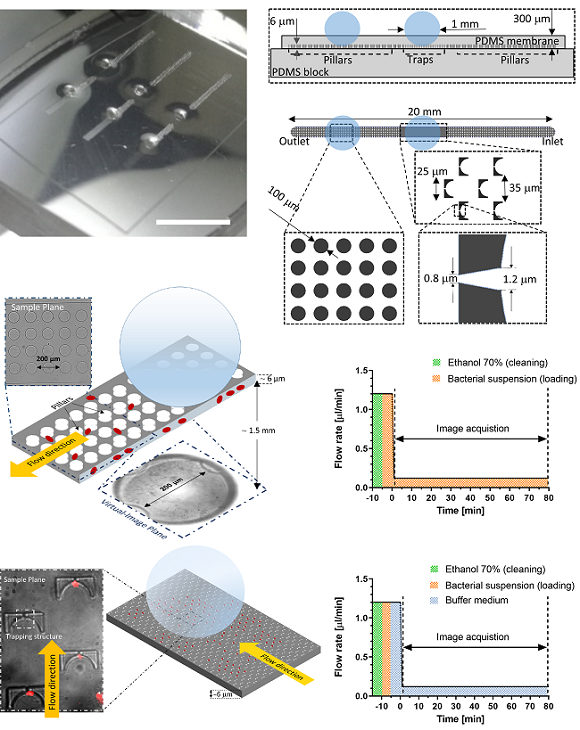 Structure and operation of the microfluidic chip.

TAGS: Biomedical Optics
Recent News
What's the hold up with heads-up?
Technology
Mental health in isolation
Community
Letter from the President: Through a glass, darkly
Community