"Sometimes you can do more with less: that's what optics is all about!"

"I am constantly trying to learn new things and improve my skills in various subjects," Arvid says. While he was pursuing his master's in engineering at the KTH Royal Institute of Technology in Stockholm, he obtained an optics internship at Bioaxial, an R&D company that designs and manufactures super-resolution modules. It was during this eight-month internship that he truly became immersed in optics, even co-authoring a paper that was presented at SPIE Photonics West in 2016.

Enjoy the interview with Arvid! 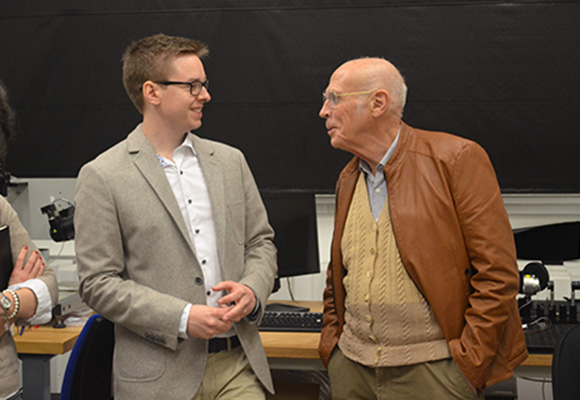 IN CONVERSATION: Lindberg and Svanberg chat during the traveling-lecture visit.

1. How did you become interested in the optics and photonics field? Was there a person who inspired you?

It definitely happened during my master's thesis internship at Bioaxial in 2015. While I was studying biomedical engineering at the Royal Institute of Technology, there was a job posted that involved developing STimulated Emission Depletion microscopy (STED) through an exotic phenomenon called Conical diffraction.

At the time, the 2014 Nobel Prize in Chemistry had been awarded to Eric Betzig, Stefan Hell, and William E. Moerner for work in super-resolution microscopy, with one of the techniques rewarded being STED, originally proposed by Hell. On top of that, STED was discussed in a great course by professor Jerker Widengren at KTH so it was a concept I knew about and was interested in.

Bioaxial was a new, dynamic startup in Paris. My optics background at the time was limited to one or two undergraduate courses, but I thought I'd apply for the job anyway. Needless to say, I got it! My supervisor was Clement Fallet, who has also been featured on SPIE's Faces of Photonics. While it was intense because I had to learn almost everything from scratch, it was a great experience. Optics is a fantastic field because you have the mix of theory and hands-on experiments. For example, sometimes you have to solder the electronics yourself and then spend weeks in front of a computer working with the code, trying to understand the images you took. It's quite varied-you never get bored!

At the end of the internship, Clement, the Bioaxial founder and CSO Gabriel Sirat, and I were discussing my plans for the future. I told them I'd probably apply for an engineering job in the area. They were both were surprised and said, "Wait, you are not doing a PhD?" This changed my perspective on research and my own future. Those months at Bioaxial sparked my interest in both optics and research. It is how I ended up in the Applied Optics Group at the PICM lab at École Polytechnique, where I am today.

2. Describe a memorable moment from an SPIE event or conference.

Definitely our traveling-lecturer event with Sune Svanberg, in January 2019. Sune is such an amazing, dynamic person with a big heart and so many stories to tell. He also happened to be a great friend of Gérard Mourou. On the day Sune visited, we gave him a tour around the lab in the morning, and my student-chapter colleagues and I showed him our research.

Then, we had lunch with none other than Gérard Mourou himself! Given the presence of Gérard, Sune agreed to do a special lecture about the Nobel Prize selection process. It's definitely a day I will remember. 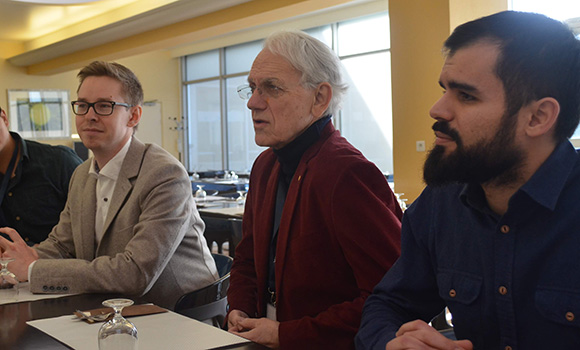 MEETING OF THE MINDS: Lindberg and student chapter colleagues having lunch with Mourou.

3. Explain your current research/what you do at your job. How does your work impact society?

I work with polarized light, specifically Mueller polarimetry, for biomedical applications. I focus on the instrumentation side. Our goal is to build a rigid endoscope, typically used for minimally invasive surgery. To remove a tumor in a normal surgical procedure, the surgeon will rely on his or her eyes to identify the margins of the tumor. This is a very difficult task. Because of the challenge, between 15-60% of surgeries end up failing to remove all of the cancerous tissues.

Mueller polarimetry has been shown to accurately identify multiple cancer forms in the lab, and it should work in patients. This is why we want a rigid endoscope capable of taking polarimetric images. The current challenge is to build an instrument that can be used in the hospital. Since Mueller polarimetry relies on polarization, it does not require additional chemicals or special light sources, so we could use the instrument in hospitals. However, it does involve miniaturization of the technology, so close collaboration with doctors is needed.

If we succeed, the way we detect cancer could be greatly improved.

4. What are you most excited to see in the future development of photonics?

I'm excited about the development of low-cost, everyday photonics. There is a whole section devoted to low-resource settings at Photonics West. It's amazing to think that sometimes you can do more with less, but, in my opinion, this is what optics is about!

One example is the incandescent light bulb. Now, we have LED light bulbs that are much more efficient and inexpensive. We also used to have copper wires, and now we have fiber internet. The list goes on and on. Optics is not only about new discoveries, but also about making things better and lowering the cost. I hope in the future we see more of this. I believe optics can have a great impact when you get outside the lab and into the real world. 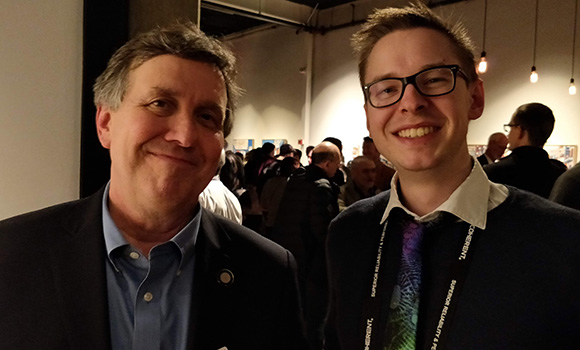 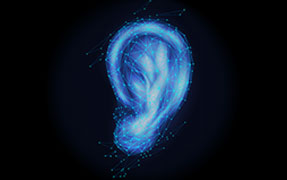