A celebration of an "accidental life"
10 May 2019
Technology, Community 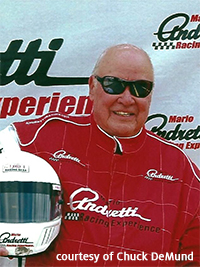 Often after friends or family would hear SPIE Fellow Charles "Chuck" DeMund tell of some event from his life, someone would say, "You ought to write a book." In 2014, he published a chronicle of his unique experiences, An Accidental Life, which included his insights into the Cold War and the development of photonics. Renowned for his photography skills, DeMund writes that the trip through his memory to write the book included going through "thousands of photographs."

DeMund, who played an instrumental role in the foundational strength of SPIE, passed away 9 May in his home in Waxhaw, North Carolina. A long-time SPIE Member, DeMund served on several committees, including many years as SPIE Treasurer, and two terms as SPIE President in 1973 and 1974.

Born 21 December 1932, in Evanston, Illinois, DeMund grew up in Phoenix, Arizona. His career in optics began after what he described as a "false start in broadcasting." His "real career" began in the Astronautics Division of Convair (part of defense contractor General Dynamics) in San Diego with an entry-level job in their motion picture department. There, he learned photo instrumentation as well as documentary film making.

By capturing images in outer space and the depths of the ocean, DeMund had made an undeniable impact on the field of optical sciences and photonics by the time he retired in in 1992, after 36 years with General Dynamics. But retirement didn't mean an end to work: he remained active in SPIE and pursued diverse hobbies ranging from race cars and antique autos to drone photography. 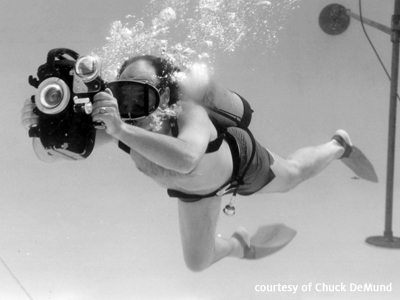 "When I joined as CEO, Chuck was SPIE Treasurer, and all through my tenure he was a valuable member of the Financial Advisory Committee," says former SPIE CEO Eugene Arthurs. "Chuck was president of SPIE for two years, but constantly vigilant about SPIE's finances for six decades -- he was a true fiscal conservative. He showed his commitment to SPIE by putting up his own money to keep SPIE going (as did Jack Kiel) in the early days when the Society was struggling. Chuck assertively questioned proposed spending, in each case rightly demanding a well-based rationale, often providing experience-based wisdom. There was one constant exception: Chuck supported any and all SPIE spending on students and education. He believed strongly in how important education was to all our futures, advocated for it, and put both energy and resources into supporting it."

Arthurs adds that DeMund was a unique individual and his some-times crusty demeanor concealed a warm and generous heart. "SPIE and the optics and photonics community are the better for his many contributions," says Arthurs. "I am hugely grateful for his guidance and have lost not only a colleague but a steadfast friend." 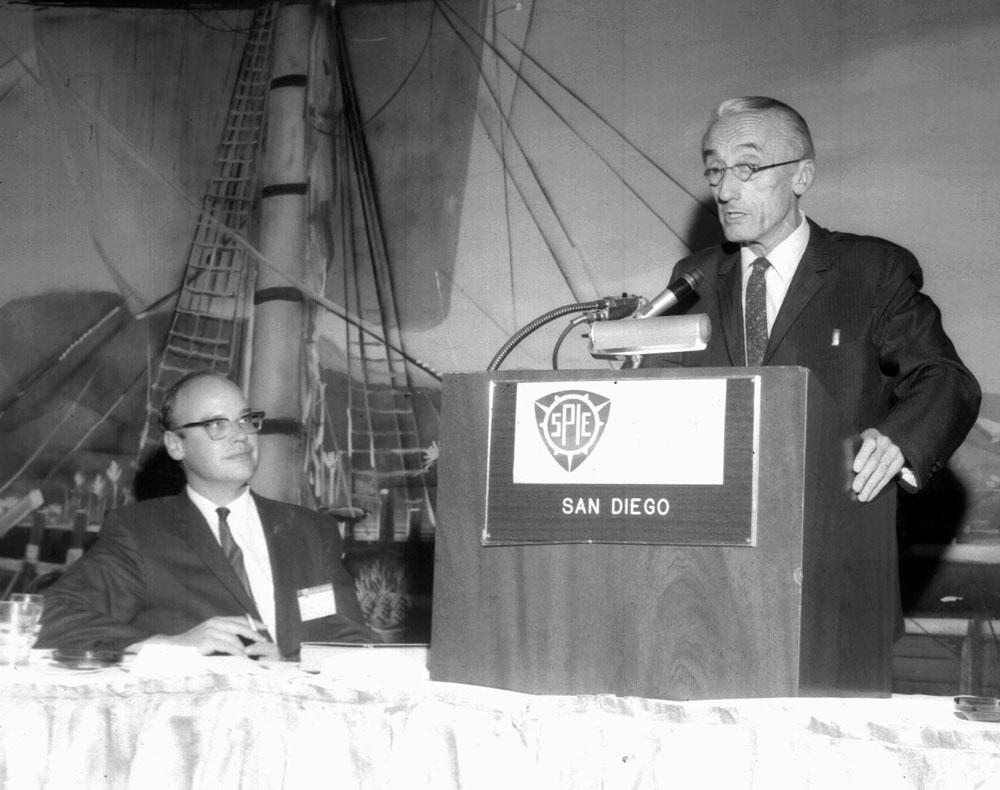 SPIE Fellow and 2019 SPIE President Jim Oschmann notes that DeMund was generous with both his time and money. "Chuck was a huge influence on SPIE," says Oschmann. "Most recently, he led the fundraising effort for the Joe and Agnete Yaver Memorial Scholarship, including having his family foundation as the primary independent contributor. He felt that SPIE owed much of its success to Joe and Agnete - we also owe much of our success to Chuck DeMund and his long service to the Society." 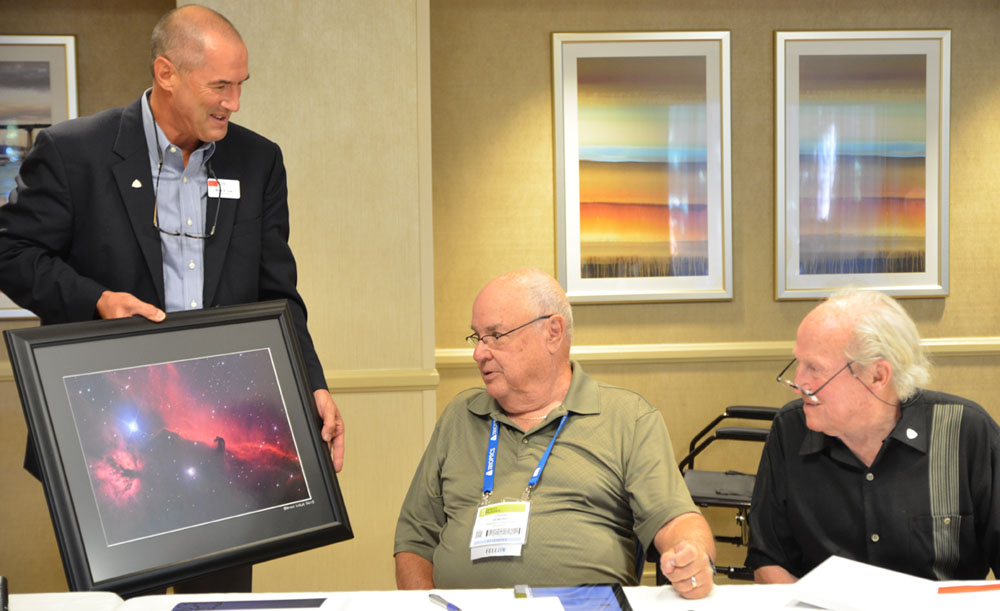 DeMund Foundation
In 1947, DeMund's father, Herman, established the DeMund Foundation to provide financial assistance at universities throughout the country through scholarships and grants. As president of the Foundation, Chuck DeMund continued his father's idea of contributing to public education. The University of Arizona (UA) is fortunate to be among its longtime beneficiaries, with prior grants totaling nearly a half-million dollars.

"Chuck's ties to the James C. Wyant College of Optical Sciences started seven years ago when I found him on LinkedIn and learned about his early investments with SPIE," says Kaye Rowan, senior director of development at the James C. Wyant College of Optical Sciences at UA. "We met at Photonics West for coffee and I learned all about his fascination for optics and his commitment for higher education. Those two passions bridged to the DeMund Scholarship at the College and was initially awarded annually; two years later, it was endowed for permanent awards. His father would have been proud of the differences Chuck made in this world by his leadership with the Foundation. While students at the College have - and will forever - benefit from Chuck's sincere interest in student achievement, there are many of us here who will also miss a dear friend."

DeMund also led the Foundation to support the Winter School and Workshop at UA, says Thomas L. Koch, dean of the James C. Wyant College of Optical Sciences. "Chuck was a truly remarkable leader and friend to the field of optics - as a mover and shaker, as an enthusiastic champion of people, and especially as a champion and supporter of new students entering the field," says Koch. "All of us here at the College will miss him tremendously."

James Wyant, who has also donated a great deal to the College, adds, "Chuck was a wonderful and amazing person with many interests, none of which were more important to him than SPIE and supporting young students."

A tribute to DeMund is planned for September at UA as part of the Fall Scholarship program.

A legacy remembered
Jim Pearson, Executive Director of the Florida Photonics Cluster, and special consultant at CREOL, The College of Optics and Photonics, says he met DeMund while serving on SPIE committees in the late 80s and early 90s, but "really" got to know him when Pearson served as SPIE Executive Director from November 1993 to April 1999.

"In early 1998, SPIE and OSA formed a Joint Task Force (JTF) to explore possible ways for the societies to cooperate more and possibly even merge into one society," says Pearson. "Chuck was one of the JTF members and was a strong voice who made many contributions to the work of the JTF. Chuck and I disagreed, sometimes strongly, on some matters, but always found it was important to respect the other person even when disagreeing."

Pearson adds that, while the DeMund Foundation, SPIE, and DeMund's many friends, relatives, and professional colleagues will certainly miss him, "his memory and legacy will be with us for many more years."