The largest black-hole collision to date is considered to be the most powerful, most distant, and most perplexing
01 October 2020
Karen Thomas
Technology

"We've never seen something like this before," says Evan Goetz, a research associate at the University of British Columbia's physics and astronomy department. "This is the first time any type of gravitational signal like this has been measured."

Occurring about seven billion years ago, this cataclysmic event offers researchers insights into the birth of one of the Universe's most elusive objects - black holes.

Detailed in a paper published last month in the journals Physical Review Letters and Astrophysical Journal Letters, the event marked the merging of two black holes roughly 85 times and 66 times the mass of the Sun. (A "solar mass" is the mass of the Sun as a unit of measurement). Their melding, now the largest black-hole collision on record, created a black hole of nearly 150 solar masses, producing the gravitational wave picked up by LIGO and Virgo.

"Everything about this discovery is mindboggling," says Simon Portegies Zwart, a computational astrophysicist at Leiden University in the Netherlands. Of particular interest, he notes, is the size of this find: dubbed GW190521, the collision and its outcome represent what scientists have for years considered an astronomical holy grail - a black hole of intermediate mass.

All previously discovered black holes fit into two categories: stellar-mass black holes, which measure tens of solar masses, and supermassive black holes, such as the one at the center of the Milky Way galaxy, that have masses ranging from hundreds of thousands to billions of times that of our Sun. Now, the detection of GW190521 confirms the existence of intermediate mass black holes. 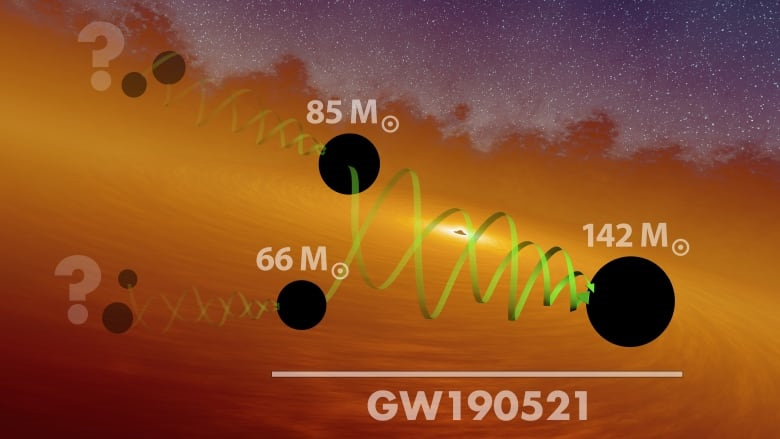 This artist's drawing illustrates a hierarchical scheme for merging black holes. The LIGO and Virgo detectors recently observed a black hole merger with a final mass of 142 times that of the sun, making it the largest of its kind observed in gravitational waves to date. The event is thought to have occurred when two black holes of about 66 and 85 solar masses spiralled into each other and merged. Credit:LIGO/Caltech/MIT/R.Hurt (IPAC)

To find GW190521, mountains of data had to be analyzed to confirm its astrophysical nature. When gravitational-wave merger events were previously reported, the LIGO and Virgo detectors registered several cycles of compact objects in space orbiting each other before colliding.

The signal for the massive GW190521 rose above the lowest sensitive frequencies of the detectors just tenths of a second before the merger, making it a challenge for the detectors to distinguish the sound from transient noise, which can also appear as short bursts in the data.

"We find that GW190521 is the first conclusive observation of an intermediate mass black hole," says Goetz, who has worked with LIGO for 15 years. "There's been no observational evidence prior to this discovery."

Goetz adds that more observations of this type of signal are needed -- as "mergers that yield intermediate-mass black holes will help us to understand ... how they're formed."

While black holes play a key role in many aspects of astrophysics, science is just now beginning to understand more about the Universe with these phenomena. Studying black holes could help us understand how we got here, as they are a key in the creation of much that already exists.

Breakthrough of 2019: Darkness made visible

Why the Milky Way's black hole is a picky eater

The advanced LIGO detectors in the era of first discoveries