Anita Ho-Baillie is the John Hooke Chair of Nanoscience at the University of Sydney and an adjunct professor at the University of New South Wales. She is well known for her integrated photovoltaics research as well as for her achievements in setting solar-cell energy efficiency world records in various categories.

Ho-Baillie will be a plenary speaker at SPIE Optics + Photonics 2021, where she will discuss the challenges and opportunities associated with perovskite solar cells.

Perovskites have been a hot research topic for many years now. Can you describe what makes them such interesting material in general and, more specifically, for solar cells?

Metal halide perovskites represent a class of crystalline compounds that have a similar structure as naturally occurring calcium titanate and can be described by a general formula of ABX3 where A is a monovalent cation, B is a divalent metal cation, and X is a halogen anion. For solar cells, typical materials for the A site are methyl ammonium CH3NH3, formamidinium (NH2)2CH, caesium (Cs). For the B site, metals such as lead (Pb) and tin (Sn) are typically used. For the X site, iodide (I) and bromide (Br) are typically used.

What makes metal halide perovskites interesting is that they are photoactive and have very good absorption coefficients. This means we can make a solar cell using a very thin layer of perovskites. Perovskite solar cells are less than 1um thick, which is 200 times thinner than the incumbent silicon solar cells. Also, they can be manufactured using solution processes and at much lower temperatures (100-200 degrees Celsius) compared to those for silicon solar cell manufacturing (a few hundreds to a thousand degrees Celsius). The perovskite precursors can be dissolved in solvents and be printed, and coated to form solar cells on flexible surfaces, while rigid silicon is not bendable. The much higher power-to-weight ratio can be exploited for non-conventional applications.

Because these cells are so much easier to make in the lab compared to silicon cells, there has been a huge academic following of this technology in photovoltaic R&D. The first perovskite device in 2009 was 3.8% efficient. Now the best cell is 25.5% efficient - close to silicon's lab record of 27.6%. It took people 40 years to double the efficiency for silicon solar cells; for perovskites, it only took 10 years.

Despite their efficiency gains, they have not yet taken over the markets and become commercialized like other technologies. What are some of the downsides of perovskites and any related roadblocks for mass production and commercialization?

The use of lead, although tiny (much lower than the amount in lead-containing-solder used in silicon solar modules), can be a hindrance - even the potential toxicity of lead is a consideration. Another barrier is that unprotected perovskite easily degrades through heat, moisture, and humidity. Silicon technology has set a very high standard by providing a 15-year product warranty and 14% degradation performance warranty of 25-years allowing for 2% degradation in the first year followed by 0.5% degradation each year. 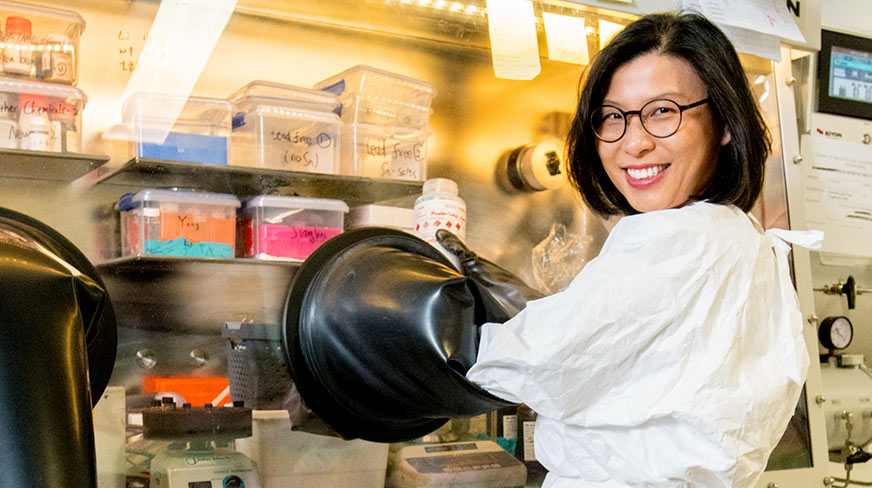 An article in Clean Technica notes your team's accomplishments with developing perovskite cells that can stand up to heat and humidity. How are you able to do this and what is the significance of this achievement?

Well, we first looked at how perovskites degrade when they are not protected and found that they release gasses when they break down. We were able to identify the species and the extent of outgassing with high specificity using gas chromatography and mass spectrometry. This technique is commonly used for pharmaceuticals, forensics, soil testing, and even screening athletes for doping, but has never been used for studying perovskite solar cells. We found that the outgassing actually drives the decomposition, and it can be suppressed.

So, we developed a very simple but effective method of encapsulating the cell between two pieces of glass with a polymer (e.g., the types used in double-glazing windows) which has to be done in a way that the gas has nowhere to go when the cells want to outgas under thermal stress. Our encapsulation method does not require an extra layer of metal oxide as some other works do and does two things - supresses outgassing and stops moisture ingress. Not only did these encapsulated cells pass the industry-critical heat and humidity tests set for solar panels by the International Electrotechnical Commission, they exceeded the requirements for damp heat and humidity freeze tests.

What do you see as the future of this technology?

There is a great opportunity to develop perovskite-based tandem technologies as the bandgap of perovskites can be tuned by changing their chemical compositions. Tandeming involves stacking a higher bandgap solar cell onto a lower bandgap solar cell such that each cell will convert light from the different parts of the solar spectrum more efficiently. The prospects of multijunction tandem cells are promising as energy efficiency limit jumps from 33% for a single junction cell to 45% for double junction tandem and 51% for triple junction tandem.

How would you invite young science students to consider working with development of solar energy technologies?

Developing next generation solar cell technology and reducing our reliance on fossil fuels allows you to be part of a solution to tackle the biggest threat to humanity: climate change.

What led to your interest in developing clean-energy solutions?

In my second year of undergraduate study, we were tasked to measure the performance of a solar-powered-water pump. It was my first time seeing how a solar panel works when it is hooked up to a water pump sourcing its energy from the Sun for free. The only way to stop it was to cover the solar panel with a piece of cardboard. I was hooked!