Low-coherence interferometry is used in combination with a hand-held probe for purposes of precision metrology and quality control.
29 July 2016
Michael Marcus

Automotive head-up display (HUD) systems include a projector that projects light onto the windshield. This light is then reflected into the driver's eyes and appears as a virtual image on top of the hood of the car, at a comfortable viewing distance from the driver.1 The image source of the HUD projector, however, emits multiple rays of light at different angles from a common origin. For example, the light that is reflected into the driver's eyes from the inner and outer air interfaces of the windshield creates the virtual image and a ghost image, respectively, and results in a double image. The windshield comprises laminated safety glass made from two layers of glass that are bonded together with one or more layers of polyvinyl butyral (PVB). Most windshields are not simple flat structures, but include slight curvatures in both the horizontal and vertical dimensions. The ghosting problem is illustrated in Figure 1(a) for standard windshields that have no wedge angle. The green and red lines show the paths of light from the image source, reflecting off the inner and outer windshield–air interfaces, respectively, into the driver's eye to form the virtual and ghost images. The virtual and ghost images do not overlap, therefore, the image is blurred, as shown on the left of Figure 1(a). 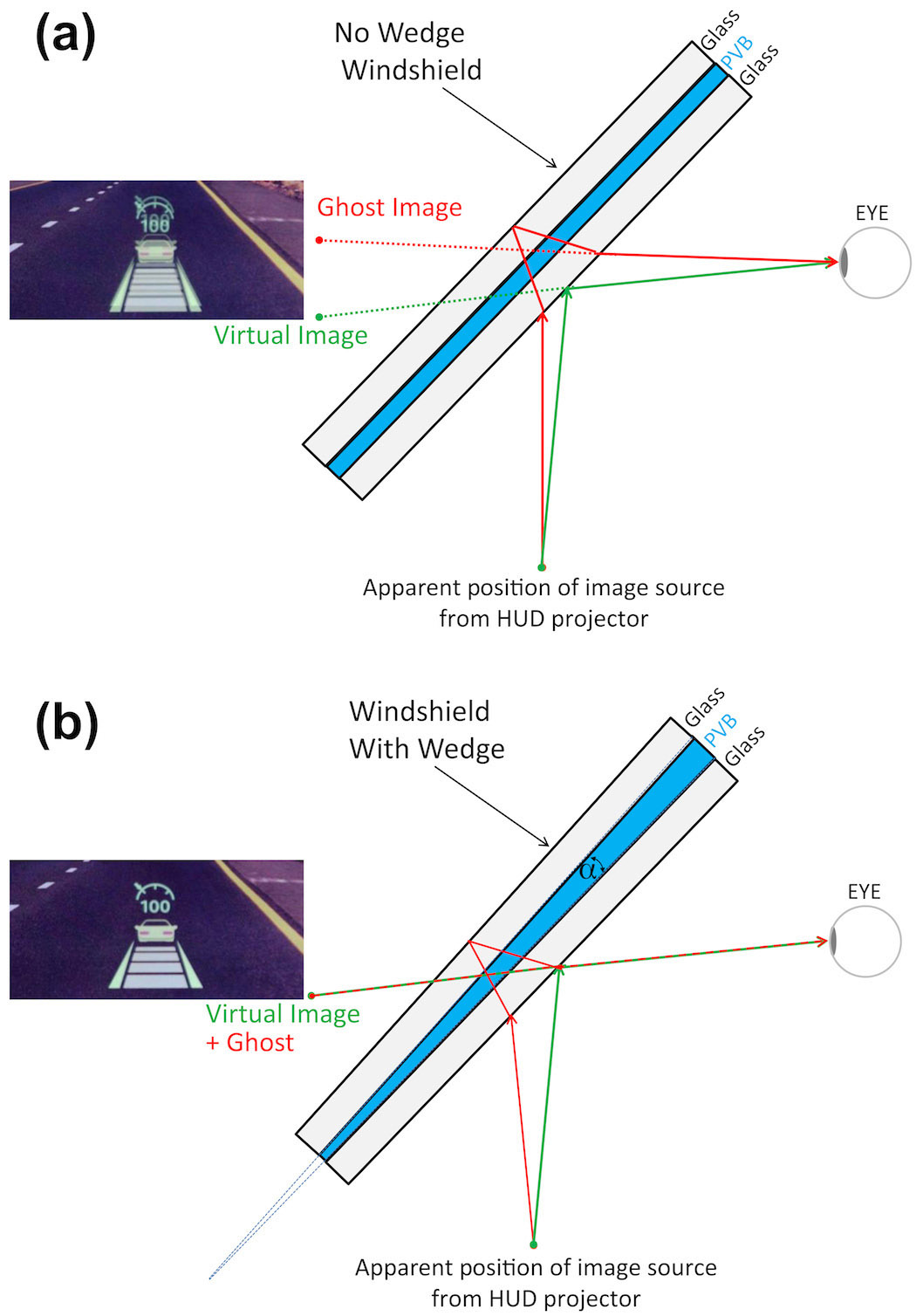 To eliminate this ghosting effect, the angular separation between the virtual and ghost images must be less than the angular resolution of the human eye, which is about 0.2mrad. A PVB interlayer with a small, constant wedge angle is normally used to eliminate the ghost image for a driver at a defined location.2 The optimum wedge angle is dependent on the location of the driver's eyes, as well as the mounting angle, thickness, and curvature of the windshield.3 This use of a PVB interlayer with a small wedge angle causes the virtual and ghost images to overlap, resulting in a sharp image, as shown on the left of Figure 1(b). A constant wedge angle, however, will only have an optimal effect for a single location of the driver, and taller or shorter drivers will still experience ghosting. To overcome this problem, manufacturers are starting to produce windshields with a wedge angle that varies as a function of the vertical position on the windshield.4, 5 It is therefore important to develop methods for determining the wedge angle and variations in the thickness of the windshield.

In this work, we demonstrate that low-coherence interferometry can be used to measure the windshield thickness and wedge angle profiles of a HUD system simultaneously. We have performed simultaneous measurements of the thicknesses of all the layers in laminated glass windshields (with a wedge angle) using the Lumetrics, Inc. trademarked OptiGauge II, which is a commercially available dual low-coherence all-fiber-optic interferometer. We then calculated the total thickness of the layers and the local wedge angle, as a function of the position. Our interferometer includes a superluminescent LED interferometer (with a center wavelength of 1310nm) for measurement in combination with a built-in laser interferometer for continuous distance calibration. A pair of fiber stretchers is used to vary the path length of the interferometer. Constructive interference occurs when the path lengths of the two arms of the interferometer are either equal or differ by the optical thickness—the product of the group index of refraction and the physical thickness—between any pair of optical interfaces in the sample. Further details concerning the operation and performance of the OptiGauge II are available elsewhere.6–9

We used a hand-held optical probe, which we have developed, to scan over the windshield surface while keeping all the relevant optical interfaces in focus. During these scans, the hand-held probe is kept normal to the surface of both flat and curved windshields, and at a constant distance from the surface. The distance to the surface can be adjusted so that all the optical layers of the windshield can be observed while scanning across the surface. Figure 2 shows the hand-held probe being used to measure the windshield thickness profile of a 2007 Chevrolet Corvette equipped with a factory-installed HUD system. A video of the procedure is also available.10 The optical fiber cable for our hand-held probe can be up to a few kilometers in length and is attached to our interferometer during measurement. In addition, the probe is moved manually at an approximately constant velocity from the bottom to the top of the windshield during the measurements. The distance scale in a graph of thickness versus distance is therefore only approximate. The thickness profile of each layer within the measured windshield is shown in Figure 3. The change in thickness of the PVB layer as a function of distance indicates that a small wedge angle is present, as is required for the HUD. 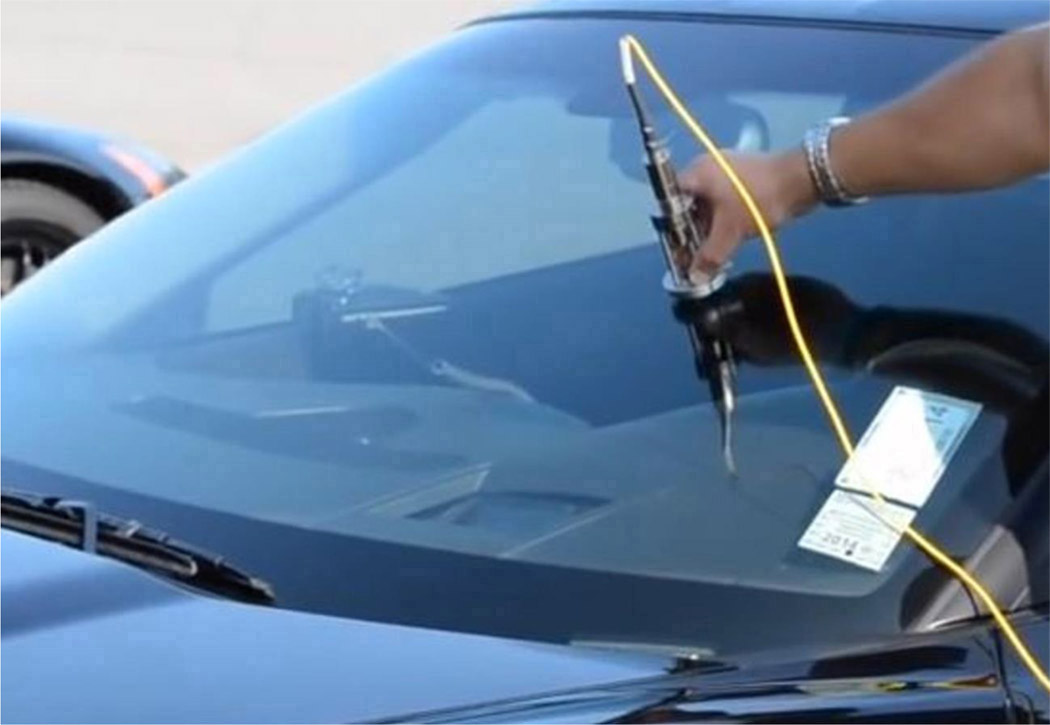 Figure 2. The windshield of a 2007 Chevrolet Corvette equipped with a five-layer HUD is scanned using our hand-held probe. 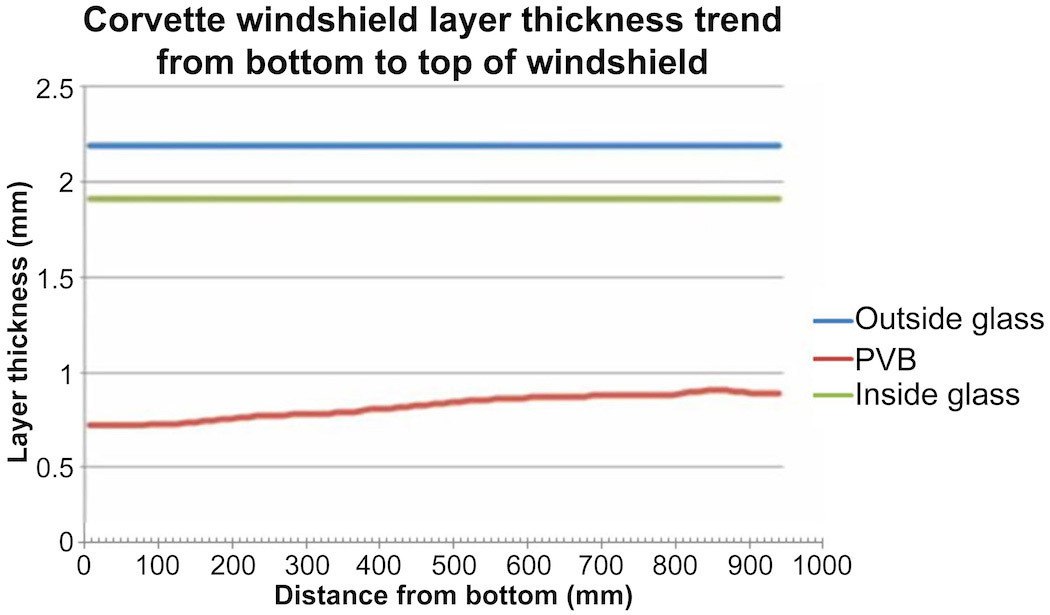 A snapshot of the OptiGauge II measurement screen, obtained during measurements of a five-layer acoustic HUD windshield, is shown in Figure 4. The horizontal axis shows the difference in optical path length between the arms of the interferometer and the signal peaks indicate the locations of the optical interfaces in the windshield. We made 100 repeated measurements of the thicknesses of the layers in this windshield. The standard deviations of these measurements varied from a maximum of 0.050μm—for the acoustic layer, i.e., the thinnest layer (with a thickness of 144.782μm)—to a minimum of 0.011μm for the top glass layer (with a thickness of 2125.883μm). For these measurements, the refractive index of the acoustic layer was 1.476 and that of the glass layer was 1.518.

The results of a scan in which we moved the hand-held probe from the bottom to the top of the same five-layer acoustic HUD windshield are shown in Figure 5(a). The thickness versus the approximate distance from the bottom of the windshield is shown for all the layers individually, as well as the total for the PVB interlayer. To obtain this quantitative data, we attached the hand-held probe to a transport stage. We moved this stage at a constant speed of 5mm/s, to give a spacing of 0.1mm between successive data points. The layer thickness data for the same windshield, over the region between 225mm and 525mm from the bottom edge (i.e., where the wedge angle in the PVB interlayers is constant) is given in Figure 5(b). This region of the windshield includes the location of the HUD image. We found that the wedge angle of the combined acoustic and PVB layers was 0.588mrad, as calculated from the slope of the best fit line for all the data points. The standard deviation was ±0.011mrad, as calculated from the local slopes using sets of five adjacent locations. 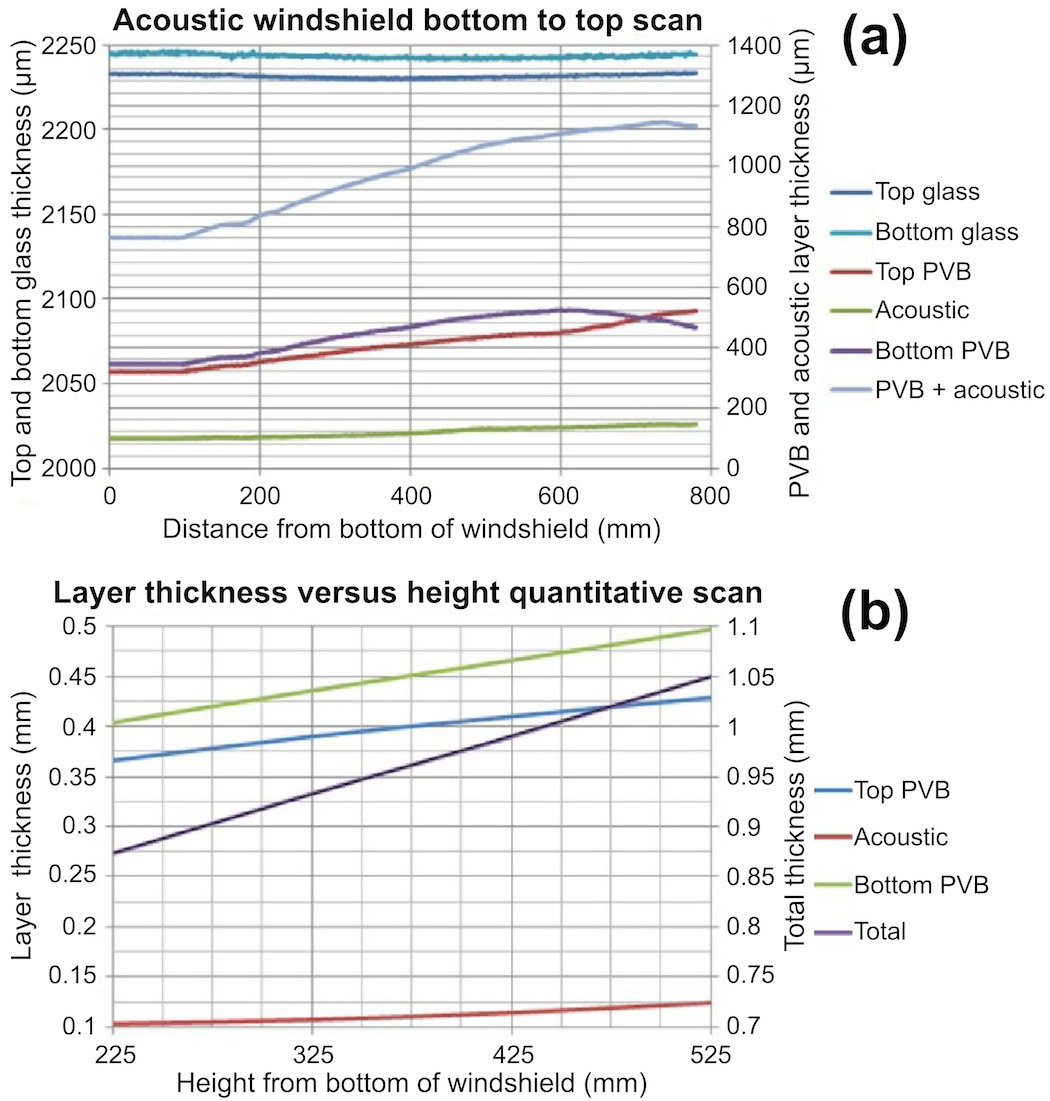 Windshields that are optimized for HUDs have very tight tolerances for uniform thicknesses of the glass layers and for wedge angles in the laminated PVB layers. Each model of car has different requirements for the wedge angles, therefore, precision metrology and quality control are required. We have demonstrated that the OptiGauge II interferometer, together with our hand-held probe coupled to a transport stage, can provide the required capability for measuring the thickness and angle profiles of individual layers in a windshield. Our next-generation probe will have built-in position encoders to provide quantitative position information during a scan, without requiring a separate transport mechanism. We also plan to assess windshields with variable wedge angles during their manufacture and assembly.

Michael Marcus joined Lumetrics in 2012 after spending 34 years at Eastman Kodak Company. He has a wide range of experience in the development of metrology systems, imaging and display systems, and sensors for the monitoring and control of manufacturing processes (including the technology used in the OptiGauge). He is the holder of more than 100 US patents and has more pending. He is also a SPIE Fellow and has served on 16 conference committees, edited 12 SPIE conference proceedings, and published 29 proceedings articles. He was chairman of the Fiber Optics Technical Group from 1994 to 2007, and has taught short courses on various types of fiber optic sensors. 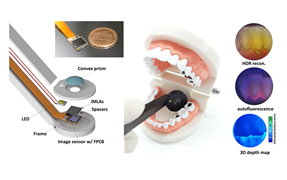 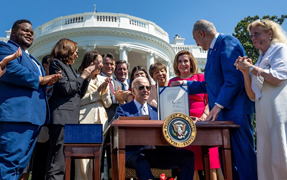 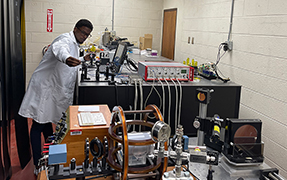