With telescopes that have apertures approaching 100m in diameter, it will be possible to conduct meaningful statistical searches for life on nearby extrasolar planets.1, 2 Such studies will be possible for about 100 of these so-called exoplanets that are closest to Earth, and many of which are Earth-like in nature. For example, the detectability of the thermal signature of advanced Earth-like life improves with increasing telescope diameter and coronagraphic sensitivity (see Figure 1). All such optical systems, however, depend on the arrangement of subwavelength-accuracy reflective elements within tightly controlled subaperture assemblies. At present, the largest operating optics in the world are the 10+m-diameter Keck3 and Gran Telescopio Canarias4 observatories that are used for astronomy. Their meter-scale and highly segmented primary mirrors have become a template for the largest optical systems currently being designed or built. According to these design principles, however, if such optical systems are much larger than 40m, they may become prohibitively expensive or technically unfeasible. The mass (and cost) limitations of Keck-era segmented mirrors are a consequence of the mechanical stiffness required to maintain the wavefront shape across the overall primary optical surface. 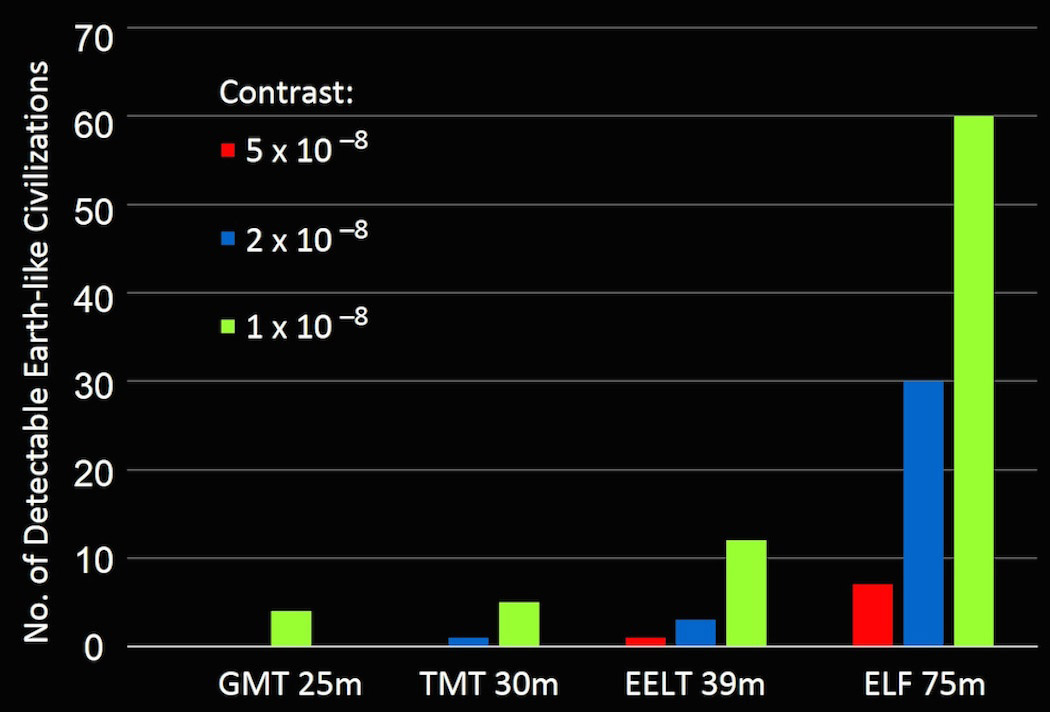 Figure 1. The number of potential exo-life detections versus telescope size and coronagraph contrast sensitivity (indicated by color). The telescope aperture for four different projects—the Giant Magellan Telescope (GMT), Thirty Meter Telescope (TMT), European Extremely Large Telescope (EELT), and Exo-Life Finder (ELF)—is given in meters and shown on the horizontal axis. These results correspond to the possible detections of radiated thermal power from advanced Earth-like civilizations on exoplanets within 60 light years of the Sun. The assumptions for these calculations have been detailed previously.1

By reducing the field of view, and taking advantage of an in-field point-like light source (e.g., a star or laser beacon), it is possible to reduce the moving mass of the optomechanical system by more than an order of magnitude. The corresponding active systems can also benefit from information technology improvements (i.e., following Moore's law). Unsurprisingly, this approach is seen in the latest generation of radio telescopes.5 Furthermore, the computing power necessary to control a 100m-scale active structure, which is subject to atmospheric wavefront distortion, is available today.

As part of the Colossus project,6 we are in the process of developing practical solutions for large optical systems in which we use different design principles than are used for Keck-like telescopes. Our hierarchical optical solutions can be used to effectively replace a mirror's stiffness-generating mass with 3D-printed ‘electronically stiff’ metamaterials. In this way, we can create larger, lightweight, subwavelength-scale, and smooth optical surfaces. In our Colossus design the wavefront errors are measured and controlled within the telescope primary and secondary mirror optics rather than in post-focus adaptive optics. In addition, the material stiffness of the telescope's optical support structure is relaxed to match or exceed the inherent large-scale terrestrial atmospheric-induced wavefront errors. With these strategies we can reduce the net moving mass of a large telescope from 2000 to 150kg/m2. Our technology also means that the wavefront errors introduced by the highly segmented and dynamic mirror edges intrinsic to Keck-era telescope optics can be avoided.

In our Colossus studies, we have found that to achieve a scalable optical design requires an ensemble of off-axis parabolic surfaces.7 For the case of a 100m-scale telescope, we used a primary optic focal distance of about 50m. In addition, we found that maximizing the subaperture diameters decreases the overall diffractive light scatter and the complexity cost of the active system. With 8m-diameter subapertures, the corresponding secondary optics are only a few centimeters across and are small enough to allow active control of the wavefronts from each off-axis subunit of the optical system. Our optically fast parabolic optics require a narrow field of view that is less than about 20 microradians. With the current technology for secondary mirror adaptive optics, each subaperture can provide a diffraction-limited wavefront at the parent Gregorian focus. For a Colossus design with 59 subapertures, we have demonstrated how multicolor ‘speckle’ images of a star can be used to determine the low-order subaperture phase errors (under realistic atmospheric seeing conditions and with a relatively ‘floppy’ mechanical structure).8

Although the primary optical surface in the Colossus design is only piecewise parabolic, the wavefronts from individual off-axis parabola segments are aligned by the small secondary elements. This means that the full-aperture wavefront errors can be effectively minimized while maximizing the system on-axis point spread function (PSF). Since the subapertures perform interferometrically, their phases can also be controlled to minimize the overall PSF at off-axis field points. This ‘dark-spot’ interferometry allows the telescope to directly perform as a coronograph (i.e., to observe faint sources near a bright central star). We have successfully demonstrated that synthesized dark spots can be 108 times fainter than the on-axis PSF.6, 8

We have generated detailed Colossus telescope concepts (see Figure 2) in collaboration with Dynamic Structures Ltd (an organization that designs and builds some of the world's largest telescopes). Through these efforts we have shown that progressing from conventional, abrasively polished optics to thin, active, glass-sandwich optics can reduce the total mirror mass (including passive supports) from 500 to 50kg/m2. These mass savings translate to an order of magnitude decrease in overall telescope mass and cost. In our study we have also demonstrated that mirrors can be fabricated from force-sensor-actuator elements printed onto about 10mm-thick slumped glass-sandwich elements of fire-polished glass. In addition, we find that surface shape calibrations (obtained with an in-field point source) could be used to maintain the diffraction-limited subapertures, despite the ultrathin optics. 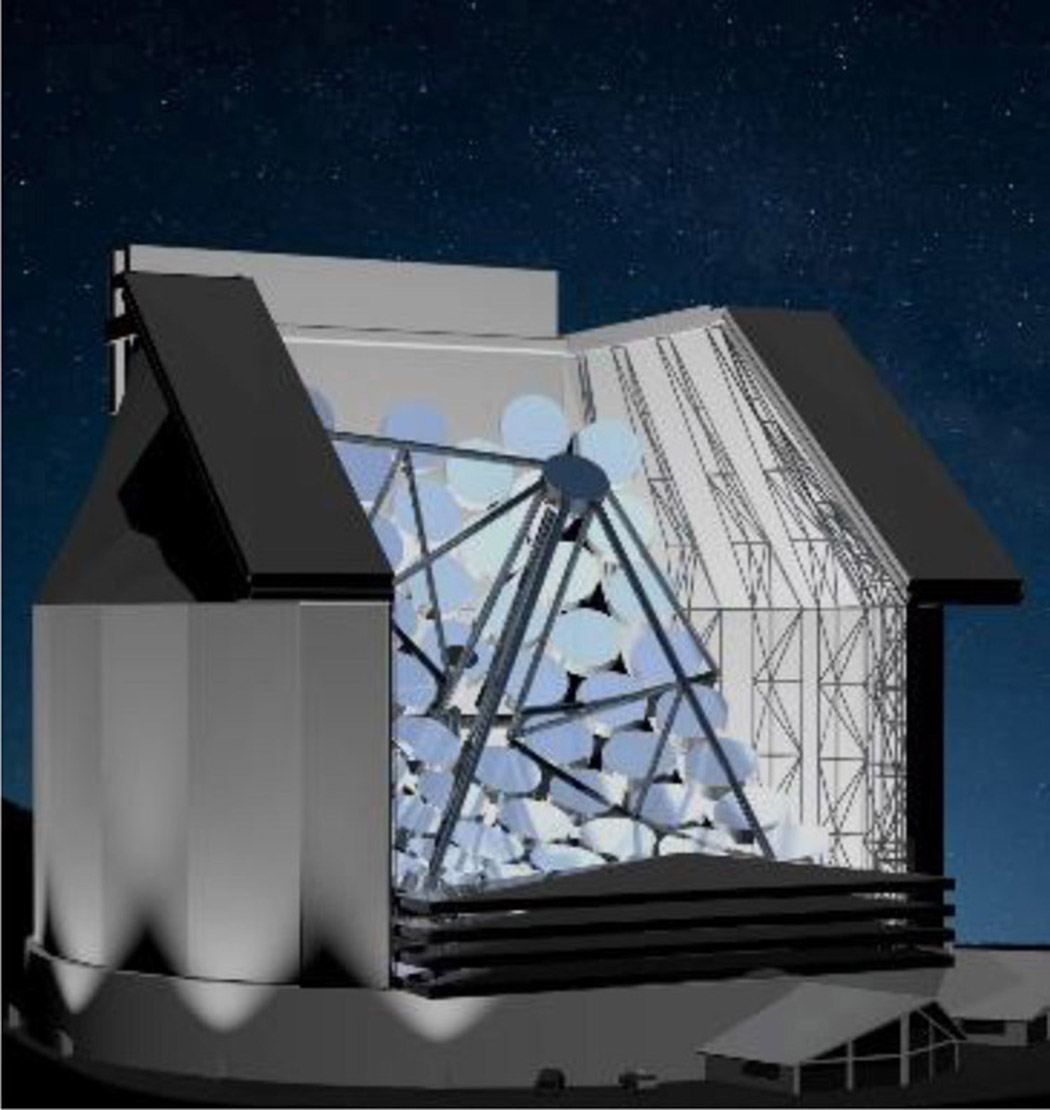 Figure 2. Illustration of the 75m Colossus telescope concept, which is based on independent 8m off-axis subapertures (blue circles) that are phase-corrected by small, independent elliptical secondary optics.

In summary, as part of the ongoing Colossus project, we are developing novel optical systems for large (about 100m-scale) telescopes. With our design principles we can effectively reduce the mass and cost of building such telescopes and can overcome the limitations of Keck-era instruments. We are now in the process of empirically proving our technologies ‘on-sky,’ beginning with smaller optical systems. For example, the Colossus concept is being used in the PLANETS telescope.9 This is a thin-mirror, 1.9m off-axis telescope that is currently being constructed for planetary and exoplanetary studies. It will be the largest aspect ratio mirror yet used for astrophysical observations. MorphOptic Inc.10 are also in the process of building low-mass active metamirrors for laboratory and on-sky demonstration of the Colossus designs.

Caisey Harlingten and Dynamic Structures Ltd provided partial support for the Colossus telescope study. We are grateful to Sho Okano, Takeshi Sakanoi, Joe Ritter, Isabelle Scholl, Ian Cunnynham, as well as the Colossus consortium of scientists and engineers for their continued efforts to refine the concepts described here. The PLANETS telescope is supported by a consortium of Japanese, Hawaiian, German, and Brazilian astronomers and engineers. A European Research Council Advanced Grant (HotMol11) supports this study of exoplanets and exolife. MorphOptic Inc. is partially supported by the University of Hawaii (XLR8UH fund) Hawaii.

Jeff Kuhn was director of the Institute for Astronomy for a decade and now leads the Colossus project. He has written hundreds of articles on a broad range of astrophysical topics, and he has designed, built, or contributed to many optical instruments and telescopes, including the Daniel K. Inouye Solar Telescope (DKIST) and the Giant Magellan Telescope.

Svetlana Berdyugina is the head of KIS. Her team was the first to observe reflected light directly from an exoplanet. She has pioneered novel areas of molecular and biopigment spectropolarimetry in astrophysics and astrobiology. She has also won a European Young Investigator Award and a European Research Council Advanced Grant.

David Halliday was appointed to the Order of Canada for his leadership in design and construction of large telescopes, including the Canada France Hawaii Telescope, Thirty Meter Telescope (TMT), and European Southern Observatory. He is currently the senior advisor for the TMT enclosure design team. He is also the honorary chairman of Dynamic Structures, chief executive officer of Innovative Optics, and adjunct professor of civil engineering at the University of British Columbia, Canada.

Maud Langlois is an expert in extreme adaptive optics and the instrument scientist of the IR dual imaging and spectrograph mode/spectro-polarimetric high-contrast exoplanet system for the Very Large Telescope (VLT), which is used for direct detection of exoplanets. She has conceived, developed, integrated, and tested (on-sky) several innovative instruments for the VLT, Gemini telescope, Large Binocular Telescope, Multiple Mirror Telescope, and the New Solar Telescope (NST), as well as the first multi-conjugate adaptive optics for solar telescopes.