Information storage based on the introduction of nanostructures into fused quartz using a femtosecond laser could ensure all that we have learned will not be forgotten.
11 March 2016
Peter Kazansky, Ausra Cerkauskaite, Martynas Beresna, Rokas Drevinskas, Aabid Patel, Jingyu Zhang and Mindaugas Gecevicius

Compared with paper or clay, digital data storage is not very durable. As such, securely storing large amounts of information over even the relatively short timescale of 100 years—comparable to the human memory span—is a challenging problem.1 Conventional optical-data-storage technology of the type employed in CDs and DVDs has reached capacities of hundreds of gigabits per square inch. However, the lifetime of this media is limited to a decade as a result of unavoidable degradation suffered by the data layer. More futuristic DNA-based data storage is capable of holding hundreds of terabytes (Tb) of data per gram, but its durability is limited.2

The concept of storing data optically in the bulk of non-photosensitive transparent materials (such as fused quartz, which is renowned for its high chemical stability and resistance) via femtosecond-laser (fs-laser) writing was first proposed and demonstrated in 1996.3, 4 This method allows for high-capacity optical recording by multiplexing new degrees of freedom (e.g., intensity, polarization, and wavelength). This development in data storage is based on the introduction of gold or silver nanoparticles, which are embedded within the material.5 The plasmonic properties of these nanoparticles can then be exploited.6, 7 More recently, polarization-multiplexed writing has been demonstrated by using self-assembled nanogratings, which are produced via ultrafast-laser writing in fused quartz.8, 9 These nanogratings, which comprise 20nm-thick lamina structures embedded within the material,10–12 are resistant to high temperatures.13 Despite several attempts to explain the physics of this peculiar self-organization process, the formation of the nanostructures remains a mystery.14, 15

Based on this behavior, we have developed a method of data storage that makes use of three spatial and two optical dimensions.16 On the macroscopic scale, the self-assembled nanostructures behave as uniaxial optical crystals with negative birefringence. The alignment of the nanogratings gives rise to optical anisotropy (a form of birefringence) of the same order of magnitude as positive birefringence in crystalline quartz.

In conventional optical storage such as DVDs, data is stored by burning tiny pits in one or more layers of the plastic disc, thereby making use of three spatial dimensions. We have also exploited two additional (optical) dimensions. When the data-recording femtosecond laser marks the glass, it makes a pit with a nanograting. This nanograting produces birefringence that is characterized by two additional parameters. The slow-axis orientation introduces a fourth dimension, and the strength of retardance—defined as a product of the birefringence and the length of the structure—forms a fifth dimension. These two parameters are controlled during recording by the polarization and light intensity, respectively. By adding these additional optical dimensions to the three spatial coordinates, we achieve 5D optical data storage: see Figure 1.

Figure 1. 5D optical data storage, written in fused quartz using a femtosecond laser. Three spatial dimensions and two optical ones (the slow-axis orientation and the retardance) are exploited. Each voxel contains a self-assembled nanograting that is oriented in a direction perpendicular to the light polarization. The distance between two adjacent spots is 3.7μm and the distance between each layer is 20μm. E: Electric field of light wave. Arrow: Polarization direction.

We have recorded the first digital documents (including copies of the Universal Declaration of Human Rights, Newton's Opticks, the Magna Carta, and the King James Bible) across up to 18 layers using optimized parameters (light pulses with energies of 0.2μJ and a duration of 600fs at a repetition rate of 500kHz): see Figure 2. To test the durability of this data-storage mechanism, we used accelerated aging measurements (see Figure 3). These tests reveal that the decay time of the nanogratings is 3×1020±1 years at room temperature (303K), showing the unprecedentedly high stability of nanostructures imprinted in fused quartz. Even at elevated temperatures of 462K, the extrapolated decay time is comparable to the age of the Universe (13.8 billion years). Based on the tests, we believe that these copies could survive the human race.9

Figure 2. Copies of (a) the King James Bible and (b) the Magna Carta imprinted in glass. 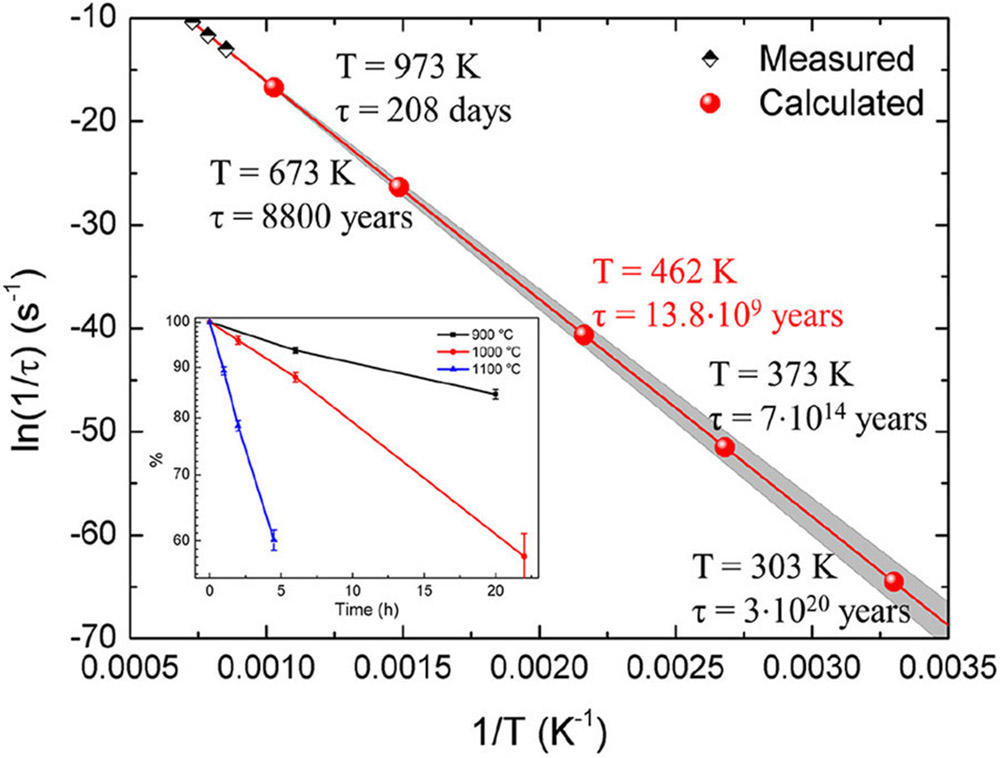 Figure 3. Arrhenius plot of the nanograting decay rate. The black dots indicate measured values and the red dots are calculated based on fitting results, showing the extrapolated lifetime of the stored data. The gray shaded zone indicates the tolerance of extrapolated values. Based on these results, the nanogratings would last for the current lifetime of the Universe (τ=13.8billion years) at a temperature (T) of 462K. The inset shows the decay of the retardance strength over time at different annealing temperatures (900, 1000, and 1100°C).

The addition of more states of polarization and intensities—currently limited by the resolutions of the slow axis orientation (4.7°) and the retardance (5nm)—could enable more than one byte (8 bits, or 256 possible combinations) per modification spot using the same birefringence measurement system. By recording data with a 1.4NA (numerical aperture) objective and a shorter wavelength (250–350nm), recording a disc with a 360Tb capacity (more than 7000 times today's 50Gb double-layer Blu-ray capacity) could be made possible.

We have developed an extremely durable 5D data-storage technique based on the imprinting of nanostructures in silica glass via femtosecond-laser writing. This technology, which we have coined ‘Superman memory crystal,’ could be produced on a commercial scale for organizations with large archives (e.g., national archives, museums, libraries, and private organizations). We believe that our method will also prove attractive for the consumer market if the cost of hardware (particularly the expensive femtosecond laser) is reduced.17 Additionally, a number of projects (such as Time Capsule to Mars, MoonMail, and the Google Lunar XPRIZE)18–20 could benefit from the technique's extreme durability, which fulfills a crucial requirement for storage on the Moon or Mars. With this technology, we may have finally achieved information immortality.21 In our future work, we plan to improve write speeds and to develop a microscope-free disc drive for data readout.