Lunar Flashlight is an innovative, low-cost mission that will use near-IR lasers to map water ice at the lunar south pole.
25 January 2016
Barbara Cohen

It is not necessary to go all the way to Pluto or similarly distant places to find the solar system's coldest locations. The Moon's small axial tilt and large, bowl-shaped craters mean there are regions at the lunar poles that have not ‘seen’ the Sun for billions of years. Coupled with the Moon's naturally low internal heat, these so-called permanently shadowed regions can be as cold as 25K (as measured by the Diviner instrument on NASA's Lunar Reconnaissance Orbiter1) and are thus some of the coolest places in the solar system. These cold traps are therefore logical places to search for trapped volatile compounds (e.g., water). Indeed, one of NASA's Strategic Knowledge Gaps is to detect the composition, quantity, distribution, and form of water/hydrogen species and other volatiles that are associated with the lunar cold traps.

The trapped volatile compounds in the Moon's permanently shadowed craters rain down from asteroids and comets as they impact the surface. Water is a vitally important resource in the solar system that enables several human activities in space (e.g., drinking, breathing, and making rocket fuel from local materials). Although it is known from radar and neutron spectroscopy measurements2, 3 that there is buried ice in the lunar subsurface, access to these stores requires small mining operations capable of removing meters of lunar regolith (soil). On the other hand, results from some Lunar Reconnaissance Orbiter (LRO) instruments hint at surface frost in the permanently shadowed regions.4, 5 Surface water ice (and other volatiles)—if they exist in sufficient quantities—would be valuable for in situ extraction and utilization by future human and robotic explorers.

In 2011, as part of NASA's Advanced Exploration Systems program, three low-cost 6U CubeSat missions were selected as secondary payloads on the first test flight (EM-1) of the Space Launch System (SLS) that is currently scheduled for 2018. These mission concepts include our Lunar Flashlight,6 as well as BioSentinel and Near-Earth Asteroid Scout. Early concept and engineering reviews have been completed for all three missions, and the projects are now proceeding into the next phases of development.7 In this work we describe the scientific goals and design of the Lunar Flashlight mission.

The main goal of the Lunar Flashlight mission is to determine the presence or absence of exposed water ice within permanently shadowed regions of the lunar south pole. Furthermore, we will aim to map the concentration of water (on the 1–2km scale) within the permanently shadowed regions to help guide future rover and human activities to the most promising locations. Once Lunar Flashlight has been ejected from the SLS in cis-lunar space, we will use a chemical propellant system to maneuver the payload from a low-energy transfer trajectory to lunar orbit. Lunar Flashlight will then be transferred to an elliptical polar orbit and will eventually spiral down to a perilune of 10–30km above the south pole for data collection. The spacecraft will impact the lunar surface at the end of the mission.8, 9

Lunar Flashlight will be equipped with near-IR lasers to illuminate (see Figure 1) the lunar surface as the satellite flies over the night side and the permanently shadowed craters. In addition, we will use an on-board point spectrometer to collect the reflected light from the lunar surface and create an albedo spectrum (from measurements at, or about, 1.4, 1.5, 1.8, and 2.0μm, see Figure 2).8,9 The presence of cold-trapped water at, or near, the lunar surface will modify the spectral reflectance and thus have a different signature to that of dry regolith. We will be able to determine the composition of the surface by distinguishing water ice from dry regolith in two different ways. First, water ice is much brighter in the continuum channels than dry regolith. Second, we use the reflectance ratios between the absorption and continuum channels to measure the amount of water ice present. The spectral data we collect will then be used to map the water content across the lunar surface. We will also be able to correlate this map with other data sets from previous missions (e.g., LRO). 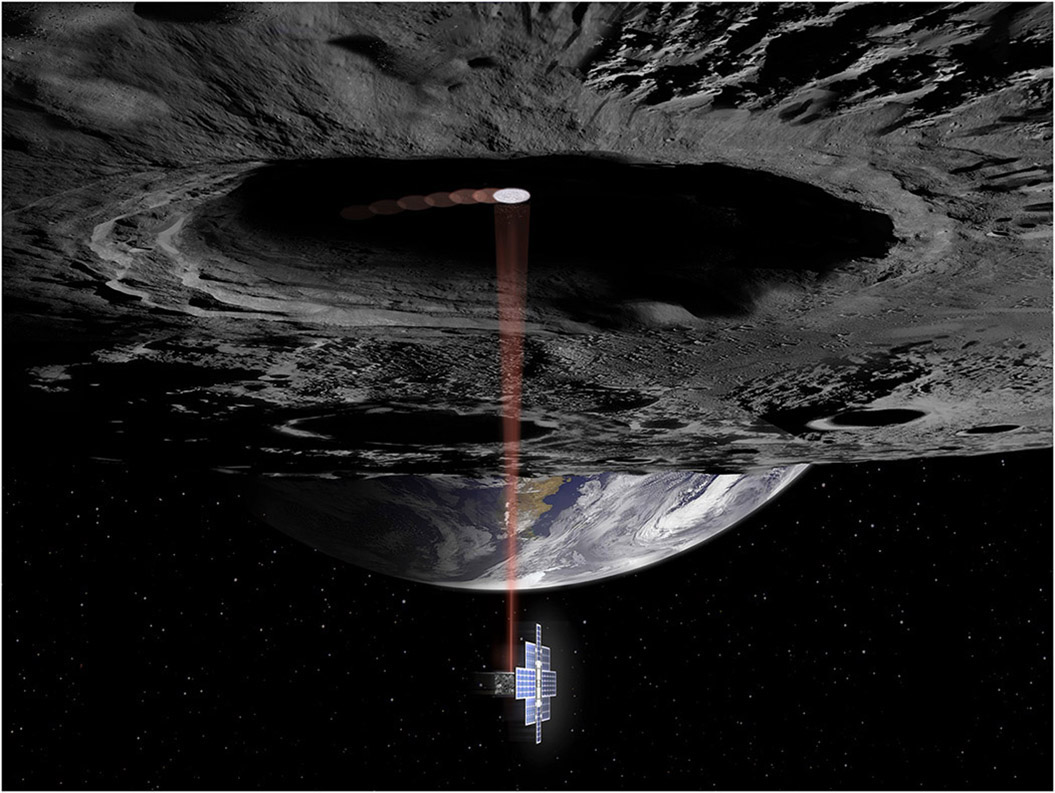 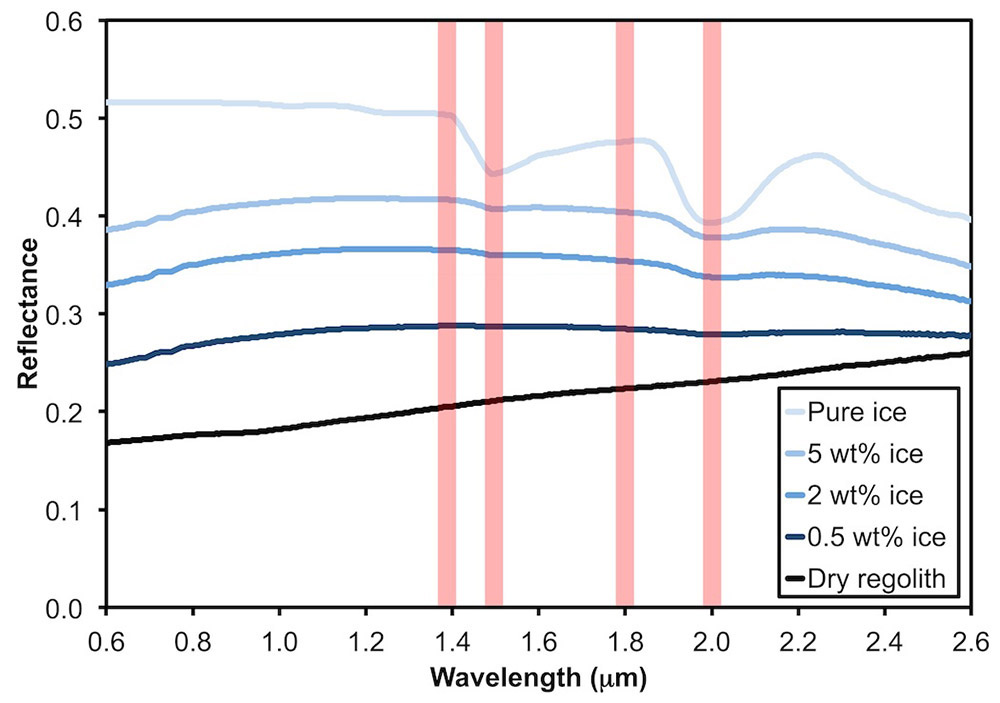 Figure 2. Modeled reflectance spectra for pure water ice, dry lunar regolith, and mixtures of the two at levels Lunar Flashlight is expected to measure. The red vertical lines illustrate the instrument's spectral bands. There are two each in the water ice absorption bands and short-side continuum.

We believe that two other missions that are currently also being considered for the EM-1 launch (Lunar IceCube and LunaH-Map) would be highly complementary to our Lunar Flashlight goals. With Lunar IceCube, passive reflectance spectroscopy would be used to measure water in the lit regions of the Moon, whereas LunaH-map would involve neutron spectroscopy measurements of sub-surface water at the lunar poles. Although each payload would use a different approach, the results from all three instruments would be synergistic. This would especially be the case when viewed as a fleet of tiny missions simultaneously exploring the nature and distribution of water on the Moon.

Lunar Flashlight will be a low-cost mission as part of NASA's first SLS test flight. The main scientific aim of the mission will be to detect and map the surface distribution of water ice at the permanently shadowed regions of the lunar south pole. This innovative mission will also demonstrate several new technologies, including being the first planetary mission to demonstrate remote reflectance spectroscopy using active illumination from orbit. The development of Lunar Flashlight is being undertaken by our team from NASA's Jet Propulsion Laboratory (JPL) and Marshall Space Flight Center (MSFC). We are thus able to leverage JPL's Interplanetary Nano-Spacecraft Pathfinder In Relevant Environment (INSPIRE) project and MSFC's expertise in propulsion systems. In the coming year, the Lunar Flashlight project will hold safety and design reviews, and will move into an implementation, integration, and test phase leading up to a 2018 launch. Lunar Flashlight and other interplanetary CubeSats are forging low-cost paths to accomplishing science goals and collecting measurements that will be critical to expanding human presence throughout the solar system.

Barbara Cohen is the head of the planetary science group at MSFC. She also serves within NASA by representing science interests and capabilities for human and robotic spaceflight planning. In addition, she leads several NASA research projects and is the principal investigator for Lunar Flashlight.