The picture of vortex centers aids understanding of resonances with infinite lifetimes (optical bound states in the continuum) and shows how their robustness arises from their topological properties.
09 March 2015
Bo Zhen, Chia Wei Hsu, Ling Lu, A. Douglas Stone, and Marin Soljačić

The existence of bound states in the continuum (BICs) was first proposed in quantum mechanics by von Neumann and Wigner in 1929 for the Schrödinger equation.1 The energies of these unusual solutions are high enough to escape to infinity; however, instead of having an extended mode profile they remain spatially bounded. In the field of optics, many studies have focused on developing analytical or numerical optical BIC solutions for the Maxwell equations, observing them experimentally, and understanding them.2–9 However, two questions remain unanswered so far. First, what is the fundamental nature of this unusual type of solution? Second, what is the mechanism that allows the BICs to exist in a robust manner?

We have observed optical BICs in photonic crystal slabs,10 which are dielectric slabs with a periodically modulated refractive index at the wavelength scale surrounded by air or a low-index medium: see Figure 1(b). The periodic modulation alters the dispersion relation of light and gives rise to photonic bands—see Figure 1(a)—analogous to electronic band structures in solids. In general, for modes above the light line, light is allowed to escape from the surface of the slab. Consequently, these modes are constantly losing energy and always have finite lifetimes. However, exceptions (BICs) exist, where light is perfectly confined in the slab—see Figure 1(b)—and the lifetimes of the BICs are infinitely long: see Figure 1(c).

Figure 1. Optical bound states in the continuum in photonic crystal slabs. (a) Band structure of a photonic crystal slab. The area shaded in blue is above the light line, and so modes in this region can, in general, couple to radiation and are resonances with finite lifetime. However, at particular wavevectors (circled in red), exceptions (bound states in the continuum, BICs) exist with infinitely long lifetime. (b) Mode profile of the BIC. (c) The radiative quality factor, Qr, of modes diverges at five wavevectors, indicating the existence of five BICs within this band. ω: Frequency. a: Periodicity of the square lattice in the photonic crystal slab, respectively. kx, y: Wavevectors.

Optical BICs in photonic crystal slabs were first predicted to exist at isolated high-symmetry wavevectors.2 This type of BIC does not couple to radiation due to the symmetry mismatch between their mode profiles and those of the radiation continuum. Recently, we have observed a new type of BIC that can exist at arbitrary wavevectors and is therefore unprotected by symmetry: see Figure 1(c).9 Although they seem drastically different from each other, we found that these two types of BICs share the same origin and can even interact with one another in a simple and direct manner.11

A simple way to label topological defects is with topological charges, which for BICs depend on how the polarization direction winds around the center. We examine our first example from Figure 1 further: there are five BICs shown as five bright spots in the radiative lifetime plot: see Figure 3(a). By plotting the distribution of polarization directions—see Figure 3(b)—we see five vortices at the same position as the BICs. Furthermore, depending on detailed information around each BIC, we label the topological charge they carry: the one at the center is with charge −1, while the four off-center are with charge +1. Topological charges of BICs are quantized and conserved quantities with many important implications.11 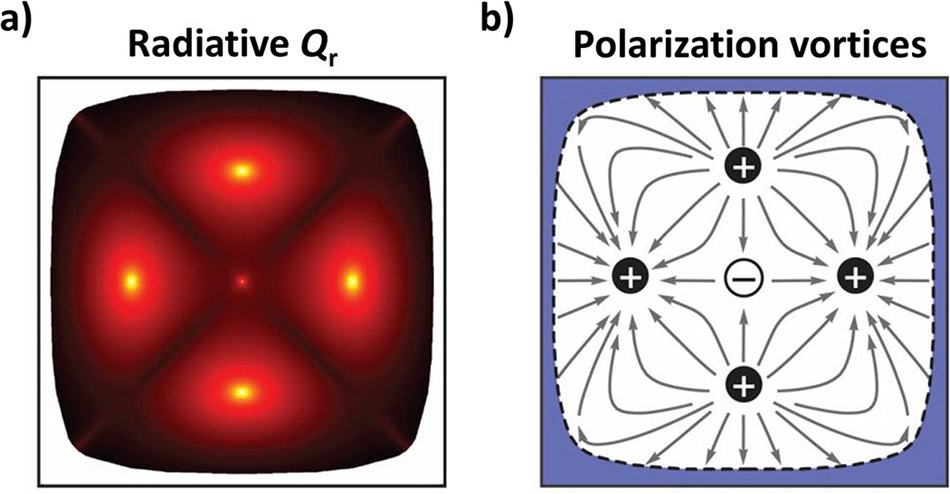 Figure 3. Topological charge of BICs in wavevector space. (a) Radiative quality factor as a function of wavevectors plotted for the same structure as in Figure 1(b). (b) The topological charges carried by different BICs, which are characterized by how the polarization vectors wind around them. The five vortices show up at the exact same position as the BICs.

Based on our work,11 there are a few theoretical directions we will now explore. Is it possible to unify all kinds of bound states in the continuum of electrons, photons, and phonons into this picture of topological defects? So far most of the effort exploring BICs is in linear systems. Solitons, which are a completely different phenomenon, come from the interplay between nonlinearity and dispersion, but they are also viewed as topological defects. Is it possible to build a more direct connection between these two distant physical phenomena? We believe this work is only the start of our understanding of this seemingly mysterious phenomenon of BICs.

The authors thank Chong Wang, Scott Skirlo, David Liu, Fan Wang, Nicholas Rivera, Ido Kaminer, Dr. Homer Reid, Xiaogang Wen, Steven G. Johnson, and John Joannopoulos for helpful discussion. This work was partly supported by the Army Research Office through the Institute for Soldier Nanotechnologies under Contract No. W911NF-07-D0001. BZ, LL, and MS were partly supported by the Solid State Solar Thermal Energy Center (S3TEC), an Energy Frontier Research Center funded by the US Department of Energy under Grant No. DE-SC0001299. LL was supported in part by the Material Research Science and Engineering Center of the National Science Foundation (DMR-0819762). ADS was partly supported by the National Science Foundation (DMR-1307632).

Bo Zhen received a BS in 2008 from Tsinghua University, China, and a PhD in 2014 from MIT. Since then, he has been working as a joint postdoctoral associate with Marin Soljačić at MIT and Mordechai Segev at Technion.

Ling Lu received a BS in 2003 from Fudan University, China, and PhD in 2010 from the University of Southern California. Since 2010, he has been working as a postdoctoral associate in Marin Soljačić's group.

Marin Soljačić is a MacArthur fellow and a professor of physics at MIT. He received his BS in 1996 from MIT, and a PhD in 2000 from Princeton University.

Chia Wei Hsu received a BS in 2010 from Wesleyan University, and a PhD in 2014 from Harvard University. In 2015, he joined A. Douglas Stone's group at Yale University as a postdoctoral associate.