The use of hostile fire indication systems (HFIs) to patrol ground and airborne forces is challenging in dense urban or civilian areas. Countermeasures against sparse and asymmetric forces with light firearms require precise retaliation and careful maneuvers using multiple HFI systems. A large number of vehicles and dismounted soldiers are involved, therefore the technology need to be affordable and capable of meeting requirements for low size, weight, and power (SWAP).

In recent years, military developers have deployed systems based on acoustics. An array of sensitive and spatially configured microphones receives sound waves created by the passing bullet (received first) and the muzzle blast (the heat and light generated by firing, and which is received last, due to the speed of sound being slower than the speed of a typical bullet). The system notes the respective time delays of their patterns as received by the microphones.1

Acoustics-based systems meet the low SWAP requirements, yet their performance severely deteriorates in dense urban environments. This is because of multi-path reflections and reverberations of sound waves, and because buildings can obscure the muzzle blast waves. Also, the accuracy of estimating the direction of arrival is limited by the distance between microphones and the geometry of the setting. Moreover, relying on the detection of shock-waves from passing projectiles makes it impossible for acoustics-based systems to provide situation awareness.

An alternative to acoustics is optical detection systems (FLASH, Weapon Watch, for example2), designed to detect the unique signature of the muzzle flash. Since visible-spectrum flash light is barely seen in daylight, optical systems exploit the mid- and long-IR spectrum, detecting the thermal radiation created by the flash. For this we can use either cryogenically cooled detectors (large, heavy and power-hungry) or uncooled micro-bolometer detectors. Uncooled detectors offer low SWAP, but have two significant shortcomings: low imaging speed (limiting the maneuvers and speed of the carrying platform), and low specificity (discriminating between muzzle blast flash signals and naturally occurring event signals). They thus have limited potential.

We propose an optical detection system at two spectral bands: short wavelength IR (SWIR) and visible (VIS).3–7 Uncooled SWIR sensors operating in the 1.0μm–1.7μm band are very effective at detecting the black body radiance emitted by a muzzle flash (with typical effective temperatures in the range of 1000K–2000K). The short wavelength and very high speed of SWIR-sensor focal-plane arrays allow for high spatial resolution and high specificity in isolating and detecting very fast transient events of the muzzle flash (which are typically shorter than 1ms).

To achieve very low false alarm rates with a SWIR-based optical HFI system, we propose two solutions. The first operates in a single SWIR band and uses specific features of SWIR light propagation physics to attenuate echoes (‘clutter’) and sunlight-reflected interference, respectively.6, 7 The sensors' high performance compensates for attenuation of the muzzle flash signal. The other solution adds a second optical channel in the visible band, whose task is to cancel out sun-glints and interference from incandescent light sources (car headlamps, road signs, and illumination) as the spectra of such interference sources is typically very different to that of a muzzle flash within the VIS-Near IR-SWIR spectrum7 (see Figure 1). 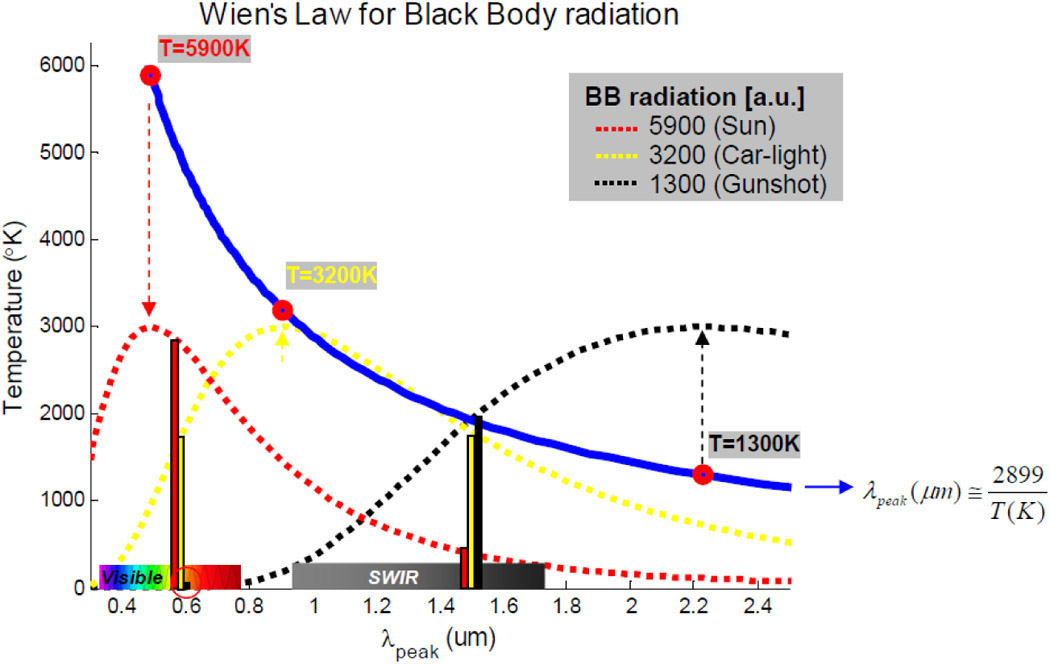 Figure 1. Wien's law of black body (BB) radiation shows a high color-rejection ratio between visible and short wave (SWIR) bands when comparing muzzle flash with an effective BB temperature of 1300K and interference (car headlamps, sunlight) with an effective temperature of 3200K and 5900K. Since the spectra of the interference sources is very different to that of gunshot in the visible and SWIR bands, the hostile fire indication systems can identify and eliminate them, reducing errors.

Our latest development is the integration of the SWIR sensor with a tactical radar sensor.7 This enables fine angular resolution of the optics combined with the range and velocity measurements of radar. It allows us to gauge the precise relative location of a missile launcher or gun that has fired a projectile at the platform carrying the HFI system. Once we have located the defending platform (using other measurement means) we can accurately estimate the location of the launcher. The close integration of the two technologies also allows for significant power savings in the radar transmitter design, simplifying its operation and reducing the probability of radio- frequency signal intercept.

HFI's signal-to-clutter ratio is inversely dependent on spatial resolution and exposure time (for very short muzzle flash events), therefore we anticipate the development of new SWIR focal plane arrays with larger formats and faster readout rates, to improve the performance of SWIR HFI systems. The challenge would then be implementing low SWAP signal processors that could cope with input data rates of 10s of gigabits per second.

Gil Tidhar is chief technology officer for electro-optics in the land and naval radars and systems division. He has 22 years' experience developing and testing optical and IR detection systems.