Reverse operation of dielectric-elastomer actuators may be used to scavenge energy from ocean waves or other random motion.
25 March 2011
Siegfried G. Bauer and Christoph Keplinger

Last year marked the 10th anniversary of the Stanford Research Institute's landmark Science paper on deformable capacitors based on elastomeric insulators with highly compliant electrodes.1 It showed that attractive electrostatic forces between positive and negative charges on compliant electrodes lead to high-speed, giant-strain, electrically controlled actuators, which have now exceeded the performance of natural muscles in terms of strain, stress, and elastic-energy density.

The perspectives of the field are discussed in a recent Science article,2 showing that such dielectric-elastomer actuators (or electroactive-polymer artificial muscle) have become areas of both intense academic research and industrial development. Electrically controlled optical lenses and phase gratings are already on the market,3 while a first mass-market application has been announced for mobile phones, providing users with vibro-tactile feedback.4 Key factors promoting the success of the technology are the simple physics behind the actuation (attractive electrostatic forces acting on soft, deformable dielectrics) and its cost-effective implementation with inexpensive materials.

The idea that a solid material deforms when stimulated by electricity originated in the late 18th Century, as documented in a letter by Alessandro Volta discussing observations of Felice Fontana on volume changes in electrified Leyden jars, the first electrical capacitors.2 In the late 19th Century, Wilhelm Conrad Röntgen designed an experiment, which is seen today as a beautiful description of the dielectric-elastomer-actuation principle.2 A rubber strip, when electrified by a corona discharge (which sprays opposite electrical charges on either side of the strip), shrinks in thickness and increases in length. Figure 1 shows a sketch of the experiment and a demonstration using simple household materials. 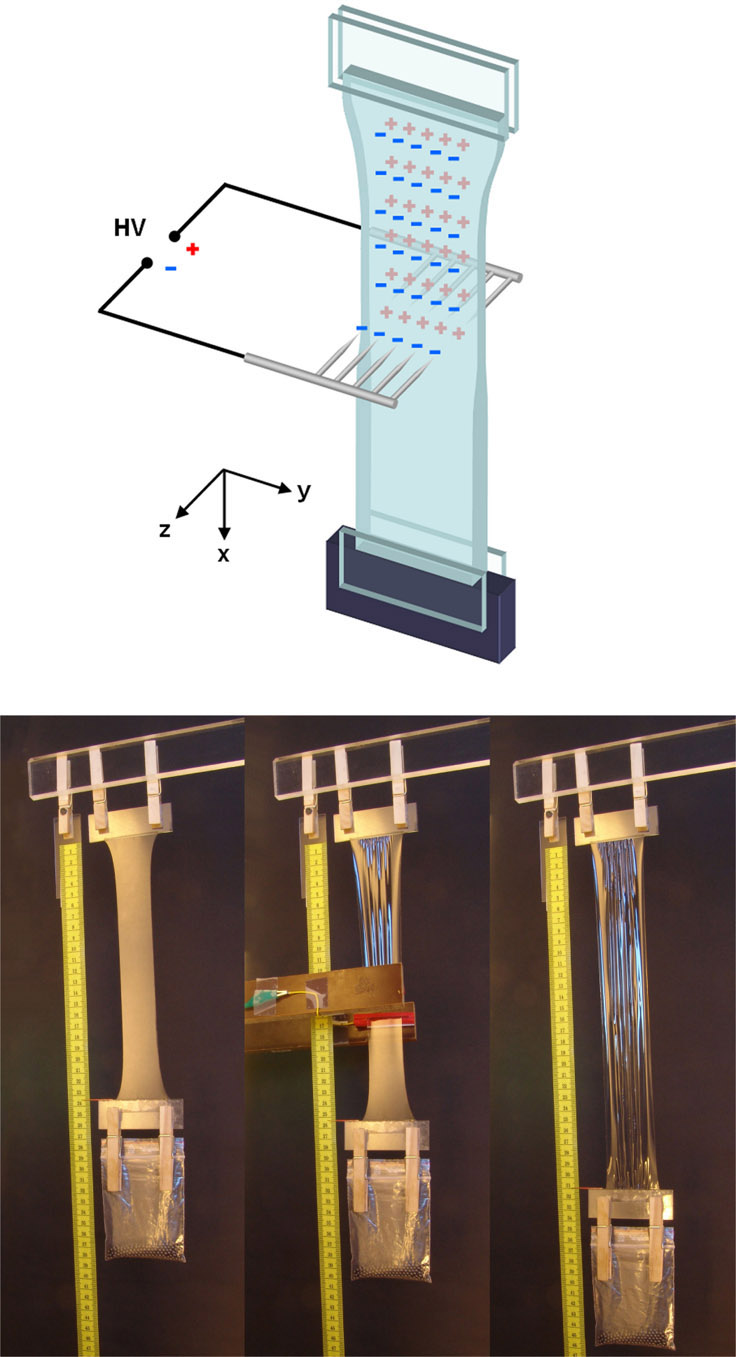 Figure 1. (top) Dielectric-elastomer-actuation principle anticipated by Röntgen in 1880 and (bottom) demonstration of the elongation of a stretched rubber strip after corona charging. HV: High voltage.

We replicated Röntgen's experiment with modern materials,5 showing that such charge-controlled actuation overcomes the electromechanical pull-in effect, i.e., the mechanical collapse of the deformable elastomer capacitor when electrostatic forces exceed elastic forces. Huge deformations can be induced by charge-controlled actuation, and remarkable movements of bending actuators can be demonstrated using noncontacting electrodes: see Figure 2(a) and (b). 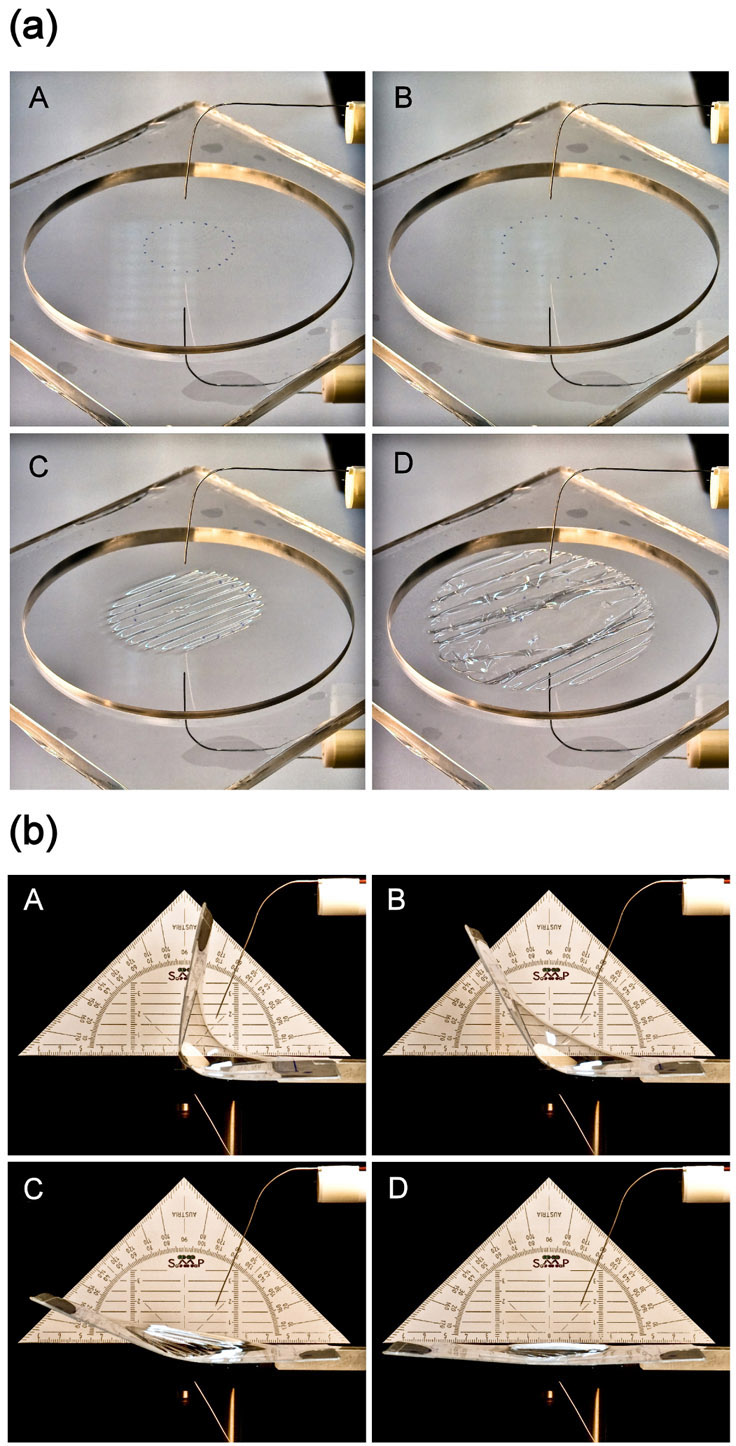 Figure 2. Large deformations of (a) a planar and (b) an electrode-free bending actuator.5

The most exciting challenge and new frontier of this technology lies in employing it in reverse: using wind, wave, or other renewable energy sources to deform elastomers and harvesting electrical energy as they return to the initial state. Extensive experimental assessments are in progress,6 including development of efficient cycles7 to maximize electromechanical efficiency at any strain8 and devising suitable electronics to boost voltages in self-priming circuits.9

The idea of energy scavenging with dielectric-elastomer actuators is best visualized in the thermodynamic approach of Zhigang Suo and his team at Harvard University. Work-conjugate plots, showing mechanical force versus strain and voltage versus charge—see Figure 3(a) and (b), respectively—define the gray-shaded areas that enable calculation of the maximum work that an elastomer can convert into electrical energy.

Figure 3. (a) Mechanical and (b) electrical work-conjugate plots demonstrating the potential of deformable dielectric-elastomer capacitors for energy scavenging. The gray-shaded areas describe the maximum amount of work that can be converted into electrical energy. The cycle in (b) illustrates how charges are taken from a low-voltage source and pumped up to the high-voltage storing source. (S. J. A. Koh, unpublished, with permission.)

The cycle shown with numbers 1 to 4 in Figure 3(b) illustrates how an elastomer takes charges from a battery at low voltage (1–2), boosts the voltage up (2–3), and delivers the charges to a high-voltage storage battery (3–4) before returning to the initial state (4–1). In one scenario, the low-voltage source could be a solar panel and the mechanical energy for deformation of the elastomer capacitor could come from wind energy or from the energy of ocean waves. Theoretical estimates anticipate energy densities around 1.7J/g.8

Electromechanical instabilities are often seen as a limiting factor in dielectric-elastomer transducer technology. But recent theoretical predictions show safe ‘snap-through’ instabilities at giant deformation ratios with sophisticated new materials.10An immediate question is whether such safe-instability scenarios are also possible with currently available materials, a question that will provide a rich field for experimentalists. Our current challenges in mechanical-energy harvesting from environmental sources include development of optimized cycles to maximize electromechanical efficiency at any strain.

Christoph Keplinger finished his master's thesis in 2008 at the Soft-Matter Physics Department. He is currently working on his PhD using dielectric elastomers for actuation and energy harvesting. In 2010, he spent six months with Zhigang Suo at Harvard University.